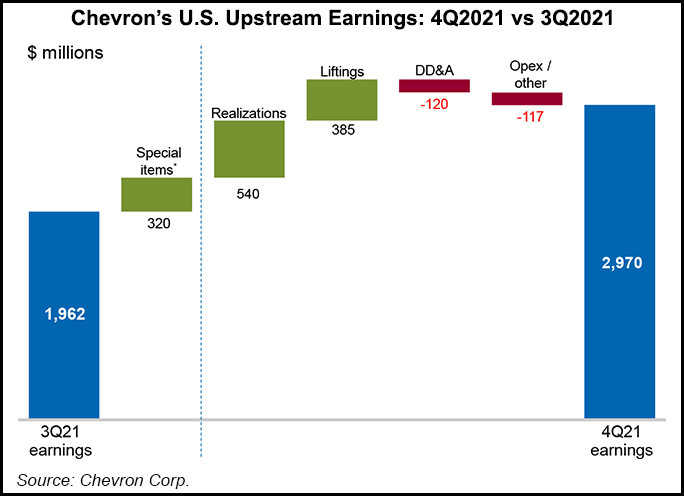 Wirth and CFO Pierre Breber held court with financial analysts to discuss the quarterly and full-year 2021 results during a conference call. The third and fourth quarters of 2021, Wirth said, were “the best two quarters our company’s ever seen…If we continue to see an environment like this, the balance sheet doesn’t need to be a lot stronger than it is today.”

Chevron still plans to remain “disciplined on capital,” said the CEO. The dividend has been increased, but there’s “one lever left” to pull: “returning cash through share repurchases…at least, in an environment like this.”

Most of the global operations for the final three months of 2021 performed up to speed, boosted by strong natural gas and oil prices, along with production gains in the Permian Basin.

“Broadly speaking, the Permian is healthy and getting better,” Wirth said. “I think 2022 Permian production will be a little bit better than we showed…last March and roughly speaking, up maybe 10% compared to the full-year average in 2021.” The Permian “is the largest piece of what we would anticipate in terms of production growth next year.”

“More uptime” also is expected at the Gorgon liquefied natural gas (LNG) export facility in Western Australia, which Chevron operates. Gorgon has had operational issues with some of the trains at the 15.6 million metric ton/year plant.

During the fourth quarter, volatile global LNG prices at the Dutch Title Transfer Facility and the Japan-Korea-Marker (JKM) caused a drag because of timing effects, Breber noted.

Chevron had a “swing between the third quarter and fourth quarter,” the CFO said. There was a gain in 3Q2021 and a “negative swing” in the final period.

“About half of the effects in the fourth quarter were due to a negative inventory charge,” Breber said. “We had cargoes on the water at year end. They get valued into inventory at average annual prices, which are well below the purchase price.”
The effect should “reverse itself…this year when they’re sold at the higher prices than they were purchased for,” Breber noted. The balance of the timing effects were one-time mark-to-market effects “tied to physical cargoes…” Those would unwind when the physical cargoes are delivered.

“We ended the year with a positive mark-to-market, but not as positive as what we had at the end of the third quarter,” Breber told analysts. “We added some JKM shorts during the quarter to balance our portfolio. We’re still net long JKM, so any effects going forward will depend on the direction of future prices.

“All this activity is really just geared toward managing our overall price exposure between our sales agreements and our supplies, which are a mix of both Brent and JKM prices.”

While the positions “are not very large…when we have LNG price movements that have gone from $10 to $20 to $30/Mcf, it’s causing larger timing effects than you would normally see.”
Chevron has some international contracts that have additional taxes and royalties “that kick in essentially when oil and LNG prices are higher,” Breber said. “We don’t share specifics on our contracts, but…we had extraordinarily high LNG pricing of $30, and then we also had oil prices that increased during the year.”

Chevron had anticipated having fewer LNG cargoes in 4Q2021 “because our long-term contracts were going to be higher during the winter from our primarily Japanese customers…We didn’t produce as much out of Australia, so we had fewer LNG spot cargoes.

“And again, that was an opportunity missed, and that resulted in lower earnings and cash flow.” Overall, however, Chevron posted the strongest profits since 2014, coming off the damaging  year of 2020 when Covid swept the world.

Where Does Chevron Expect To Grow?

“After the challenges of 2020,” Wirth said, “we began last year clear-eyed about the economic realities we faced, and at the same time optimistic about an eventual recovery. By the end of 2021, we had one of our most successful years ever.”

“We’ve made the most of this challenging period, transforming Chevron through a well timed acquisition and an enterprise-wide restructuring into a leaner and more productive company,” Wirth said.

Production grew in 2021 to a record 3.10 million boe/d, and Chevron added 1.3 billion boe net proved reserves. The largest net additions were from assets in the Permian, the Gulf of Mexico and Australia.

U.S. upstream profits climbed sequentially on the sale of Permian and Colorado assets and from higher commodity prices. An uplift in Permian production also contributed to the earnings gains. In addition, Chevron benefited from the absence of continued impacts from Hurricane Ida, which struck Louisiana last summer.