Chevron Corp. is partnering up with Brightmark LLC to produce and market dairy biomethane at sites across the United States. 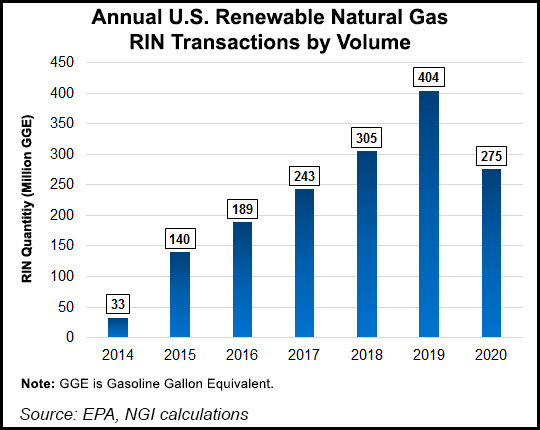 Financial details of the equity investments by subsidiary Chevron U.S.A. Inc. and Brightmark in the joint venture (JV) were not revealed. However, the plan is to fund and construct infrastructure and commercial operations in “multiple” states.

“We are increasing renewables in support of our business, making targeted investments and establishing partnerships as we evaluate emerging sources of energy and the role they will play in our portfolio.”

The investment, said Walz, “builds on our other RNG initiatives,” which include a JV with California Bioenergy and an Adopt-a-Port initiative with Clean Energy Fuels Corp. announced earlier this year.

San Francisco-based Brightmark, which bills itself as a “global waste solutions provider,” has partnered on biogas projects with 20 dairy farms in six states. Dairy manure is converted into RNG that is then injected into gas pipelines.

In one project, three Western Michigan farms are providing waste as feedstock for anaerobic digesters in Brightmark’s Castor project. Expected to be fully operational in early 2022, Castor is expected to produce about 328,500 MMBtu/year, which would be Brightmark’s largest RNG project to date.

Once all of its projects are operational, Brightmark said it would be producing enough RNG a year to drive 5,100 18-wheeler trucks from San Francisco to New York City.

“Our mission at Brightmark is to reimagine waste by creating innovative solutions like RNG projects,” said CEO Bob Powell, who founded the company. “This joint venture is a powerful partnership that will accelerate Brightmark’s ambition to achieve a global net-zero carbon future.

“It is imperative that Brightmark develop these lifecycle carbon negative projects all over the world, and this is a huge step forward in that process. Our RNG projects also deliver a true ‘win-win’ in terms of driving sustainable agriculture with significantly less waste and improving economic development in rural communities.”

The project when completed should generate 171,000 MMBtu/year of RNG, which would be injected into the interstate gas pipeline system. “Greenlane’s industry expertise and track record in designing and providing biogas upgrading systems were exactly what we were looking for in a partner as we continue to grow our RNG project portfolio,” said Powell. “This helped us de-risk and conclude the project financing, an important step prior to starting construction.”