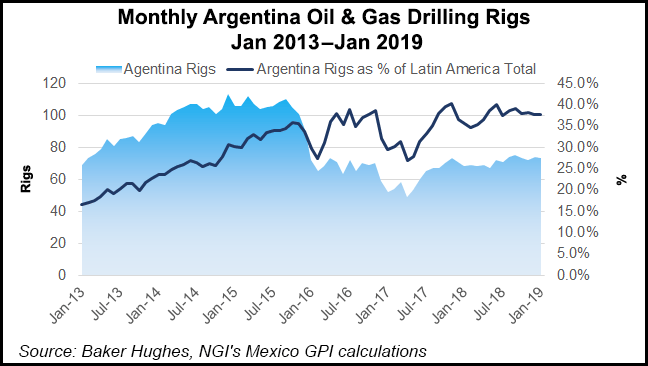 Executives sees the potential for about 2,000 wells at the El Trapial, Loma de Molle Norte and Narambuena deposits.

“We believe these three areas could offer an incremental 2 billion boe of resource,” said upstream chief Jay W. Johnson, executive vice president. He spoke during the annual analyst security conference in New York City as part of a forum with the entire executive team.

In terms of infrastructure, Johnson said “if those pilots are successful, there is already an existing oilfield in El Trapial, so there is some basic infrastructure already in that general area.

But clearly with the capacity that we could go to, we’d have to see some further build out of infrastructure.”

The company said infrastructure in southern Vaca Muerta at Loma Campana, where it has a joint venture with state oil company YPF SA, “is really not a limitation, it’s just been…at what pace do we want to develop.”

Loma Campana development costs are estimated at $11/boe, with average well lengths of 7,500 feet. Estimated ultimate recovery has increased by 80% since 2016 and development costs have decreased by 45%. The focus for 2019 is on “high density completions” and improving hydraulic fracture efficiency.

The company is planning 60-70 horizontal wells across the 210,000 net leasehold in Vaca Muerta this year.

Chevron’s partner YPF is planning a capital expenditure budget of $4-5 billion over the next four years across Argentina, with plans to operate 18 rigs and drill 1,700 unconventional wells in Vaca Muerta through 2023.

Although the government of Argentina President Mauricio Macri has been rocked by recession, high inflation and capital flight leading to the need for a massive $50 billion bailout loan from the International Monetary Fund (IMF), the advances in the country’s energy sector in the past three years have been profound.

“Despite the macroeconomic and monetary challenges, the progress the Macri administration has achieved in reshaping the gas market environment is remarkable, helped in no small part by the prolific shale gas resources of the Vaca Muerta,” said Wood Mackenzie’s Mauro Chavez, Latin America gas and liquefied natural gas analyst.

Regulatory changes leading to better market conditions for producers, coupled with rapid increases in natural gas production from Vaca Muerta, allowed Argentina to resume gas exports to Chile in 2018, and plans are in place for small-scale LNG exports in 2019.

In mid-February, the Argentine government held two auctions for firm gas contracts between producers and distribution companies, a first step toward a market-based pricing mechanism. Around 37.8 Bcf of gas was contracted for April to March 2020, worth around $1.8 billion, according to Wood Mackenzie. The average price fetched was $4.56/MMBtu.

“These were the first open auctions for contract volumes in this category since the government started working toward creating a more competitive gas market. Industry was generally very positive about the auctions,” Chavez said. “Despite the challenge that remains, the new auction platform provides for a transparent and legitimate market price formation mechanism, allowing producers and buyers to plan their businesses and future investment.”

One of those challenges is developing the infrastructure needed to get the gas to market. Wood Mackenzie analysts suggested the need for a planned $2 billion pipeline from NuequÃ©n to San NicolÃ¡s, along with the expansion of other pipelines “to support a second ramp-up of Vaca Muerta production, as well as to increase gas exports to Chile and Brazil.”

On Sunday (March 10), NeuquÃ©n will hold gubernatorial and legislative elections. The two leading candidates are current pro-oil governor, Omar GutiÃ©rrez, and RamÃ³n Rioseco, who is aligned with ex-president Cristina FernÃ¡ndez de Kirchner. If Rioseco were to win, policies favorable to the development of Vaca Muerta could be scrapped. Argentina also goes to the polls later this year to elect a president.