Chevron Corp. announced a $33 billion merger with Anadarko Petroleum Corp. to create the No. 1 U.S. producer with a plethora of expanded natural gas and oil opportunities worldwide. 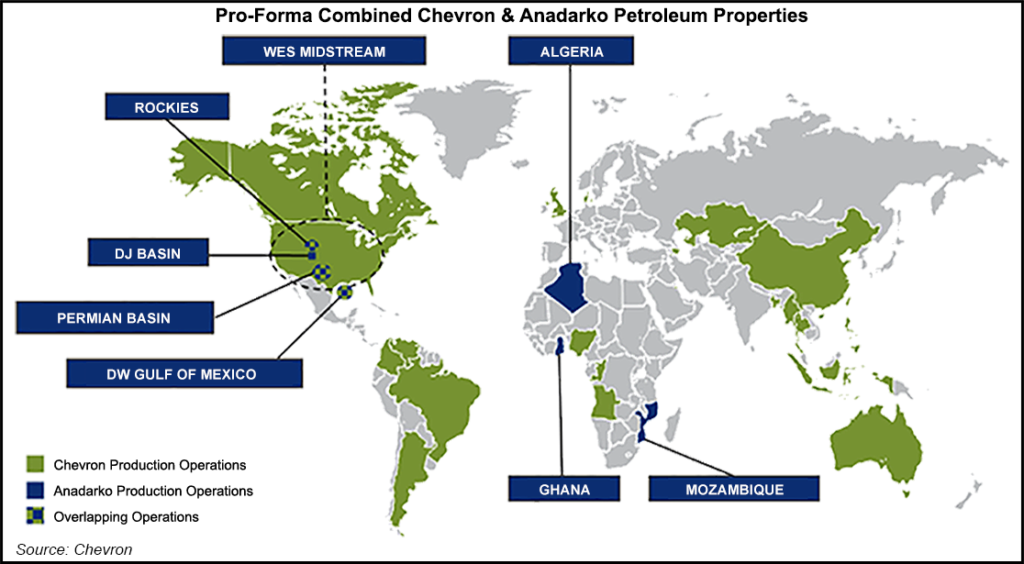 The total enterprise value of the stock-and-cash transaction announced Friday, including net debt, is estimated at $50 billion. Chevron’s portfolio would be expanded in the Permian Basin, deepwater Gulf of Mexico and within its already substantial liquefied natural gas (LNG) export business, CEO Michael Wirth said Friday.

In the Lower 48, the combination would create a 75-mile-wide corridor across the most attractive acreage in the Permian’s Delaware sub-basin. Anadarko is also the biggest operator in Colorado’s Denver-Julesburg (DJ) Basin.

The Chevron chief emphasized the Anadarko merger was not “just a shale deal,” but rather would unlock opportunities around the world, creating “significant value for shareholders, generating anticipated annual run-rate synergies of approximately $2 billion, and will be accretive to free cash flow and earnings one year after close.”

Chevron currently ranks as the world’s 10th largest oil and gas producer, while Anadarko ranks as the 41st largest. Once combined, Chevron would climb into seventh place, according to Rystad Energy. The new entity would jump ahead of Royal Dutch Shell plc and BP plc, trailing only ExxonMobil Corp. and the five biggest national oil companies.

Chevron eclipsed Wall Street earnings expectations for 4Q2018, with Australian LNG exports from Gorgon and Wheatstone, along with surging Permian production, lifting output by 12% year/year to 3.1 million boe/d. For the full year, oil and gas production climbed about 7% from 2017 to 2.93 million boe/d.

For the LNG portfolio, Chevron would gain a substantial resource base in the Anadarko-led Mozambique export project, which is expected to be sanctioned soon. Chevron also is advancing the KM LNG export project offshore Kitimat in British Columbia with Australia’s Woodside Energy Ltd.

In addition to the myriad exploration and production (E&P) opportunities, Anadarko’s midstream unit Western Midstream Partners LP has assets that “are well aligned with the combined companies’ upstream positions, which should further enhance their economics and execution capabilities,” Wirth said.

Before Friday’s merger news, Chevron had forecast it would surpass its production milestones in 2019 with another 4-7% increase, based on $60/bbl Brent oil prices.

Anadarko is one of the biggest employers in the Houston area with long and deep ties to the area. Initially formed in 1959 following a huge natural gas discovery in the Anadarko Basin, the operator has since discovered a plethora of oil and gas across the world.

Anadarko CEO Al Walker said the combination would “form a stronger and better company with world-class assets, people and opportunities. I have tremendous respect for Mike and his leadership. team and believe Chevron’s strategy, scale and operational capabilities will further accelerate the value of Anadarko’s assets.”

Besides its bulging U.S. portfolio and LNG projects, Anadarko has myriad overseas investments in Algeria, Australia, Colombia, Guyana and Peru.

Chevron takeover of Anadarko is likely to “shake up the U.S. upstream sector, analysts said.

The combined portfolios of Chevron and Anadarko would create the leading U.S. producer, with forecast production of more than 1.6 million boe/d, according to GlobalData.

“The deal is the largest acquisition by a supermajor since Royal Dutch Shell plc acquired BG Group for $53 billion in 2015,” GlobalData upstream analyst Jonathan Markham said. The acquisition is a continuation of Chevron’s recent focus on upstream operations in the United States, he noted.

Chevron’s Permian position would provide more than half of the total Lower 48 output, with the DJ providing another 25% of domestic onshore production, according to GlobalData.

“Potential mergers and acquisitions were a frequently discussed topic during fourth quarter 2018 conference calls, and it’ll be interesting to see whether this sets off a wave of merger activity among other U.S. producers,” said NGI’s Patrick Rau, director of strategy and research.

“Chevron and Anadarko are both large-cap producers with international E&P holdings and LNG interests, so their reasons to combine are driven by more than just trying to achieve better scale for their U.S. operations.

“But such scale matters, and small- to mid-cap U.S. producers may struggle to achieve that relative to their larger peers in this new ‘lower-for-longer’ price environment. Improved efficiencies are particularly important these days, now that E&P companies are being much more heavily scrutinized by investors who want them to increase their returns on invested capital.”

Rystad Energy’s head of research Per Magnus Nysveen noted that Anadarko has long been considered to have the “best positioned acreage in the sweetest spot of the Permian Delaware Basin. Combining these shale assets with Chevron’s strong legacy position in the same area, we will now see Chevron emerging as the clear leader among all Permian players, both in terms of production growth and as a cost leader.”

The combined company “will be by far the largest producer in the Permian, which is the fastest growing basin in the world, well ahead of ExxonMobil,” Nysveen said. “By 2025, the merged entity will be able to produce as much 1.6 million boe/d from the Permian Basin alone.”

Wood Mackenzie senior analyst Roy Martin said Chevron would “join the ranks of the ultra majors, and the Big Three becomes the Big Four.” Chevron would be the No. 2 ultra major after ExxonMobil, followed by Shell and BP plc.

“The acquisition makes the majors’ peer group much more polarized,” Martin said. “ExxonMobil, Chevron, Shell and BP are now in a league of their own. The deal plays to Chevron’s strengths, which are tight oil and LNG. On top of this, it diversifies their growth options, while also giving them more in tight oil.”

By expanding its Permian Delaware position, Chevron “ought to be able to do more with the acreage than Anadarko, which lagged behind in terms of well productivity.”

The deal will also see Chevron assert itself even more as the leader in low-royalty assets in the U.S. onshore, said Wood Mackenzie’s Robert Clarke, Lower 48 research director. “Chevron should truly outperform on cash flow and payback metrics for tight oil.”

Rystad CEO Jarand Rystad said, “Energy giants recognize that they need to invest more in the shale sector and in renewable energy. At the same time, due to the lower cost of capital prevalent today, it makes sense for modern E&P companies to favor higher leverage and lower equity share, and instead use debt capital to fund investments and operations, while enhancing shareholder value through share buy-backs and higher dividends…

“This acquisition represents a golden opportunity for Chevron to achieve a more leveraged capital structure that is better suited for the lower risk energy projects of the future.”

Chevron is paying an estimated 37% premium for Anadarko, but even so, “we think the deal value price of $50 billion is surprisingly good for Chevron,” Rystad’s Nysveen said. “The implicit oil price in the deal is $60/bbl, while oil price today is $71/bbl. Adding synergies, we see a strong potential for value capture here.”

Tudor, Pickering, Holt & Co. Inc. analysts said more majors may jump into the M&A waters with the tie-up. Although they were “surprised by the timing” of the transaction, “we understand the unique opportunity to enhance multiple facets of the business at a discount…

Anadarko “will greatly enhance the business’ opportunity set, with a contiguous 240,000 net acre position in the Permian overlapping Chevron mineral ownership, a greatly expanded Gulf of Mexico infrastructure footprint, which extends the tie-back opportunity set, and a world-scale LNG development in Mozambique that fits well in Chevron’s global gas portfolio.”

Miller/Howard Investments suggested the likelihood was low of “another bidder” for Anadarko emerging, but it’s not zero, analysts said.

Occidental Petroleum Corp. reportedly was said to be in the hunt to buy Anadarko. CNBC reported Anadarko was offered $70/share by Occidental, but the board accepted the lower deal, which Miller/Howard analysts said could be “because it involved more cash and less stock…stay tuned on this.”

The transaction is expected to achieve run-rate cost synergies of $1 billion before tax and capital spending reductions of $1 billion within a year of closing at $60/bbl Brent oil prices.

Once completed, Chevron plans to divest up to $20 billion of assets between 2020 and 2022 to reduce debt. As a result of higher expected free cash flow, Chevron also plans once the deal is closed to increase its share repurchase rate to $5 billion/year from $4 billion.

The acquisition is structured as 75% stock and 25% cash, providing an overall value estimated at $65/share, based on Chevron’s closing price on Thursday (April 11). Once completed, Chevron would issue around 200 million shares of stock and pay about $8 billion in cash. It also is assuming $15 billion net debt. Total enterprise value of $50 billion includes assuming the net debt and book value of noncontrolling interest.

The transaction has been approved by each board and is set to close before the end of the year. The acquisition still needs Anadarko shareholder approval and is subject to regulatory approvals.

Wirth would continue to lead the combination as CEO and chairman. Chevron also plans to retain its headquarters in San Ramon, CA.