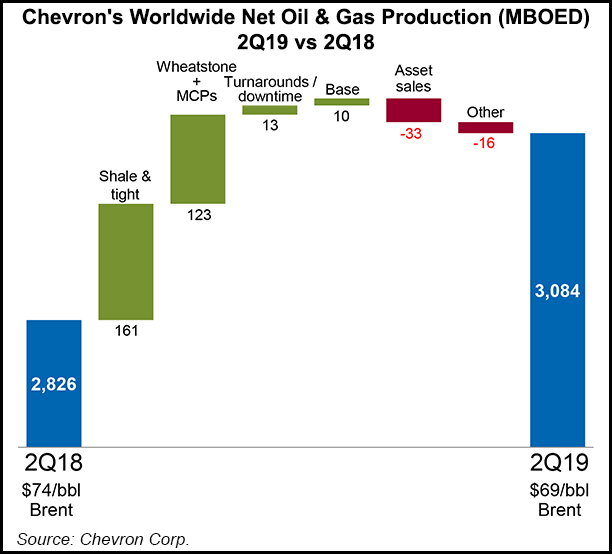 Chevron, which was eyeing synergies from Anadarko’s massive global portfolio, which includes LNG, was beat by a higher offer from Occidental Petroleum Corp. During a second quarter conference call, CFO Pierre Breber said Chevron already has turned the page on that busted merger, but it’s looking ahead to more ways to build its LNG empire, now centered around two massive Australian export projects, Wheatstone and Gorgon.

“Adding LNG is something that absolutely we are interested in doing” Breber said. “We’ve got a great position in Australia…that’s generating a lot of cash. We have opportunities to debottleneck and potentially add to that over time…

“We’re always working the portfolio, and LNG is one of the asset classes that we’re interested in, and we will pursue opportunities in that space.”

The Australian LNG projects produced “over and above” what was expected during the second quarter, with the extra cargoes exposed to spot prices, but some purchasers exercised the flexibility in their contracts, upstream chief Jay Johnson told analysts.

“There is also an element even in our fixed-term contracts where we had about a three-to-six months delay in the oil pricing that they’re linked to,” he said. “Going forward, we do expect to see increased production as reliability has been higher, and our overall goal would be to turn that up and get closer to what our expected production is as we gain continued confidence in the reliability of the facilities.”

Overseas net natural gas production increased 10% year/year to 6.2 Bcf/d. The average realized price for overseas gas was $5.43/Mcf, versus $5.64 a year ago. Crude and liquids realized prices from the overseas operations averaged $62.00/bbl, down from $68.00.

Year-to-date, Chevron’s oil and gas output worldwide, excluding asset sales, is about 5% higher year/year, consistent with guidance of 4-7%, Johnson said. There were solid gains across the portfolio, from overseas and into the deepwater Gulf of Mexico. Unsurprisingly, the Permian Basin drove Lower 48 operations.

Across its legacy Permian holdings, Chevron now is running 20 operated rigs, with another seven to 10 net nonoperated rigs working.

“We’re building out infrastructure, of course, and we always have some exploration activity out in front of us,” Johnson said of the massive play, where Chevron expects to more than double its output to 900,000 boe/d by 2023.

While Permian oil and natural gas liquids (NGL) takeaway is mostly covered through 2020, moving natural gas from the basin is still less secure.

Chevron already has 100% “flow assurance” for its Permian oil and liquids through 2020. For natural gas, the supermajor initially ensures it has flow assurance to move gas production from the Permian without having to flare it or require mitigating production, Johnson explained.

Today, “about 20% of our gas can be exported from the basin,” and by the end of this year “we expect that to be about 25%,” Johnson said. Close to 60% of the Permian gas should have export options by the end of 2020, giving Chevron “more exposure to other price structures, rather than just Waha.”

US upstream earnings fell year/year to $838 million from $896 million, while domestic downstream profits declined to $465 million from $657 million. In the international operations, the upstream arm earned $2.59 billion, compared with $2.46 billion in the year-ago quarter. The gains were attributed to higher natural gas sales volumes, as well as tax benefits from reducing activity in the Alberta operations.