The days of freely spending money at Chesapeake Energy Corp. are through as capital discipline takes over from wheeling and dealing, CEO Doug Lawler said Thursday. 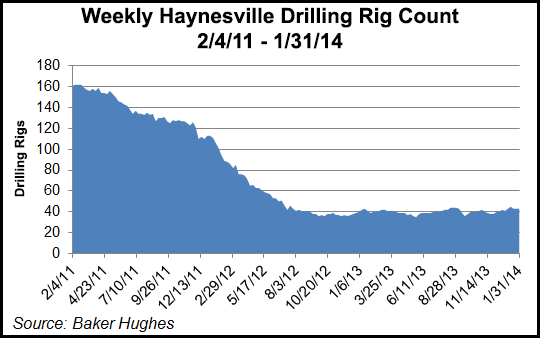 Last year was “transformational,” and this year will be “formational,” he said during a conference call to discuss the 2014 outlook. To do that, the debt-burdened explorer is cutting capital spending by 20% from 2013’s midpoint to $5.2-5.6 billion. In addition, asset sales would be used to close a funding gap that this year may approach $1 billion.

“The inefficient production growth of the past was not being correlated to previous capital spending,” Lawler said. “In other words, not all capital expenditures contributed to production growth.”

The dig was directed at the former management team, led until last April by co-founder Aubrey McClendon, who was forced out. McClendon spent profligately from the beginning of the unconventional drilling boom in the early 2000s to secure some of the biggest leaseholds in the United States. However, the leaseholds within the next few years — then targeting low-priced natural gas — burdened Chesapeake with so much debt that it came close to defaulting on loans.

All of Chesapeake’s opportunities going forward are to drive estimated ultimate recoveries from the wells that are drilled, Lawler said. If they don’t meet the criteria, a bundle of additional onshore properties are to be sold.

Most of the capital this year will be directed to three oily and liquids plays: Eagle Ford Shale (35%), the Midcontinent operations (20%), and 15% to Utica Shale liquids targets. Plans are to increase oil production by 8-12%, with a 44-49% jump in natural gas liquids.

Capital has been cut in the gassy Marcellus Shale by 5%, with only one rig targeting dry gas and six or seven targeting liquids. One rig also would be operating in the Barnett Shale, with capital costs cut by 5%.

Natural gas, still Chesapeake’s top reserve, should see growth of 4-6% this year. Notably, seven to nine gas rigs are to operate in the long-neglected Haynesville Shale. The discovery by Chesapeake in 2008 was expected to eclipse all onshore gas plays, only to be beaten eventually by Marcellus gas, McClendon presciently noted in 2009 (see Daily GPI, June 1, 2009).

The Haynesville is getting a second look today because it’s “simply…a world-class gas asset that has not been optimized with respect to capital efficiency,” said Lawler. All of Chesapeake’s acreage is held by production, so it’s not about securing leasehold. “The opportunity there, we see it as very, very competitive.” Chesapeake had six rigs running into late November, when it added one more to end the year. Two more rigs are to be raised in the East Texas/North Louisiana play this year.

“We’ve already recognized with the base level of rigs that we planned in 2013 significant cost improvements,” the CEO said. “Those cost improvements make the Haynesville a much more competitive investment for the company” than the Marcellus dry gas area. “It’s an area that we believe has significant growth potential for the company…We see excellent value there and minimum volume commitment…

“We’re looking at how we can drive the greatest value for the capital that we invest. And the Haynesville’s a very attractive area for us. If you compare it to the Marcellus, the question there is, how do we efficiently grow the portfolio in the best way optimally?..How does it further increase, optimize the value of the company? So that’s what’s driving some of that rig distribution.”

According to Baker Hughes, after a precipitous drop from the 162 rigs that were targeting the Haynesville during February 2011, a leveling off has occurred over the last year and a half. Since July 2012, between 35 and 46 rigs have been operating in the play on any given week.

Oil and liquids still are the primary targets, however. Chesapeake recently had as many as 100 rigs operating in the U.S. onshore. This year it will have 55-65. Of the total, 15-18 rigs are to run in the Eagle Ford; 15-17 in Midcontinent operations; seven to nine in the Utica; three in the Powder River Basin’s Niobrara formation; and one in the Barnett Shale.

A second priority this year, said the CEO, “is to materially improve the balance sheet with debt reduction and reduced complexity…Disciplined capital allocation, budget and cost leadership programs are now in place…”

It’s not necessarily a strategy of “shrink to grow,” he told analysts. Instead, the teams are focused on “how can we capture the most value from the portfolio of assets that we’ve got. I think that everyone is aware that we have a tremendous portfolio, a lot of strength, and so when we apply the competitive capital allocation…what areas are going to attract capital within that competitive process? We’re going to be continuing to work at it, not just in the current year…but over the three- and five-year time period…

“We’ll be making divestitures accordingly that will be to how that capital spend…can be optimal.”

Improving capital efficiencies have allowed Chesapeake this year to reduce capital spending and cut the wells connected to sales by 8%. The ongoing cost control initiatives are anticipated to lower per-unit production and general/administrative (G&A) expenses, with production costs forecast to fall 10% from the midpoint of 2013 ($4.25-4.75/boe). G&A should drop by close to 25% from 2013 to $1.35-1.60/boe.

The guidance doesn’t reflect the impact of potential sales, which will be used to continue to high-grade the portfolio, said Lawler.

CFO Nick Del’Osso told analysts that gathering and transportation costs have increased, particularly in the Eagle Ford, Utica and Powder River Basin. Those higher costs have a lot to do with infrastructure buildout, he explained. “Thus, the cost per Mcfe in these areas is relatively high in our overall blended differential number…”

Wells Fargo Securities analysts said the absolute production growth estimate was well above its 1% year/year growth and added that the planned capital budget “is also a positive, as the Street was at $6.1 billion while we were at $5.5 billion for exploration/development.”