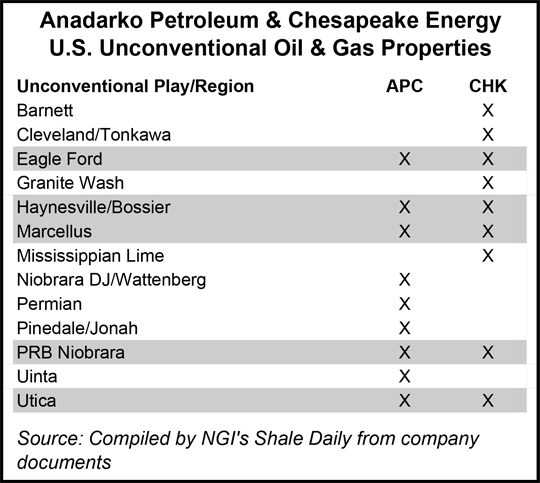 Lawler is to join the company on June 17 and would be only the second CEO ever to lead Chesapeake, following the departure in April of co-founder and charismatic leader Aubrey McClendon.

Lawler now helms Anadarko’s International and Deepwater operations, but he previously directed operations in the Marcellus, Haynesville and Eagle Ford shales, the Permian Basin’s Bone Spring/Avalon plays, as well as in the Rocky Mountains, including the Niobrara formation of the Denver Julesburg Basin and Colorado’s Greater Wattenberg Field. He also has served as vice president of Anadarko’s corporate planning.

A petroleum engineer by trade, Lawler is a Colorado School of Mines graduate who began his career with Kerr-McGee Corp., which Anadarko acquired in 2006. He also holds a masters degree in business administration from Rice University. He serves on Anadarko’s executive committee and the board, and is relocating from The Woodlands, near Houston, to Oklahoma City. He said he saw “significant value in Chesapeake’s asset base, and the growth potential of the company is tremendous.”

Lawler has an “ideal skill set” to lead Chesapeake, said nonexecutive Chairman Archie Dunham. “Throughout his 25 years in the upstream E&P industry, Doug has earned a reputation as a highly engaged and knowledgeable leader who delivers superior operational performance and capital efficiency. The board is confident that Doug’s deep technical upstream and engineering expertise, as well as his strategic and financial skills, will serve Chesapeake well.”

Since McClendon’s departure, Chesapeake has been run by an Office of the Chairman, which included Dunham, COO and interim CEO Steve Dixon, and CFO Nick Del’Osso. The office will be disbanded once Lawler is aboard, and executives will return to their former roles.

“The company did not miss a beat during this interim period, and their effective collaboration reflects their strong leadership skills and teamwork ethic,” said Dunham. “Steve, Nick, and the rest of the executive group, under Doug’s leadership, will form a highly talented and experienced management team that will lead Chesapeake into its next phase of success and prosperity.”

Anadarko and Chesapeake are competitors in the U.S. onshore, in particular in the Marcellus, Haynesville, Eagle Ford and in the Rockies, and their management teams have worked together frequently to help develop projects. Among other things the operators were founding participants in the industry-led Marcellus Shale Coalition. Until Chesapeake sold its midstream arm, it jointly owned Appalachian Midstream Services LLP, with, among others, Anadarko, to serve Marcellus operators (see Shale Daily, Jan. 3, 2012). Anadarko affiliate Western Gas Partners LP also has done deals with Chesapeake in the Marcellus (see Shale Daily, March 1).

Energy analysts are hopeful that Lawler will bring stability to the cash-strapped, but asset-rich, company. It’s the second largest U.S. gas producer, trailing only ExxonMobil Corp., but Chesapeake carries about $13.5 billion in debt, little changed over the past two years even after pledges by management to reduce it by 25%.

Lawler is not a well-known industry player, according to energy analysts contacted by NGI’s Shale Daily. However, Anadarko’s “good reputation with the Street,” and Lawler’s obvious success in the U.S. onshore during his tenure is a “positive” for Chesapeake, said RBC Capital’s Scott Hanold.

Lawler “is coming into a company that has serious challenges…It’s a minefield that he has to navigate through, but he’s very experienced, and I feel he will live up to the challenge,” said Oppenheimer’s Fadel Gheit.

“We’re hopeful that Doug will improve capital discipline and allocation decisions,” a “core strength” for Anadarko, noted Tudor, Pickering, Holt & Co. “That said, we believe there is a substantial wall to climb given the balance sheet leverage and need to materially sell assets into a weak asset and divestiture market.”

The first read-through on the news “might raise some question marks given Mr. Lawler’s current focus on International and Deepwater (Chesapeake has neither), but Mr. Lawler has a diverse management background, which includes a tour managing Anadarko’s domestic Southern and Appalachia operations (including the Eagle Ford when it first started to ramp as well as the Marcellus),” said Wells Fargo analysts.

“We think the hire should be well received by the market as Mr. Lawler is a well-respected, rising executive from a highly respected U.S. E&P, but also because the hire should begin to turn the page on the Aubrey McClendon saga that has consumed the story for the past year.”

Lawler “is tasked with driving growth for Chesapeake and demonstrating the value of the company’s major asset base,” said the Wells Fargo analysts. “Bottom line is we believe this is a good hire…For Anadarko, the loss of Mr. Lawler is sure to sting, but we believe the company has a very deep bench of executives who are highly capable of stepping in to fill the void.”

Meanwhile, McClendon will be able to participate in Chesapeake’s business operations, despite his departure, because under a contract, he is entitled to participate in all wells the company develops through mid-2014. He also may earn up to 2.5% in the well proceeds. In addition, McClendon has the right to buy property adjacent to Chesapeake holdings, as long as the company is given an option to meet the same terms in any purchase agreement (see Shale Daily, April 23).