Chesapeake Energy Corp., which has faced multiple lawsuits across the country regarding alleged royalty underpayments, now is facing allegations that it cheated landowners in the Eagle Ford Shale of South Texas of more than $9.4 million. 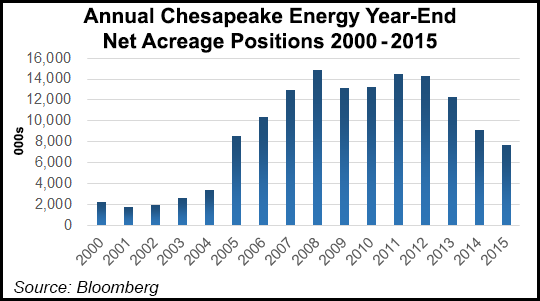 Chesapeake is alleged to have paid “insufficient royalties based on contractual pricing and production volumes and violated specific lease terms prohibiting deductions for production costs,” the lawsuit claims. The company also “failed to deposit the full royalty payments into escrow in the event of a dispute,” which could terminate the leases.

“As oil prices fall, we’ve seen more sensitivity to post-production costs, price selection, volume measurements, and other lease-administration issues,” said plaintiffs’ attorney Daniel Charest of Burns Charest LLP in Dallas. “This case is just one of many that fit the same description. Based on Chesapeake’s conduct, my clients are within their rights to terminate these leases, and they’re prepared to do just that if necessary.”

The court filing indicates that the Oklahoma City-based producer underpaid royalties based on pricing and production volumes. Plaintiffs also claim Chesapeake violated lease terms that prohibited deductions for producing and treating oil and gas to prepare it for sale.

Plaintiffs attorneys argue that Chesapeake did not deposit the full amount of the disputed royalty payments into an escrow account, required in the event a contract dispute. If the contracts were breached, the plaintiffs would be able to terminate the leases with Chesapeake.

Separately, subsidiary Chesapeake Exploration LLC and its joint partners in the Eagle Ford, including units of China’s National Offshore Oil Co. Ltd. (CNOOC), are being sued for breaching contracts that resulted in underpaid royalties on about 30,000 acres.

In all three cases, the plaintiffs claim they leased their land to Chesapeake and partners in exchange for an agreed-upon royalty based on a percentage of oil, minerals and natural gas produced.

The petitions allege that for many years the defendants breached the lease agreements several different ways, including “deducting costs from royalty payments in contravention of the terms of the leases, failing to pay royalties that are no less than fair market value of the crude oil, using improper volumes for their royalty calculations and by deducting third-party costs that were never actually incurred to gather, compress, treat, transport, or sell gas from plaintiffs’ leases…”

The operator, like many of its onshore peers, has faced hundreds of lawsuits from across the country for allegedly underpaying royalties, including one in Pennsylvania (see Shale Daily, Dec. 10, 2015). Many of the lawsuits regard legacy contracts that were assumed by the producers when the leaseholds were sold.

The Texas Supreme Court earlier this year denied a request for a rehearing by Chesapeake regarding a royalty underpayment case in which a Fort Worth, TX family was awarded at least $1 million in royalties, interest and fees for natural gas wells drilled in the Barnett (see Shale Daily, Feb. 3).

Eight producers, including ExxonMobil Corp.’s XTO Energy Inc., Devon Energy Corp., EOG Resources Inc. and U.S. units of BP plc and Royal Dutch Shell plc, filed a joint amicus brief with the Texas Oil & Gas Association in support of Chesapeake and requested the rehearing (see Shale Daily, Sept. 4, 2015). The group argued that the appeals court decision in favor of the family would have negative consequences for the energy industry. Chesapeake attorneys also argued that the courts had disregarded precedent and “inexplicably ignored the law.”