Chesapeake Energy Corp. can see some daylight following the deluge of U.S. natural gas, but it won’t be until the end of the year that the producer is able to report a decline in domestic output, CEO Aubrey McClendon said Friday. 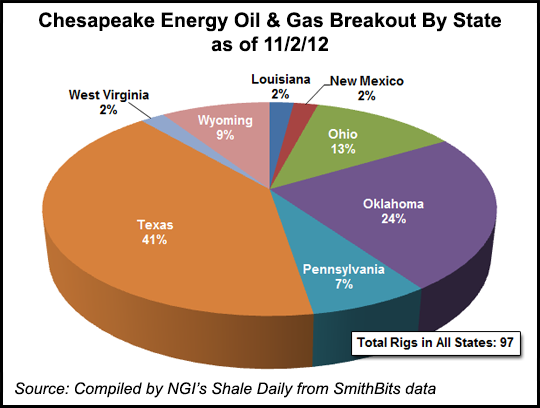 The country’s most prolific driller and the second largest natural gas producer wrote down $2 billion in natural gas reserves in 3Q2012, which wiped out the equivalent of 4.9 Tcf of its reserves and triggered the company’s biggest net loss in three years.

Net losses totaled $2.01 billion (minus $3.19/share) in the latest quarter, versus profits of $922 million ($1.23) a year ago. Excluding the writedown and other one-time items, the Oklahoma City-based producer earned $33 million (10 cents/share), which was 1 cent higher than Wall Street forecasts. The net loss was the company’s largest since the first three months of 2009, when it wrote down the value of some reserves in response to the global financial crisis and weak energy demand.

For the past three years Chesapeake has been shifting to more oily output from its gas-heavy production, but in the latest quarter gas output still jumped 25% from a year ago to 3.81 Bcfe/d. However, the uptick in gas production is going through a historic change. For the first time in 23 years, Chesapeake’s gas production should turn negative in 4Q2012, McClendon told analysts during a conference call.

Once Chesapeake has its gas production moving in reverse, the gas declines will completely upend the market, he said.

“Our view of the market is driven by information that not everybody else has,” McClendon said. “Our view of today’s strip for 2013 and beyond does not reflect the full appreciation of what happens when big producers like us reverse course and go into managed decline” of gas production. “This will be the first time in 23 years that we have experienced a gas production decline.

“Chesapeake is responsible for a lot of the growth” in U.S. gas, and “when we roll over, we think we’ll pull the whole market with us. The prices that we see out in ’13 do not reflect that. I saw one [report] that projected Haynesville [shale] will be flat to up, but that’s simply impossible,” he said of the gassy play. Chesapeake is the biggest producer there. “Our production already is down 25% from its peak, and the Barnett [shale] will be down 11% quarter over quarter in the fourth quarter.

“We don’t see the Marcellus [shale gas] being able to overcome the declines from Haynesville or Barnett, along with all of the conventional gas production, which is about 50% of all in the U.S.”

For now, “Chesapeake today is more of an oil story than a gas story,” said the CEO. Oil today now represents 14% of the company’s total output, up from 9% a year ago. It will take some time, and much higher gas prices, before the company returns to pumping more gas out of the ground.

“Certainly, at $4-5 gas prices, we’ve said ‘no change'” to increasing gas output, said McClendon. “At $5-6, we would evaluate it and take a look.” The Marcellus Shale “is certainly competitive with oil prices in the $5-6 range. The Haynesville and Barnett are still a toss up.” Besides, “we and other companies have oil acreage that still needs to be HBP [held by production].”

Chesapeake’s liquids output continued to show impressive growth in 3Q2012, led by a 96% jump from a year ago and a 21% sequential increase. In 2009 Chesapeake produced 33,000 b/d of liquids. It now is producing more than 140,000 b/d, even after it jettisoned a big chunk of its Permian Basin properties in West Texas (see Shale Daily, Sept. 13).

“We believe the company remains on target to reach our goal of 250,000 b/d net of liquids production in 2015,” McClendon said.

Chesapeake, under the gun to reduce its debt, expects some of its planned 2012 asset sales to slip into early 2013. One issue has to do with the buyers the company originally had targeted to partner in the Mississippian Lime leasehold. The acreage was being marketed to Asian companies, but increased scrutiny by regulators of Asian purchases prompted Chesapeake to reverse course and instead look for industry hook-ups.

“It’s been a long and frustrating process,” McClendon said of a planned Mississippian Lime transaction. “We’re in discussions with a number of companies” but it’s “very likely that actual closing will slip” into 2013. “At this point we’d be able to consider a 100% sale as well” for a portion of the Mississippian Lime.

Chesapeake also is “working hard” to complete its midstream business sale by the end of the year, and it’s selling noncore acreage in the Eagle Ford Shale. “We are trimming to the core of the core, and in “most plays,” the leaseholds will be “all HBP” by the end of next year.

CFO Domenic Dell’Osso said Chesapeake still plans to sell $17-19 billion of assets through 2013. Delays into 2013 for some of its planned 2012 sales should result in a $250 million capital expenditure increase in 4Q2012, he said.

On Thursday Chesapeake said it had received an unsecured five-year, $2 billion term loan to repay some of its debts. The loan would be used to help the company pay off a $4 billion loan agreement it received in May; it still owes about $1.2 billion on that loan (see Shale Daily, May 16).

“The board and management believe current corporate loan market conditions offer attractive refinancing opportunities on favorable terms,” said Chairman Archie Dunham. “By using the proceeds of this loan to repay more costly debt and provide excess liquidity, we will enhance our financial flexibility and ensure our ability to complete our planned asset sales efficiently.”

Chesapeake’s Permian sale brought its total yield in 2012 asset sales to about $11.6 billion, which is 85% of its stated asset sales goal. At the end of September Chesapeake’s long-term debt stood at $15.75 billion.

“We continue to believe that Chesapeake’s portfolio of assets and dedicated employees are second to none, and we have confidence in the company’s ability to achieve its stated financial and operational goals,” Dunham said. “The board and management remain committed to reducing debt levels to $9.5 billion or below as we execute on a more focused drilling program on our existing assets.”