Oklahoma City-based Chesapeake Energy Corp. is going back to the future, agreeing Wednesday to pay $2.2 billion for one of the Haynesville Shale’s biggest natural gas producers, Vine Energy Inc. 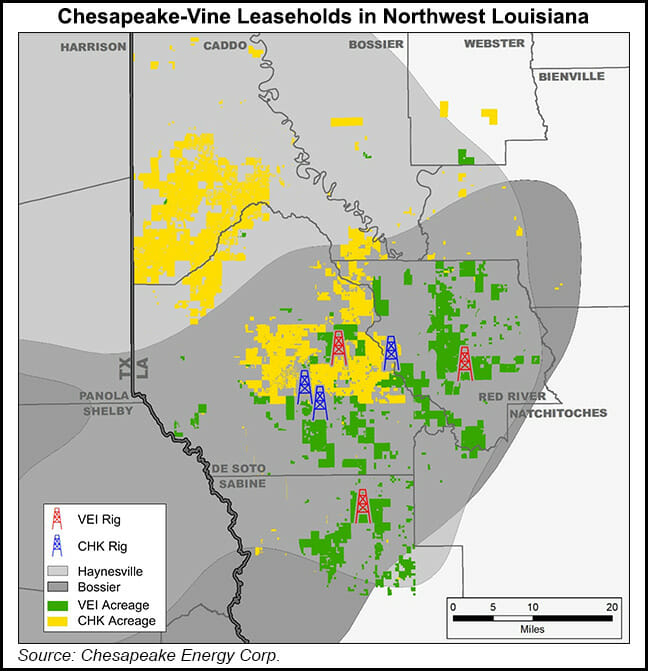 The announcement hearkened to the past, when Chesapeake took advantage of low natural gas prices in the mid-2000s to build the biggest Lower 48 portfolio in the country. Chesapeake was one of the first companies to actively develop the Haynesville as the unconventional revolution took off.

“This transaction strengthens Chesapeake’s competitive position, meaningfully increasing our free cash flow outlook and deepening our inventory of premium gas locations, while preserving the strength of our balance sheet,” interim CEO Mike Wichterich said. “By consolidating the Haynesville, Chesapeake has the scale and operating expertise to quickly become the dominant supplier of responsibly sourced gas to premium markets in the Gulf Coast and abroad.”

Past And Future King

Once the deal is completed, Chesapeake expects to once again be the largest natural gas producer in the Haynesville, a title it held years ago. Output should nearly triple to around 1.581 Bcf/d.

Chesapeake’s Haynesville portfolio produced around 531 MMcf/d in 2Q2021. Vine, which went public earlier this year, produced 945 MMcf/d in 1Q2021, versus 859 MMcf/d in 1Q2020. Vine had not yet issued its second quarter results, initially scheduled to be issued on Monday (Aug. 16).

Vine’s leasehold encompasses around 227,000 net acres in the gassy Haynesville and Mid-Bossier plays of Northwest Louisiana. The combination would give Chesapeake around 348,000 net acres total.

The acquisition is considered a “zero premium transaction” based on a 30-day average exchange ratio as of Tuesday’s market close. For each share, Vine stockholders would receive 0.2486 shares of Chesapeake common stock plus $1.20/share cash. The deal equates to around $15/share, comprising 92% stock and 8% cash. Chesapeake shareholders would own 86% of the company, with Vine owning around 14%.

The transaction, approved by each board, is expected to be completed by year’s end. Funds managed by The Blackstone Group Inc., which owns 70% of Vine’s outstanding common shares, have voted in favor of the transaction. The group is becoming a Chesapeake shareholder.

Vine CEO Eric Marsh, who has run the company since it was founded seven years ago, is credited with explaining the company’s purpose. “We do one thing and we do it well,” he has said. The “quality of our assets, combined with the scale, depth and diversity of Chesapeake’s portfolio…provides significant opportunity to accelerate the return of capital to our combined shareholders.”

Wichterich during the conference call to discuss the tie-up credited Marsh and his team with building a blockbuster company. “Eric Marsh and his team have done a beautiful job,” he said. Chesapeake had followed the company’s progress and was “impressed.” He also thanked Blackstone and welcomed it as a shareholder. “It’s great to have sophisticated investors who want to be in your stock.”

During a conference call in May to discuss Vine’s first quarter performance, Marsh said the company was looking to become a player in the liquefied natural gas (LNG) export market.

Vine’s leasehold in proximity to the Gulf Coast, “stands out for a reason many may not appreciate,” Marsh said at the time. “We are witnessing the advent of the balanced-scorecard approach to sourcing LNG and environmental factors are prominent components.”

That plays into a strategy by Vine and by Chesapeake to produce responsibly sourced gas, or RSG.

By year’s end, Chesapeake expects 100% of the combined production to be RSG-certified. That moniker would give Chesapeake claim as the “dominant supplier of RSG to the Gulf Coast and LNG export markets,” management said.

Vine today has no firm transport in its current portfolio, according to Chesapeake. Among other projects, Williams has a Louisiana pipeline venture underway, as does Tellurian Inc., to move supply from the gassy producing areas of Louisiana to the Gulf Coast.

With most of Vine’s firm sales set to expire within three years, Chesapake could “capitalize on competitive downstream pipeline and LNG markets,” management said.

With the merger, Chesapeake also expects to recoup around $50 million in average annual savings from operating and capital synergies. Overall, the Vine deal would give it a total of close to 370 drilling locations. Combined, 99% of the output would be held by production, with average working interest of 83%. Chesapeake’s gross drilling locations would expand to 1,500 from 900.

Chesapeake, which issued its second quarter results in conjunction with the Vine news, plans to raise its base dividend by 27% to $1.75/share when the merger is completed. Free cash flow (FCF) is expected to increase in part because of Vine to $6 billion over the next five years.

The company also has established a variable return program to deliver 50% of a previous quarter’s FCF to investors in cash, payable the following quarter. The program is scheduled to begin with results from 4Q2021.

‘Picks Up The Pace’

“We were confident 2021 would be a big year for Haynesville consolidation,” Wood Mackenzie analysts said. “This deal really picks up the pace,” following the news in early June that Southwestern Energy Co. would buy Haynesville producer Indigo Natural Resources LLC.

“We were anticipating that Chesapeake would become a little more aggressive with new leadership and refreshed financials,” the Wood Mackenzie analysts noted. “And moves toward RSG certification showed an updated, forward-looking strategy. Given those factors, we’re not surprised to see the company doubling down on one of its best assets” through a merger. The LNG angle also is intriguing, they said.

“Adding Vine brings Chesapeake full circle in the Haynesville,” the analysts noted. Once a Lower 48 powerhouse, Chesapeake sold off a big chunk of its portfolio, including the extensive Arkansas-Louisiana-Texas leaseholds, in multiple transactions around five years ago.

The Vine combination also “adds Chesapeake to the list of companies taking a ‘basin dominance’ growth strategy,” according to Wood Mackenzie’s team.

Basin-dominant operators now include EQT Corp., the biggest gas producer in the country and the boss of the Appalachian Basin. Pioneer Natural Resources Co., meanwhile, has become the leading Permian Basin exploration and production (E&P) company through its recent strategic takeovers.

Enverus senior mergers and acquisitions analyst Andrew Dittmar also weighed in on the tie-up, noting it’s the first big deal by Chesapeake since its emergence from Chapter 11 reorganization.

“Given its high focus on gas with nearly 90% of capital spending slated for the Haynesville and Appalachia, it makes sense that the company would look to one of those two basins for an acquisition,” Dittmar said. “With a mix of public and private acquisition opportunities, strong well results and higher confidence around future pricing for production given its geographic location close to Gulf Coast gas markets and adequate infrastructure, it is easy to see why Chesapeake ultimately chose the Haynesville for expansion.”

The merger also is “a return to 2020’s model that investors seemed mostly to applaud,” he noted. “The deal is a zero-premium merger between two public companies that operate in the same basin, bringing economies of scale and operational efficiencies to the table…

“Private sellers have sometimes sought, and received, higher valuations on their assets relative to public company deals struck at the market price of the stock and have received a more mixed reaction from the buyer’s shareholders.”

Investors also are pushing for consolidation in the sector, with the “size threshold for maintaining interest seemingly, continually moving upward…” Investors, he said, “are not interested in growing the ranks of publicly traded E&Ps and want fewer and larger companies in the shale plays. This deal moves the industry one step closer to that goal.”

Wood Mackenzie analysts said the transaction is the “kind of deal investors can support with confidence. The cost savings are more clearly understood.”

The details are somewhat similar to the 2018 combination between Permian players Concho Resources Inc. and RSP Permian Inc. The merger created a mega E&P with 640,000 net acres of running room.

“An all-stock transaction…elevates the benchmark for basin consolidation,” the Wood Mackenzie analysts said. “After Concho/RSP, other big deals followed as competitors didn’t want to be left behind.”

Now there are questions for other gassy competitors in the Haynesville, said the Wood Mackenzie analysts, including for Comstock Resources Inc. and Tellurian. “What will Comstock and Tellurian do?”