Impairments to the value of its natural gas-heavy properties led to the sixth straight quarterly loss for Chesapeake Energy Corp. in the second quarter, but operations-wise, the super independent was running at full bore, highlighting a “transformation” in how it completes wells. 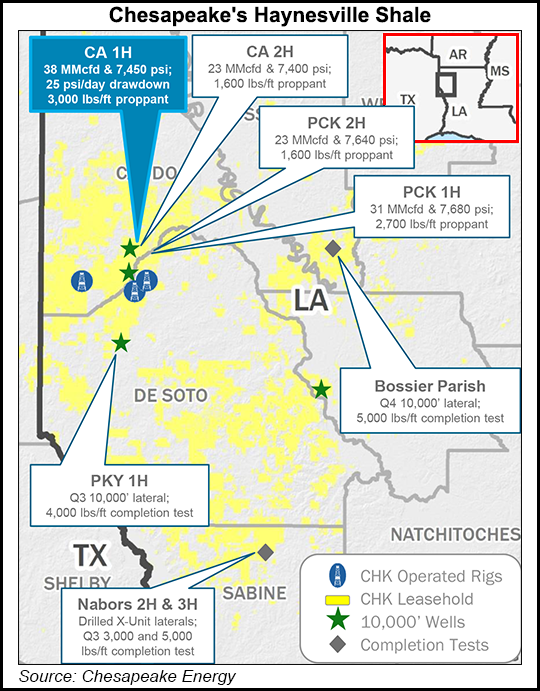 CEO Doug Lawler and other executives discussed the quarterly results during a conference call Thursday. Lawler attempted to keep the subject on operations, while acknowledging that the cash-strapped company still has a way to go before investors are convinced.

The Oklahoma City-based producer still faces a “challenging commodity price environment, but I think it’s important to note the significant progress that Chesapeake Energy has made despite commodity prices.

“In the past three years, we reduced our total leverage by approximately 50%. We reduced our cash cost by roughly 50% and significantly improved our capital efficiency.”

Based on efficiencies captured to date, plans are to drill 100-plus more wells this year and place 75 additional wells on production. Capital expenditures remain set at $1.3-1.8 billion.

Capital spending this year is only about 10% of the total spent in 2012, while production remains almost the same level. Lawler came aboard in 2013 and has since whittled the portfolio, selling off properties to focus on quality over quantity.

“We have three major gas assets,” he said, pointing to the Haynesville, Eagle Ford and Marcellus shales, “each with a significant well inventory of new drilling opportunities that can produce in excess of 30 MMcf/d per well.”

Nowhere is the drilling talent more evident than in the Haynesville, where Chesapeake has more than 430,000 net acres. Six 10,000-foot laterals have been drilled to date in the North Louisiana/East Texas formation. The largest completion in history was recently tested using more than 30 million pounds of sand pumped in a well.

“The results have been very impressive, with the restricted initial rate of 38 MMcf/d and a flowing pressure of approximately 7,500 psi,” Lawler said. “We call this new era in completion technology, ”proppant-geddon.’

“We’ve not yet reached the point of diminishing returns in the Haynesville, and we plan additional tests up to 50 million pounds in the back half of the year.”

In July, Chesapeake placed the CA 12&13-15-15 1H horizontal well in Caddo Parish, LA on production. The 10,000-foot lateral well reached a maximum production rate of 38.0 MMcf/d with a flowing tubing pressure of 7,400 psi. Estimated ultimate recovery is 22-24 Bcf with an estimated completed well cost of $9.8 million.

A second Louisiana well in DeSoto Parish, the PCK 1H, reached a maximum production rate of 31.0 MMcf/d with a flowing pressure of 7,600 psi using similar completion techniques for an estimated well cost of $8.4 million.

The completion techniques being used in the Haynesville, “along with access to Gulf Coast pricing, could increase field-wide productivity by opening up new areas in the field that were previously economically challenged,” Lawler said.

Currently, the rig count is 10 across the operations, three each in the Eagle Ford, Haynesville and Midcontinent, with one rig in the Utica Shale. That 10-rig program is set for the rest of the year, said the CEO.

So good are Haynesville results that Chesapeake is culling some of the noncore acreage and adding elsewhere. In July it acquired 70,000 net acres in the Haynesville for $87 million, acreage primarily within existing operations, which increased average working interest to 83%. The purchase also added 60 MMcf/d net.

“One of the challenges that we’ve got is all the teams are doing very similar things, and they’re fighting each other every day for every dollar, in a good way,” operations chief Jason Pigott said of the Haynesville.

Similar to the Haynesville, an optimized drilling schedule in the Eagle Ford Shale led engineers to take a second look — and keep the three rigs running that were scheduled to be dropped this summer. It was a no-brainer, Lawler said.

“Total well cost for wells completed in the second quarter averaged just under $4 million, where drill times reduced to 9.7 days — even though we are drilling wells with longer laterals.”
Moving to longer laterals across the portfolio is expected to accelerate value, as each rig is “developing up to twice the rock volume from a year ago,” said Lawler.

Meanwhile, since June 2015, total debt has fallen by more than $3 billion, with $1 billion slashed since the start of this year. Four volumetric production payment (VPP) contracts also were repurchased, leaving the company with only two of the nine it had in 2013.

VPPs, a favorite method to raise cash by some exploration companies, allow a producer to sell a percentage of not-yet-produced volumes in exchange for upfront cash payments. The buyers then are made whole as the volumes are sold. Analysts long have complained that Chesapeake’s VPPs made financials more opaque than they should be.

Reducing debt remains paramount, particularly debt that matures in the next six to 24 months, CFO Nick Dell’Osso said. “Opportunities to enter the market are improving.”

In April the company reaffirmed its $4 billion borrowing base and in return, pledged additional properties. The improvements in costs, as well as leverage to natural gas prices, also has yielded an uplift to the value of reserves.

“We have ample reserves back in our liquidity position of approximately $3.1 billion at June 30,” Dell’Osso said. “With this liquidity, we are well positioned to fully retire or refinance our pending 2017 debt maturities.”

Management also is “actively working with Williams and all of our midstream and downstream service providers on win-win solutions in the current pricing environment,” Lawler said. “We are encouraged by the progress we have made today, and we believe we will be able to announce additional, meaningful improvements in the near future.”

Initially for 2017, oil production is forecast to be relatively flat year/year, with total volumes down 5%, in part on asset sales.

Chesapeake expects to sell more than $2.0 billion in assets this year, sharply higher than earlier guidance of $1.2-1.7 billion. Included are plans to market about 150,000 net acres in the Haynesville, land now producing around 95 MMcf/d.

Average production expenses were $3.05/boe, while general/administrative expenses totaled $1.02. Combined, boe costs were 25% lower than a year ago and 2% off from 1Q2016.

During this period of reduced activity, an “in-depth study of the resource position and potential of each one of our operating areas” has been ongoing, said the CEO. More information about the consequences of the study will be forthcoming.