Chesapeake Energy Corp. plans to direct 85% of its capital spending in 2022 to the “highest return opportunities” in the Eagle Ford, Haynesville and Marcellus shales, as it bears down on sharply reducing methane intensity across the board. 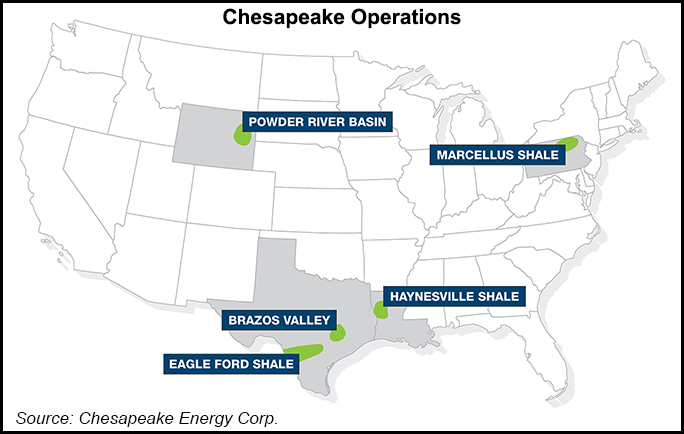 With the takeover of gassy Haynesville powerhouse Vine Energy Inc. complete, Chesapeake is now ready to increase production responsibly, with a goal to reach net-zero emissions by 2035, Dell’Osso said.

How Will RSG Goal Be Achieved?

Chesapeake, 80% weighted to natural gas, is taking notice, said the CEO. After starting pilot RSG programs earlier this year in the Haynesville and Marcellus, the goal is to have 100% of the Lower 48 dry gas production certified as RSG by mid-2022.

“We remain on track to fully support 100% of our Gulf Coast production as responsibly sourced gas this year and Appalachia production by the middle of 2022,” Dell’Osso said. “The gas produced from the two basins is forecast to have methane intensity of 0.02-0.03%…

“Once complete, Chesapeake will be positioned to directly deliver approximately 3 Bcf/d of certified responsibly sourced gas to end users around the globe.”

Dell’Osso said it was “important to reiterate the central role we believe Chesapeake will play in supporting a lower-carbon future while continuing to deliver reliable affordable energy. We believe responsible production from unconventional resources in the U.S. has a critical role to play in helping meet these goals, and we’re proud to produce the energy that is so desperately needed across the world today.”

Chesapeake ended 2020 “with an enterprise-wide reported methane intensity of 0.13%,” he noted. “With our recent abatement efforts, coupled with our Vine acquisition, we’re rapidly accelerating our path to reaching our 2025 methane intensity target of 0.09%.”

Still, there’s more to be done to advance the broad ESG initiatives.

“We plan to invest over $30 million in ESG-related and emissions-reducing programs by year-end 2022,” said the CEO. “As part of this effort, the company anticipates retrofitting more than 19,000 pneumatic devices, primarily focused on our oil assets.”
The retrofit program began during the third quarter, initially focused in the Brazos Valley business unit. The program has since been expanded to the other oily plays.

“Once complete the effort is expected to reduce Chesapeake’s GHG and methane emissions by approximately 40% and 80%, respectively,” Dell’Osso said.

Chesapeake continued to see lower base production decline rates during 3Q2021, which helped achieve an average net output of 436,000 boe/d. Eleven rigs now are in operation, with three in Appalachia, six in the Gulf Coast (i.e., Haynesville Shale) operations, one in the Eagle Ford Shale and one in the Powder River Basin (PRB).

Nearly 85% of next year’s capital expenditures (capex) are to target the Eagle Ford, Haynesville and Marcellus shales.

“The Marcellus is constrained, and so we will stay with three rigs there,” Dell’Osso  said. “The Haynesville is performing extremely well, and we will have a pretty significant increase in Chesapeake activity,” given the integration with Vine. Up to two more rigs would focus on Eagle Ford activity in South Texas.

The remainder of the 2022 capex “will be focused on further portfolio delineation,” which includes  expanding activity in the Austin Chalk formation on the Gulf Coast and testing wider well spacing in the Brazos Valley and PRB.

“All continuous methane emissions monitoring devices have been placed in the field” in Chesapeake’s legacy Haynesville assets in Louisiana. Efforts also are underway to “install these or similar devices” in the newly acquired Vine acreage under Project Canary’s TrustWell certification process.

In the Marcellus, Chesapeake expects to complete installing methane monitoring devices by year’s end, with certification by the end of next June.

Chesapeake noted that its commitment to its ESG program extends to compensation, where “the program directly limits payout, regardless of performance in other areas, should the company fail to meet critical environmental and safety metrics, including GHG intensity factors.”

Meanwhile, Chesapeake emerged from Chapter 11 restructuring in February. The third quarter compared successor financials for 3Q2021 with the predecessor results in 3Q2020.

During the quarter, Chesapeake generated $443 million of operating cash flow and ended the quarter with $849 million of cash on hand.

The board has increased the base quarterly dividend by 27% to 43.75 cents/share. Additionally, Chesapeake has adopted a variable return program for an additional dividend, payable beginning in March.