Chesapeake Energy Corp. unveiled a new unconventional resource within Oklahoma’s stacked reservoirs and offered up a renewed zeal to step up in the Powder River Basin, two “game-changers” that are expected to lift oil volumes within the natural gas-heavy portfolio. 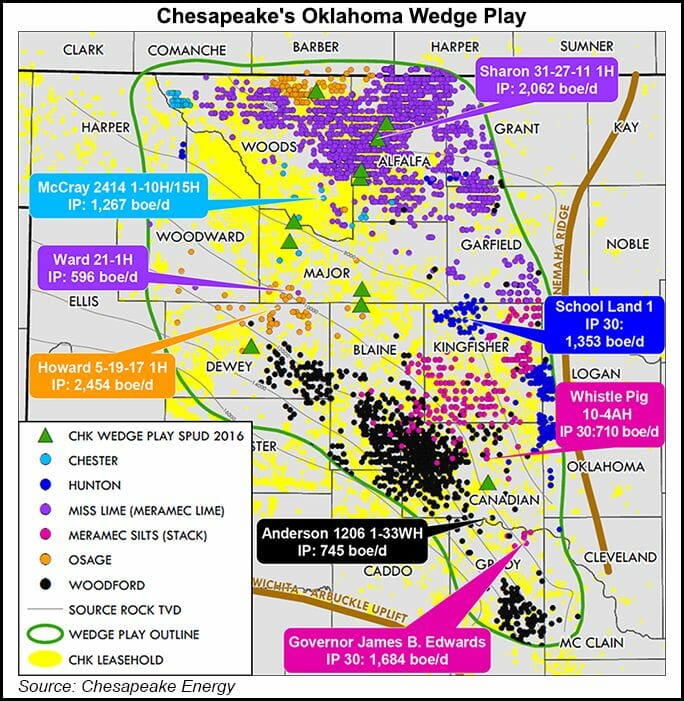 In its first investor conference in two years, Chesapeake’s management team did a deep dive about where the company has been and where it wants to go in the U.S. onshore, outlining myriad opportunities that could result in as many as 11 new basin entry plays and 15 growth opportunities.

“This is not the same Chesapeake today,” CEO Doug Lawler said in kicking off the half-day meeting. “During the past two years, we’ve gone through a lot of challenging times financially. We’ve made significant improvements in our operations. We’ve retrenched and gone back and looked at how do we best drive greater value from our assets? How do we drive greater value for future earnings for our shareholders?”

The goal, he said, is to help investors “rediscover” the onshore operator, which, despite being beaten down by low prices, heavy debt and reckless spending years ago, continues to be the second-largest natural gas producer in the country.

The management team highlighted the plays in minute detail, both operationally and financially. With asset sales ongoing, production isn’t going to be growing too much through 2017. This year, output is expected to be flat to 3% higher from 2015, and down 5% to flat in 2017 with asset sales. Meanwhile, capital spending is expected to increase to $1.6-2.4 billion in 2017 from $1.4-1.5 billion this year.

The spending is to grow the oil portfolio, which now comprises around 25%, explained Lawler. Two big oil opportunities have been in the portfolio all along, within the Powder River Basin and Oklahoma’s stacked reservoirs, said Frank Patterson, executive vice president of Chesapeake.

Two two plays are the “big game-changers that could happen with this big drilling program,” he said. The Wedge, an outcrop of the Oswego formation and Mississippian Lime, could become Chesapeake’s biggest drilling target in the Midcontinent.

“The other one really is the Powder, and the Powder could be accelerated,” Patterson said. “And if you accelerate that by a couple of years, you are looking at an Eagle Ford-type of asset in three or four years.”

The Wedge is a geologically defined area in northwestern Oklahoma comprised of six oil-rich stacked reservoirs that the industry now is developing, the Hunton, Woodford, Osage, Meramec Lime, Meramec Silt and Chester. The Wedge within reservoirs that run beneath Oklahoma’s Woods, Major, Blaine, Kingfisher and Canadian counties.

The Midcontinent overall is “potentially a very prolific area for us, and I think it will evolve in the next six months to two years as something that we’re going to look back and say, ‘wow, that’s a really cool play. And it was really good we had that acreage on top of it,'” Patterson said.

The Oswego formation extends from the Wedge, as does the Mississippian Lime, where Chesapeake now drills. “If the price of oil goes to a higher level, then we can go to the high graded areas, but then the Wedge play basically takes over and dominates in the outer years,” Patterson said. “How many rigs are we going to run? As this thing evolves, we’ll figure out how many rigs we need to run. Right now we’re saying three to four, two in the Oswego, probably two in the Miss Lime/Wedge play combo…It’s very, very attractive economics.”

Chesapeake estimates it has 500 initial Wedge drilling locations across its estimated 870,000 net acre position, 94% held by production. The play’s initial wells are estimated to provide a 50% rate of return at a $50/bbl oil price. One step-out well, drilled with a one-mile lateral, produced 1,073 boe/d, equally weighted to oil and gas.

The Powder River Basin leasehold was at the bottom the opportunity stack not that long ago. Chesapeake actually pulled out all of its rigs about a year ago and put the leasehold up for sale. However, the development team went back and looked again at the entire basin.

“They worked back through from basically granite to surface,” Patterson said. “We went in and looked at our drilling and completion practices and found that we really weren’t very efficient or very good at what we were doing. We were getting better at the end, but we didn’t do as good a job as we could. Now we have all this technology, all these drilling practices, all these completion practices that are going to change the game.”

“Now we have all this technology, all these drilling practices, all these completion practices that are going to change the game.” It also incorporated offset operator information, providing more clarity about what was possible.

Another key to moving back was in renegotiating the gas transportation contract with Williams Partners LP and Crestwood Equity Partners LP, which jointly own the Bucking Horse natural gas processing plant and Jackalope Gas Gathering System.

Under the revamped Powder River contract, the parties agreed to replace the current cost-of-service arrangement and improve economics to support Chesapeake’s development ramp-up. The restructured terms, effective Jan. 1 for 20 years, would include minimum annual revenue guarantees that support a transition to a fixed-fee structure over the next five to seven years. Bucking Horse is able to process up to 120 MMcf/d, while Jackalope’s gathering system includes 184 miles of low-pressure gathering pipelines.

“All these things coupled together create a very powerful story,” he said. “Today, we see 2.7 billion boe of recoverable reserves” in one vertical mile of opportunity (5,200 feet) that includes eight stacked formations.

“We think this is the next growth asset for the company. It actually could be equivalent to the Eagle Ford in a very short period of time.”