Chesapeake Energy Corp. is eliminating its dividend and selling some onshore properties to cope with the continuing slump in natural gas and oil prices. 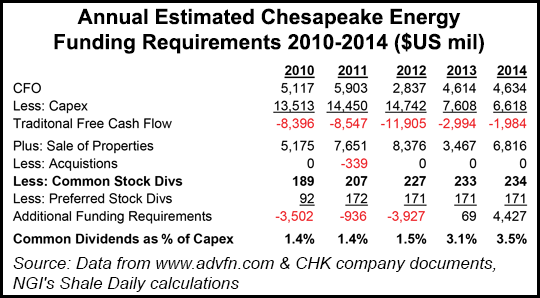 The dividend would be redirected to 2016 capital spending, allowing the independent to keep its exploration and production (E&P) activities ongoing, said CEO Doug Lawler. “Substantially all” of the assets held by affiliate CHK Cleveland Tonkawa LLC in Oklahoma also are being sold.

The dividend, which pays about 35 cents/share, is to be eliminated effective 3Q2015. It costs Chesapeake about $240 million annually, Lawler said.

“We believe this decision is prudent as we continue to invest and redirect as much capital as possible into our world-class assets,” Lawler said. “This, along with the redemption of the preferred shares in our CHK Cleveland Tonkawa subsidiary, is part of a broader disciplined approach that began two years ago to decrease the company’s financial complexity and increase our liquidity.”

The E&P’s liquidity position “remains extremely strong,” Lawler said, “with more than $2 billion of unrestricted cash on our balance sheet and an undrawn $4 billion revolving credit facility” at the end of June. “We continue to move forward with multiple opportunities that will strengthen our cash flow generation capabilities, and I look forward to future announcements regarding the ways we are creating additional value in the months ahead.”

The CHK Cleveland Tonkawa assets are being sold to FourPoint Energy LLC. Once the transaction is completed, Chesapeake would be able to eliminate about $75 million in annual preferred dividend payments, a 3.75% overriding royalty interest payments associated with the properties and all related future drilling and override conveyance commitments.

FourPoint also agreed to buy from Chesapeake some adjacent properties in Oklahoma’s Roger Mills and Ellis counties for $90 million. Net production in the two counties was 15,000 boe/d during 2Q2015.

“Very few, if any, investors we speak with own Chesapeake for its 35 cent/share annual dividend (3.4% yield), so we expect any negative trading momentum to be offset by improvement to the balance sheet liquidity,” analysts said. “Given the move in commodity prices, we believe investors will continue to favor capital discipline.”

Sterne Agee CRT analyst Tim Rezvan said cutting the dividend was a surprising move, but he also called it a “prudent move to enhance liquidity at a time when Chesapeake’s liquidity is among the most heavily debated topics in E&P land.”

Rezvan calculated that eliminating the dividend could improve Chesapeake’s liquidity by $540 million by the end of 2016 — without impacting earnings or cash flow.

“Clearly, management believes that preservation of cash is more important than appeasing a beaten-down shareholder base’s desire for dividend income,” he wrote. “We are supportive of this view. We believe that shaking out the shorts by refuting the pervasive ‘liquidity drain’ thesis is the best option to support Chesapeake shares in a weak natural gas price environment.”

Analyst Jason Wangler of Wunderlich Securities Inc. also said the move made sense because Chesapeake “had a relatively low yield versus other sectors” and was a “relative anomaly” in the exploration and production sector, which usually doesn’t pay dividends.

“Obviously, pulling a dividend doesn’t feel good but with a yield that was generally very nominal and in the current environment of only 3-4%, we believe it was immaterial versus the overall plans,” Wangler wrote. “While obviously a tough decision, we also understand the move.”

The decision “can be considered bullish or bearish depending on which side one resides,” he said, but “it is certainly another example of the company’s focus on cutting costs in the rough environment to conserve cash, improve the balance sheet and focus on the long-term plans.” Selling the CHK Cleveland Tonkawa assets “should pull over $1 billion in noncontrolling interest liabilities, while also saving $75 million in dividend payments annually.”

Chesapeake has spent about $2 billion on its capital program since the start of the year, Wangler estimated. However, with the announcements Tuesday, overall oilfield service pricing reductions and a lower rig count through the end of 2015, “we should see a much lower cash burn as the company approaches neutrality, even in a bad commodity price environment.”

Also weighing in were Wells Fargo analysts. The decision to eliminate the dividend “makes sense,” but they still expect the shares to come under pressure.

“Management had indicated actions would be forthcoming, and there had been some chatter over elimination of the dividend.” Tuesday’s news, which sent the stock price down sharply by more than 4% before midday, was “likely priced in considering the recent movement in shares, but we get the feeling that most were expecting some form of midstream resolution before the dividend could hit the chopping block…

“Investors have been watching for equity, which Chesapeake has indicated is not on the table. Eliminating the dividend and other actions may push back the need for such an offering, but ultimately, Chesapeake still likely needs help from commodity prices to change its narrative.”

Chesapeake’s decision to eliminate its dividend will help its financing needs, but only to a limited extent. The $234 million the company paid to shareholders in 2014 represented just 3.5% of its total capital expenditure spend for the year. However, the move should be construed as positive for a few reasons, noted Patrick Rau, NGI’s Director of Strategy & Research, and a former sell-side equity research analyst.

“The company can earn much higher rates of return for its shareholders by drilling wells in its best formations, or it could use the money it is saving from the dividend to help pay down debt,” Rau said. “It doesn’t typically make much sense for a company with a sub-investment grade rating to pay a dividend.

“Not to mention, shareholders of Chesapeake aren’t likely holding shares of a highly volatile exploration & production company such as Chesapeake for yield, anyway.”