Chesapeake Energy Corp. on Wednesday strengthened its commitment to boost natural gas output, announcing an acquisition to bolt on acreage in the Haynesville Shale and laying out early plans to focus heavily on the play and other gas-rich assets in the Appalachian Basin next year. 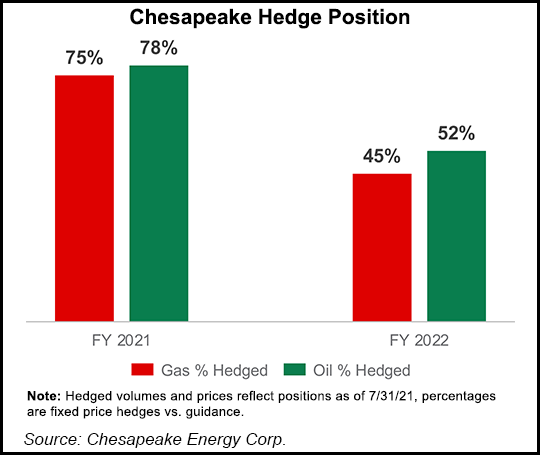 While oil production is expected to remain flat year/year, natural gas is seen jumping from 775 Bcf to 1.1 Tcf, at the high end of guidance.

Pending the takeover, Chesapeake expects to operate 10-12 rigs in 2022, with up to nine working the natural gas portfolio and up to three working on its oil assets. The company is currently operating seven rigs, including three each in the Marcellus and Haynesville shales and another in the Eagle Ford Shale of South Texas.

Chesapeake, once the nation’s largest natural gas producer, emerged from bankruptcy earlier this year. It’s gotten back to its roots with a strong focus on strengthening its natural gas portfolio since then. In the years leading up to its bankruptcy, the company had focused more heavily on oil.

Chesapeake also sees the Vine acquisition as a way to build a broader portfolio of “responsibly sourced” natural gas (RSG), or production volumes certified as environmentally friendly by a third party. Vine announced a program with Project Canary earlier this month to certify all of its Haynesville production. Chesapeake launched a similar program for some of its volumes in the Marcellus and Haynesville earlier this year.

“The position that it gives us around marketing of gas and proximity to liquefied natural gas, and the fact that we’re going to have such a large aggregation of RSG in the market this close to the Gulf Coast in the industrial and export market is — we think — a competitive advantage,” said CFO Domenic Dell’Osso, Jr. during a call on Wednesday to discuss the transaction and second quarter results.

Chesapeake produced 433,000 boe/d in the second quarter, of which 77% was natural gas and 23% was liquids. The company did not release comparable results for the same period last year when it was in bankruptcy.

While Chesapeake is to focus less on its oil assets going forward, most of next year’s oil activity will be centered in the Eagle Ford. Interim CEO Michael Wichterich said there would be some limited activity in the Upper Eagle Ford of East Texas and the Powder River Basin in Wyoming, where exploratory efforts haven’t panned out in recent years.

“The PRB is a little bit of the tail wagging the dog,” he said. “We are drilling some obligation wells there this year. It has to start competing. If it doesn’t compete, it won’t stay around very long.”

Wichterich, who also serves as chairman, said the search for a CEO to replace Doug Lawler, who left earlier this year, is ongoing. It wasn’t clear what role Vine executives might play after the acquisition, but Wichterich stressed that the deal was not related to filling the void left by Lawler’s departure.

“We weren’t trying to buy a CEO with this transaction,” he said. “It’s absolutely not what’s happening here. We wanted to buy the company and its assets.”

Chesapeake reported a second quarter net loss of $439 million (minus $4.48/share). Revenue for the quarter was $693 million. The period’s results included a $740 million loss on oil and gas derivatives.

Chesapeake has used fresh start accounting since its emergence from bankruptcy, meaning its financial statements are not comparable with those prior to the filing.