Chesapeake Energy Corp. has carved out a 94,000-acre tract in Ohio’s Stark and Portage counties to sell, land that represents roughly one-tenth of its leasehold in the Utica/Point Pleasant Shale. 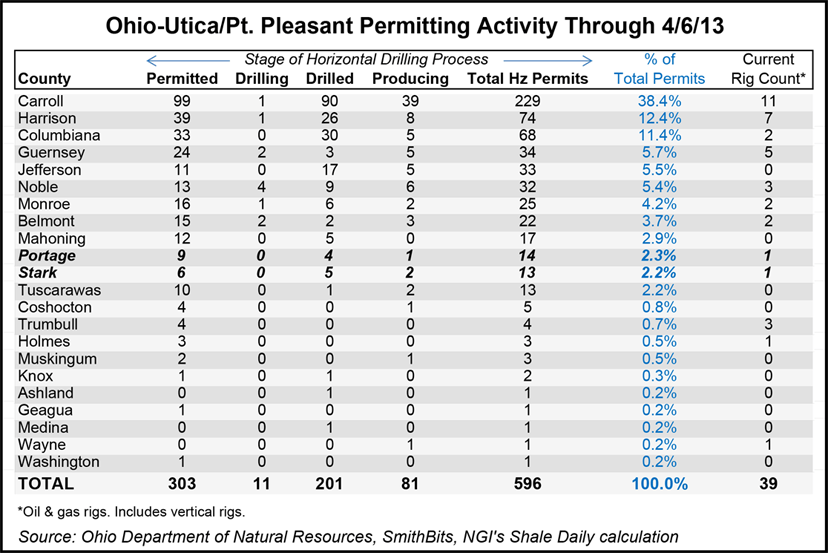 The acreage being marketed is mostly in Stark County, except for Osnaburg, Paris, Sandy and Washington townships, according to Meagher Energy Advisors. Land also is for sale in seven southern Portage County townships.

Two operated wells are included in the sale, as well as another well in which Chesapeake holds a financial stake, the listing indicated. According to the Ohio Department of Natural Resources, Chesapeake as of March 30 had one operated producing well, two drilled wells and two well permits in the acreage up for sale.

Chesapeake has concentrated its Utica exploration and development activities in Ohio’s Carroll, Columbiana and Harrison counties. Last year, under pressure from shareholders, Chesapeake put up for sale 337,481 net acres in the unconventional acreage, which cut its holdings from 1.3 million acres (see Shale Daily, June 5, 2012). The acreage was limited to the Cincinnati, Utica, Point Pleasant and Trenton intervals, and about 270,500 net acres were held by production in shallower zones in Queenston and Clinton counties or held by storage.

The new acreage package, said a spokesman, “can be more valuable to someone else than to us regarding where we’re putting our rigs.”

Chesapeake began a fire sale of its properties last year to help repair its balance sheet; it plans to sell $4-7 billion in assets this year, acting CEO Steve Dixon said early this month (see Shale Daily, April 2). To date this year, Chesapeake has announced $1.5 billion in asset sales. It also continues to search for a permanent CEO.

Chesapeake has drilled more than 240 wells in the Utica, “75% of the wells drilled in the play thus far,” Dixon explained during the conference call. The only problems are related to infrastructure constraints. “We’ve turned to sales only 54 wells, but we have substantial completions planned this year.”

It’s not a lack of gathering lines or compression, but there just isn’t enough gas processing capacity available, said Dixon. More capacity is expected to be ramped up by midyear, which would allow Chesapeake to produce a projected 55,000 boe/d by the end of the year.

“The timely startup of critical infrastructure is key,” he said.