Oklahoma City-based Chesapeake Energy Corp. expects to up the natural gas mix in its production portfolio to 85% in 2022 from 77%, executives said Wednesday in the first quarter earnings call. 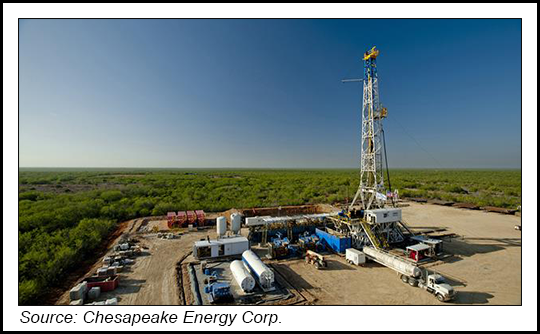 At one time the largest natural gas producer and biggest leaseholder in the Lower 48, Chesapeake succumbed to bankruptcy last June. In February it completed a restructuring process, erasing an estimated $7.8 billion in debt.

Referring to the bankruptcy, Wichterich said executives were “tired of getting punched in the face in the way of the balance sheet, and they would like to get away from that cloud and move on to execution. Now talk is cheap, we get that. We have to have great results. And I think the first quarter is a good start in that direction.”

Chesapeake achieved production of 436,000 boe/d in the first quarter. The company is operating seven rigs across its portfolio, with three rigs in Appalachia, three rigs in the Haynesville Shale and one rig in South Texas.

The company generated $409 million of operating cash flow and ended the quarter with $340 million of cash on hand. The company also declared an annual dividend on common shares of $1.375/share. The dividend is to be paid quarterly, with the first payment to be payable on June 10, 2021.

Wichterich highlighted cost per lateral foot efficiencies. In Appalachia, “we’re pretty proud to get $700-750 a foot; in 2019 it was $985 a foot. Now during bankruptcy, this says the team continues to execute.”

In the Haynesville, “we are seeing really good base production support in all the fields,” according to Executive Vice President Frank Patterson.

Executives said the search for a new CEO would not rule out any potential sales or purchases as consolidation continues in the industry.

The company reported net income of $295 million ($3.01/share)  in the first quarter. Because of its emergence from bankruptcy, Chesapeake is using fresh start accounting, meaning its financial statements are not comparable with the consolidated financial statements prior to the filing. As a result, the first quarter ran from Feb. 10 through March 31.

In the first quarter of last year, Chesapeake reported a whopping $8.3 billion loss (minus $852.97/share).