Chesapeake Energy Corp. CEO Aubrey McClendon, who Thursday spoke to analysts publicly for the first time in months beyond the Oklahoma City boardroom, said the company remains on track to sell up to $14 billion of assets by the end of the year, including a package of properties in the Permian Basin. He’s also confident that even as the company continues to turn toward more oily production, natural gas prices will strengthen in the coming months. 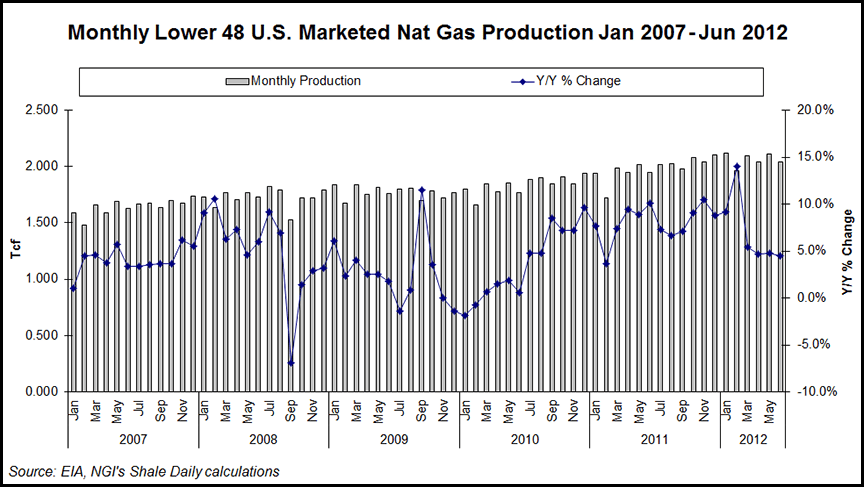 By the end of this month “the vast majority” of the Permian Basin properties should have found a buyer, he told the audience. In addition, a joint venture or an asset sale in its Mississippian Lime in northern Oklahoma and southern Kansas should be announced within the next few months, he said. Chesapeake’s debt totaled $14 billion in 2Q2012; plans are to to cut it to $9.5 billion by year’s end.

Chesapeake, as the second-largest gas producer in the United States after ExxonMobil Corp., is a “proxy for U.S. natural gas prices,” he said. “In the last four years it’s been pretty difficult. We’ve seen unrelenting declines and we’re trying to break those gravitational bonds…On the other hand, we think we see the beginnings of a multi-year strengthening…maybe not back to 2008 prices…but it’s just a matter of time and physics for the gas markets to get healthier. Not a day goes by that we do not see good news on the gas demand front…We expect to pick up a tailwind in 2013…”

The Barclays audience was particularly intrigued by McClendon’s thoughts about prices, and he spent several minutes offering his insight. “So much depends on weather…we wouldn’t have had the pricing in 2012 that we’ve had if we had the coldest winter rather than the warmest,” the CEO said.

“Looking at the strip today, if you consider where we are going to be at the beginning of April — if we have a normal winter — it will be a completely different market. We’ve seen a 900 Bcf overhang go away all in one year…

Chesapeake and other gas producers have stopped drilling as quickly as they ramped up, he told the audience. “We had a build-up that was unprecedented, and the runoff was equally unprecedented…I don’t know what the deficit will be” in 2013.

The company’s gas production outlook matters. Even though it is transitioning to become an oil/natural gas liquids producer, the company remains the No. 2 gas producer in the United States and should hold that position “for quite some time,” even with asset sales, said McClendon.

“It’s difficult…to make models to push out what the [U.S. gas] deficit will be…but we see production well in decline” by 2013, he said. He pointed to the most recent Energy Information Administration 914 data, which reported that domestic gas output was “basically flat month over month” from May to June.

“If we decline 7% year over year, and we adjust that for asset sales, we could be down 12% at a high water mark…Given all that, given a rig count that is lower, it’s hard for me to believe that we’re not going to see a stronger strip than we see today…We’re not hedging. I’m pretty impressed with how we’ve overcome a quite remarkable winter.

“The only risk is, are we locked in with incredibly warm winters with hot summers? Our meteorological team sees extended volatility…a decline in the arctic ice coverage that in their opinion has extended the volatility. We’re the odd man out…”

When asked if gas prices could hit $4-5/Mcf again, he said, “I could see that. It’s way above the market today but given the decline in production, the reversal in the storage overhang, that’s reasonable. The question is what do the producers do. Most observers think that producers would rush back in and drill gas wells.

“We won’t. We went from 110 [gas] rigs a year ago to 10. It’s not a question at this point whether you can make money at $4 or $5. We can make more money in an oil and liquids-rich well in the Haynesville, the Barnett, the Marcellus and be pretty competitive at that range. But one play alone can’t overcome a systemic decline.”

Chesapeake has seen a “big surge in growth, but we haven’t really seen a big surge in price-incentivized demand…Going forward we’re going to see a big demand pick up in transportation, in chemicals and all gas processes…This is our view of the world. Gas production growth comes to a halt. Associated gas production is more robust than industry can do as we move to liquids, and on top of that, an incredibly strong demand story is coming out…followed by gas exports in a few years…”