Oklahoma City-based Chesapeake Energy Corp. on Tuesday put the Chapter 11 process in the rear-view mirror and said it wants to take up the gauntlet to develop its substantial Mother Lode of Lower 48 natural gas. 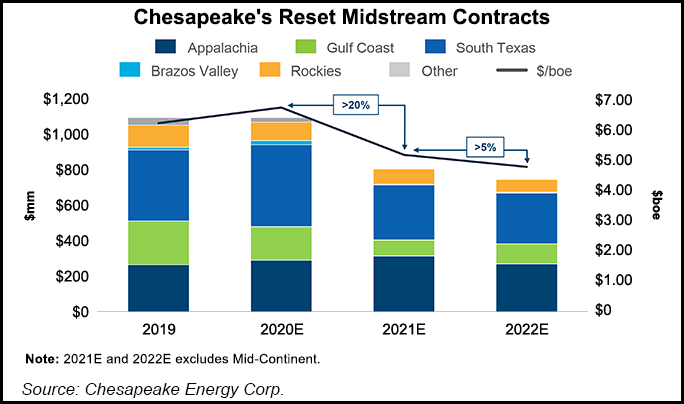 At one time the largest natural gas producer and biggest leaseholder in the onshore, Chesapeake succumbed to bankruptcy last June, and as of Tuesday had erased an estimated $7.8 billion in debt.

The restructuring marks a “new day,” CEO Doug Lawler said. “We have fundamentally reset our business, and with an improved capital and cost structure, disciplined approach to capital reinvestment, diverse asset base and talented employees, we are poised to deliver sustainable free cash flow for years to come.”

Chesapeake produced 435,000 boe/d on average during 4Q2020, with output 74% weighted to natural gas, 20% to oil and 6% to natural gas liquids. With its Midcontinent assets sold during the bankruptcy process, lower output is forecast this year, with average production of 427,000 boe/d. Capital spending of $700 million includes operating an average of six rigs and two fracture stimulation crews.

The company has “renegotiated or rejected” an estimated $15 billion in midstream contracts, with the number of contracts down to around 800 from more than 2,000. Long-term commitments have been reduced by 55%, or $3 billion. It also said it had achieved about $4 billion in contract savings. Williams in December received a past-due payment of $112 million from Chesapeake following a court-approved resolution as part of the bankruptcy proceedings.

Chesapeake as of Wednesday was to begin trading on Nasdaq under its former New York Stock Exchange ticker “CHK.”

The company has ambitions beyond advancing production. Lawler said there is an “unwavering resolve to leading a responsible energy future.” The company is pledging to achieve net-zero greenhouse gas (GHG) direct emissions by 2035 and eliminate “routine flaring on new completions immediately.”

“As we look ahead, maintaining the strength of our balance sheet, our cost leadership position, and our steadfast commitment to delivering consistent returns, while lowering our emissions profile will be paramount to our success,” Lawler said.

Chesapeake estimated it would have cumulative cash flow of more than $2 billion over the next five years with a strategy to reinvest 60-70% of cash flow.

With nearly  $8 billion in debt wiped off the books, Chesapeake as of Tuesday had debt outstanding of around $1.27 billion. The company also has a $2.5 billion borrowing base.