Chesapeake Energy Corp. has cut 13% of its workforce, or 400 employees, as part of ongoing belt tightening at the company, CEO Doug Lawler told staff in an email on Tuesday. 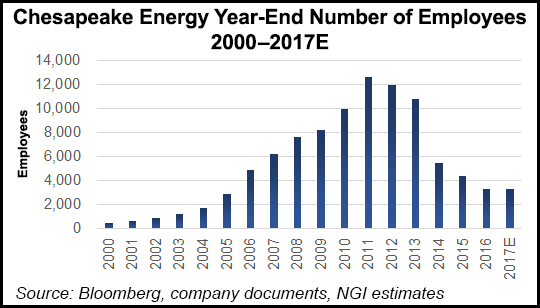 Lawler, who took over in 2013, has made financial discipline a top priority, setting out on a cost cutting binge in recent years that’s resulted in the company divesting 25% of its oil and natural gas wells.

“While those divestitures resulted in headcount reductions in the field, transition services agreements with buyers of certain assets caused us to not make corresponding staffing changes in Oklahoma City,” Lawler wrote in the email, which the company shared with NGI’s Shale Daily. “As those transition arrangements have now come to an end, and we continue to see increased efficiencies across the company, we needed to respond accordingly.”

Most of the layoffs were made at the Oklahoma City headquarters. Lawler said Chesapeake was providing assistance to those affected, but he did not provide specifics.

Months after he took over as CEO, Lawler cut more than 800 employees. During the commodities downturn in 2015, the workforce was reduced by another 740 employees. The company once had 12,600 staff members, a peak it reached in 2011 to serve a far larger acreage position.

After this week’s job cuts, Chesapeake has an estimated 2,900 employees. While it hasn’t officially released 2018 plans, management said it plans to focus on spending within cash flow and keeping optionality in its onshore portfolio. Chesapeake now works mostly in the Midcontinent, Eagle Ford and Haynesville shales, as well as the Powder River and Appalachian basins.

More divestitures could also happen this year as management has said it wouldn’t rule out selling a major asset.