Chesapeake Energy Corp. has cut its 2015 capital spending plans by more than one-third and trimmed its rig count to the lowest level in 11 years, but production still should increase by 3-5%, lifted, perhaps surprisingly, by the Haynesville Shale and Mississippian Lime. 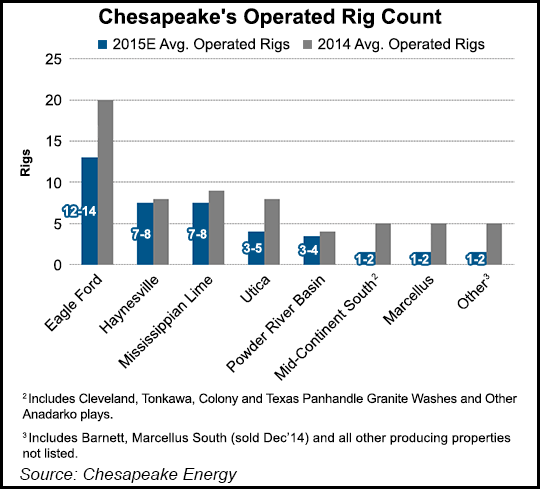 However, the Marcellus Shale has moved even lower on the priority list, with natural gas production now set to be curtailed through 2015.

“Our production of 729,000 boe/d for 2014 fourth quarter grew by 12% both sequentially and year-over-year after adjusting for asset sales,” CFO Nick Dell’Osso said during a quarterly conference call on Wednesday morning. However, “in December, we began curtailing approximately 250 MMcf/d of gross operated gas…in the Marcellus due to low in basin field prices. Other operators in the area began curtailing gas in the fourth quarter as well.

“These curtailments have totaled approximately 15,000 boe/d net and continued in the first quarter at rates as high as 20,000-25,000 boe/d,” he said. “I would also like to note that in our outlook, we are projecting curtailment to remain in place for all of 2015.”

Senior Vice President (SVP) Chris Doyle, who manages northern operations, including Appalachia, said the Marcellus has been “completely redefined…and rather than grow for growth’s sake,” the plan now is to “key in on value…We’re not going to give gas away.” Because of basin pricing, “we’re better off to curtail…than produce into a strained environment…We’re not going to give gas away in basin.”

The Marcellus “is a long-term asset for us and not one that I’m ready to completely shut the rigs down,” said Doyle. “It’s not that we won’t, it’s just not our focus today.”

Lower natural gas liquids (NGL) pricing, “primarily on weaker ethane and other product pricing, had a significant effect on our earnings and cash flow in the fourth quarter,” said the CFO. Gas revenues were reduced by almost $120 million, or 43 cents/Mcf. “While our hedges helped partially mitigate the impact of lower pricing and will continue to help us in 2015, we expect our realized pricing to remain low and have included our estimates of basis and nonbasis differentials…”

Operationally, “we believe that oilfield service cost reductions will become more apparent” as the year progresses. “As such, we are building in an estimate of around 10% in service cost savings for 2015 before any capital efficiency improvements by our operating teams.”

The balance sheet “is in great shape,” said Dell’Osso. Chesapeake completed selling its southern Marcellus assets to Southwestern Energy Co. in December, which brought in about $2 billion. It also put into effect a new revolving credit facility. “With over $4 billion of cash on hand at the end of the year, nothing drawn on our credit facility, and a net debt to capitalization ratio of around 29%, we are in excellent position to weather this current price environment and take advantage of opportunities to add shareholder value.”

CEO Doug Lawler, who helmed the conference call, said the company had taken and would continue to take “appropriate steps not only to weather the current difficult commodity price environment we face today, but to thrive in it.” Plans are to spend $4-4.5 billion total for capital expenditures (capex), down 37% from 2014 spending of $6.7 billion and from 2013’s $7.8 billion.

Analysts were keen to know more about where drilling activity is planned — and where it’s not. It wasn’t really a surprise that most of this year’s operated rigs, 12-14, are scheduled to work the Eagle Ford Shale, where low completion costs and strong infrastructure provide earnings potential, even at low oil prices. More intriguing are the seven to eight rigs each that are scheduled for the gassy Haynesville Shale and Mississippian Lime.

Appalachian operations are getting a pittance of drilling work this year, with three to five rigs set for the Utica, and one or two in the Marcellus. Three or four rigs also are planned to work the Powder River Basin. Midcontinent operations may see one or two rigs working.

Why Haynesville? Why Miss Lime? It’s a question of not only economics but also of technology, which makes each of those plays compelling, explained SVP Jason Pigott, the southern division chief.

The Mississippian and Haynesville “are some of the best investments we can make in the company, which is why we continue to have those higher rig rates there,” Pigott said.

“In the Miss Lime, the teams have been continually outperforming in the area,” Piggot said. “It’s one area that every time we drill a well, it continues to exceed our expectations. Even at $3.00 gas and $50.00 oil, we’re getting an 18% rate of return on the Miss Lime in our core, so they’re really strong returns.”

In the Mississippian, Chesapeake is building out water infrastructure as it goes along, “so it’s a little bit difficult to predict some of our expansion opportunities, but it seems to have continually outperformed our type curves,” Pigott said.

Regarding the Haynesville, “the teams are really just crushing it there on cost,” he said. “We do have the minimum volume commitments that we consider when we are making our economic decisions. When you consider that we’ll pay those gathering fees whether or not we drill, whether we produce a well or not, those returns are 40% rate of return internally…”

The Haynesville has been the place for “a lot of innovation and service cost reductions. We’ve got a budget. Those are difficult to put in a dollars per well because we’re drilling at least three or four different types of wells out there. We have single-unit laterals, which are running around the $7 million range, up to…7,500-foot laterals that can cost us almost $9 million. And we’ve even got a couple of laterals planned this year that would be 10,000-foot laterals that would be around the $11 million range.

“But just this week, we had one of our lowest cost wells go down and actually the field cost estimates on that were $6.3 million for a well that was just a standard section. So, we’re seeing really good improvement. It’s going to be difficult for us to put these costs in a dollar per well because we’re drilling a wide range of wells out in that field.”

Taken together, the Haynesville and Mississippian are “the most economic projects that we would invest in in our company right now,” Pigott said. “They’re really strong. The teams are continually pressing the limits there. We’ve tried new things, like stacked laterals, that have come online recently. We’ve tried to change it to our completion design and those results have both been really positive” in areas that historically have had lower estimated ultimate returns.

“Technological innovation there has just been fantastic.

“It’s really going to expand our inventory in the Haynesville. Additionally, we’ve just drilled the first and are drilling the second 7,500-foot lateral in the Haynesville. We should have those pads online too, and those generate very competitive rate of returns…”

During the fourth quarter, Marcellus output averaged 817 MMcfe/d net, with 100% pad drilling. Twenty-five wells were brought online with average peak rates of 15.2 MMcfe/d. This year, test wells in the Upper Marcellus are scheduled, but 70% less capex is planned. Production is expected to remain relatively flat.

In the Utica, where Chesapeake is the dominant driller and operates more than 55% of the wells, 4Q2014 production averaged 100,000 boe/d, up 17% sequentially.

In mid-December, Chesapeake achieved the highest production in company history while operating an average of 64 rigs, less than half the number of rigs used in 2012, Lawler noted. “Since 2012, we have improved our capital efficiency by 30-60% in each of our major operating areas. Through these efficiencies, the continuous improvement and the cost leadership of our employees, we have driven hundreds of millions of dollars out of our well costs over this time period…

“If we exclude acquisitions, our capital expenditures were 23% below 2013.”

Chesapeake was preparing for today’s price environment before it even realized it would have to, said the CEO.

“We eliminated $4.2 billion of leverage and complexity from our company in 2014 and ended the year with over $4 billion of cash on hand and we were completely undrawn on our credit facility,” Lawler noted. “As I’ve told our employees many times, the transformation that has occurred at Chesapeake over the past 18 months has prepared us for such a time as we see today. The current commodity price environment is difficult, but our focus on value and industry-leading performance is unchanged…”

Even with low commodity prices, the company is considering a litany of “opportunities” in the merger and acquisition space to strengthen the portfolio for the long-term, Lawler said. It’s not going to be an easy year, but the restructuring underway since Lawler came aboard in mid-2013 helped to prepare the company for the current commodity environment, he told analysts.