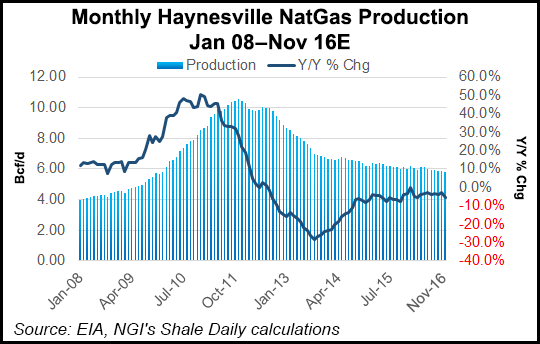 Adjusted for the one-time charges in 3Q2016, profits climbed to $27 million (9 cents/share), sharply ahead of Street consensus, which had pegged losses at 3 cents/share. In the year-ago period, the adjusted loss was $145 million (minus 14 cents).

“We continue to make progress in reducing leverage, decreasing total cash costs and improving future midstream expenses,” CEO Doug Lawler said during a conference call Thursday. “Our achievements in these areas, particularly in regard to our balance sheet, provide a stronger foundation for improving profitability and enhanced returns from our capital program in 2017 and beyond.”

During an analyst day conference in mid-October, Lawler highlighted the progress made to date by the debt-ridden independent, despite depressed commodity prices (see Shale Daily, Oct. 20). He divulged a tad more information Thursday about the super laterals being drilled in the Haynesville, which he has dubbed “proppant-geddon” because so much sand is being used to fracture (frack) wells to increase output.

“In the Haynesville, we are currently fracking a 10,000-foot lateral well with 50 million pounds of sand, or roughly 5,000 pounds/lateral foot at ultra-tight cluster spacing,” Lawler said. “This completion will have the largest number of stages we have ever pumped in the Haynesville in a single well, and the well should be placed to sales in the next few weeks…” He promised more information for the investment community before the end of the year.

The CEO also offered more insight into production results from Chesapeake’s newest attraction, a stacked formation in Oklahoma that was unveiled in October.

“In the Midcontinent, we recently introduced a new concept area that we call the Wedge, in which Chesapeake has approximately 870,000 net acreage under lease and where we are targeting several oil and gas bearing stack horizons. We had two recent step-out wells in the area that are currently producing 1,000-1,400 boe/d, 50% to 70% of which is oil from a one-mile appraisal well. We believe the development potential in this area utilizing two-mile laterals is tremendous…

“With an inventory of over 17,000 wells still to be drilled across six major operating areas with 5,600 of those wells currently having a rate of return greater than 40%, we are confident that the Chesapeake operating machine is stronger today than at any other time in our history.”

Chesapeake is currently running 11 drilling rigs across its operating areas, three each in the Eagle Ford, Haynesville and Midcontinent area and two in the Utica. Existing rigs would be used through year’s end to drill 50-60 wells and place 100-110 on production.

Revenue in 3Q2016 declined by 33% year/year as average realized commodity prices declined and production volumes fell. Chesapeake made up part of the shortfall by improving capital efficiencies, which led to total capital investments falling to $412 million from $623 million.

Operating expenses continued to decline between July and September, with average expenses of $2.80/boe, while general/administrative (G&A) expenses were $1.08/boe. Combined production and G&A expenses fell 20% year/year and were 5% lower sequentially. Production expenses fell by 25 cents/boe from the second quarter.

At the end of September, debt was $8.7 billion, versus $11.7 billion in 3Q2015 and $9.7 billion at the end of 2015. To improve its bottom line, Chesapeake conveyed its Barnett Shale interests to Total SA and simultaneously terminated future midstream commitments associated with the asset in a transaction that was completed on Monday (see Shale Daily, Sept. 9). Chesapeake paid $334 million to cancel an existing gathering agreement with Williams Partners LP.

Chesapeake also has agreed to sell most of its upstream and midstream properties in the Devonian Shale of West Virginia and Kentucky, which includes 882,000 net acres, 5,600 wells and related gathering assets and equipment. Chesapeake retained its deep drilling rights. In connection with sale, the company plans to repurchase one of its two remaining volumetric production payment transactions.

In addition to terminating the gas gathering agreement in the Barnett, Chesapeake renegotiated an existing cost-of-service agreement with Williams in the Midcontinent in exchange for a $66 million payment. The company also accelerated the value of a long-term gas supply contract by selling rights for $146 million. In connection with this supply contract sale, the company reversed a $280 million derivative asset, which was reflected as an unrealized hedging loss.

In the final three months of this year, average production is forecast at 550,000-570,000 boe/d, which includes one month of production from Barnett Shale assets, which were recently sold With oil production expected to average 91,000 b/d in October, the company is forecasting 4Q2016 output to be about 90,000-95,000 b/d.