FERC has approved the Corpus Christi Liquefaction LLC export project and related pipeline proposed for the Texas coast. It is the second such project of Lower 48 liquefied natural gas (LNG) export pack leader Cheniere Energy Inc. and the fifth terminal to receive the Commission’s blessing. 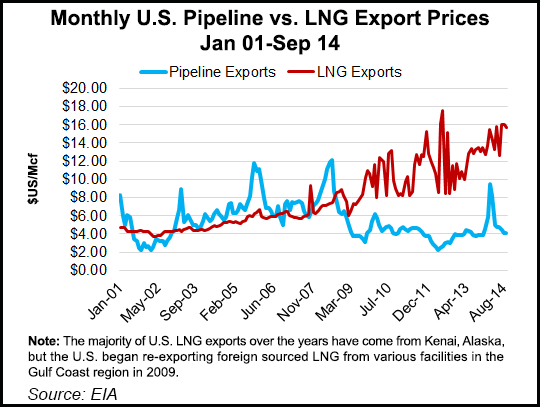 The Federal Energy Regulatory Commission has now approved LNG infrastructure with combined export capacity of nearly 9 Bcf/d. The latest approval comes amid a shrunken spread between U.S. natural gas and oil-indexed global LNG prices. One Lower 48 terminal project appears to have thrown in the towel due to the weaker spread (see Daily GPI, Dec. 30), and analysts have voiced concerns about the viability of others, particularly those not underpinned by long-term contracts (see Daily GPI, Dec. 24).

Corpus Christi is the first greenfield LNG export terminal to win FERC approval, the previous approvals having been granted to projects at existing import terminal sites that were repurposed to also export. The project has yet to receive non-free trade agreement export approval from the U.S. Department of Energy. Analysts at ClearView Energy Partners LLC said they don’t expect this to come until any requests for rehearing on the Commission’s order are resolved. The Sierra Club opposes the project.

The terminal would be on the northern shore of Corpus Christi Bay, at the north end of the La Quinta Channel, northeast of the city of Corpus Christi in San Patricio and Nueces counties. It would have the capability to liquefy for export about 15 million metric tons per annum (MMTPA) of LNG and vaporize 400 MMcf/d of imported natural gas. Cheniere Marketing LLC would export and import the LNG by carriers, making between 200 and 300 trips per year through Corpus Christi Bay.

The facility would have three liquefaction trains, each with capacity of 5 MMTPA. Pending export, the LNG is to be stored in three proposed 160,000 cubic meter full-containment storage tanks. The project would also include two trains of ambient air vaporizers, each with an average vaporization capacity of 200 MMcf/d of natural gas.

The associated Cheniere Pipeline would be a 23-mile, 48-inch diameter, bi-directional pipeline from the terminal to a point near the City of Sinton, TX. It would transport gas to the terminal for liquefaction and export, as well as transport regasified imported LNG to interconnections with the existing pipeline systems of Texas Eastern Transmission Corp., Kinder Morgan Tejas Pipeline LLC, Natural Gas Pipeline Company of America, Transcontinental Gas Pipe Line Corp., and Tennessee Gas Pipeline Co. The pipeline would have a peak capacity of 2.25 Bcf/d. Two compressor stations, and six metering and regulation stations also are proposed along the pipeline.