Cheniere Energy, Inc. CEO Jack Fusco said Monday demand growth for liquefied natural gas (LNG) has only increased since the start of recovery from the Covid-19 pandemic and that growth is expected to be sustained. 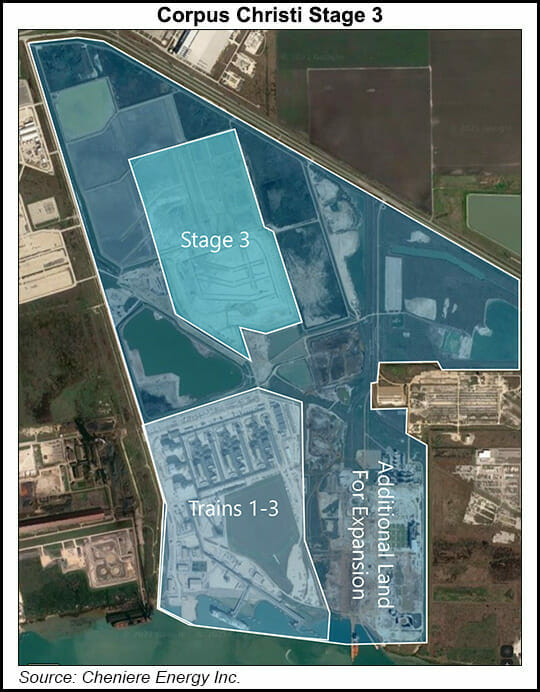 During an energy transition panel on the opening day of CERAWeek by S&P Global in Houston, Fusco said predictions that customers would be lining up for U.S. gas have proved true. Capacity for the newest trains, including from Sabine Pass LNG in Cameron, LA, and the expanding Corpus Christi LNG export facility in South Texas, are “sold out through the 2040s.”

It’s news that could hold promise for U.S. gas exporters and the burgeoning industry. It also means more volatility and exposure such as the ongoing invasion of Ukraine by Russia.

Houston-based Cheniere, the largest domestic LNG exporter, has been betting for more than a decade that domestic gas would be a key product for world economies, including as a transition fuel as the world moves to net-zero carbon.

Cheniere’s investment is now up to about $47 billion with the announcement Monday of an additional $7 billion for trains at Sabine Pass. The company completed Train 6, boosting the production capacity to 30 million metric tons/year (mmty).

The company also on Monday said it signed an engineering, procurement and construction contract with Bechtel for the 10 mmty Corpus expansion.

Fusco underscored that the balance between demand and future supply has meant plenty of “turbulence” for the LNG industry as a whole, some of which was predicted. However, the recent conflict in Ukraine has proven how vulnerable energy markets are.

“The turbulence has just begun,” Fusco said. Geopolitics has exacerbated market dynamics more than anticipated, he noted, but the market was beginning to tighten last year.

Market instability through most of 2021 left the company exposed to losses for the fiscal year, despite record high revenues from red hot spot gas prices.

The invasion of Ukraine and a continued lack of Russian spot gas to Europe has only fed the flames of volatility for LNG prices, setting both Dutch Title Transfer Facility and Spot Japan-Korea Marker in flux over the past weeks.

Fusco noted that European gas was trading at around $110/MMBtu on the first day of the week. The price, he said, is “unsustainable.”

“At this type of volatility and high prices, I begin to worry about my customers.”

Why Is There A ‘Yawning Gap’ For LNG Supply?

S&P Global Chief Strategist of Global Gas and Energy Michael Stoppard said there was a “yawning gap” for global LNG supplies, which will be top of mind for Europe as it seeks to replace Russian supplies. However, reducing gas also holds implications for the continent’s decarbonization efforts.

CEO Tengku Taufik of Malaysia’s state-owned Petronas, said there is a need for gas for growing economies to grow and transition beyond coal-fired power.

“Whatever energy transition we embark upon must be just and responsible,” Taufik said.

Petronas’ portfolio consists of 70% natural gas assets. Taufik said its interests in distributing gas to developing economies would only increase in the near-term.

Taufik’s comments ran parallel with remarks earlier in the day from former senator and the Obama administration’s Secretary of State John Kerry. Now the Biden administration’s U.S. Special Presidential Envoy for Climate, Kerry called natural gas “a key component of transition.” Using African countries as an example, Kerry said a large number of developing countries that only make up a small fraction of global emissions, which he estimated at .55%, will need access to cleaner and affordable energy to meet climate goals and expand their economies.

However, in order to make sure the oil and gas industry can provide essential fuel at affordable prices, Hess CEO John Hess said energy powerhouses like the United States need to quickly develop long-term master plans for decarbonization and stick to them.

“We need a price on carbon and we need it now if we are going to invest more in clean energy and at the same time have an orderly or calm energy transition,” Hess said.

Fusco said he understands that governments often try to “pick a winner” when it comes to transition technology and energy sources. The best approach, he said, would be to allow private companies to make secure investments and adapt, as they’ve done previously.

“I mean, that’s how the LNG industry was formed,” Fusco said, “and what we’re good at. Let the businesses innovate.”