Cheniere Energy Inc. reported a big boost from customers that elected to cancel liquefied natural gas (LNG) cargoes in the second quarter, earning $708 million in fixed fees from those opting out of lifting scheduled volumes. 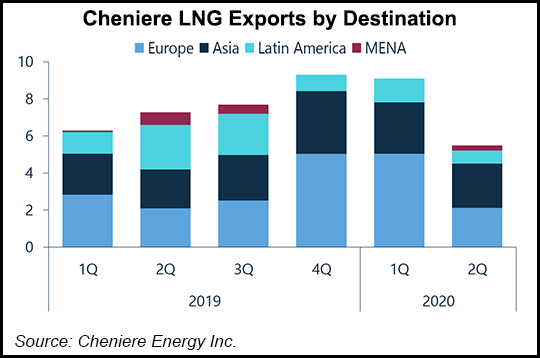 The cancellations helped push up margins that led Cheniere to a profit during what was a painful second quarter for the global gas trade. Excess supplies continued to hit lackluster demand dented by the Covid-19 pandemic, which weighed heavily on prices.

Cheniere’s customers couldn’t turn a profit at those prices and elected to cancel cargoes, a theme that has dominated headlines at other Lower 48 export facilities for months now. The bulk of the company’s production is under long-term, take-or-pay contracts that generally allow customers to cancel cargoes up to 60 days before they are loaded.

The company did not quantify how many cargoes were canceled, but it exported 78 cargoes in the second quarter, compared with 104 at the same time last year. Meanwhile, loaded volumes also slipped to 278 TBtu in 2Q2020 from 360 TBtu in the year-ago period.

Global supplies have fallen for about four months in a row. Feygin said supply utilization was at 82% on average in the second quarter versus 93% in the first quarter.

“While it’s too early to call this a bullish market, we believe the recent slowdown in production is constructive in the near-term and reduces the risk of reaching maximum natural gas storage levels too early in the year at European storage facilities,” Feygin said during a call on Thursday to discuss the quarterly results.

“While the environment in the spot LNG market remains relatively weak, I’m encouraged that dynamics in the LNG market are improving and unfolding as we have expected,” said CEO Jack Fusco. “As worldwide economies have begun to recover from the pandemic, we are beginning to see short-term gas prices stabilize and spreads are beginning to improve as we look into the winter months and beyond.”

With more than 150 million metric tons per year (mmty) of potential LNG capacity delayed or canceled, “we at Cheniere are well positioned and ready to address long-term supply shortages and capture demand opportunities for competitively priced LNG in the global market.”

Cheniere also moved up the completion date for its sixth train at Sabine Pass LNG in Louisiana, which would boost overall LNG production capacity to 30 mmty, to the second half of 2022 (2H2022) from a previous target of 1H2023. Train six is 64% complete. The third train at Corpus Christi LNG in South Texas, which would boost capacity to 15 mmty, is still expected to be completed in 1H2021.

The company reported second quarter net income of $197 million (78 cents/share), compared with a year-ago net loss of $114 million (minus 44 cents).