Cheniere Energy Inc. has signed an agreement for Tourmaline Oil Corp. to supply natural gas for an expansion project at Cheniere’s Corpus Christi export terminal in South Texas at prices linked to the Asian spot market. 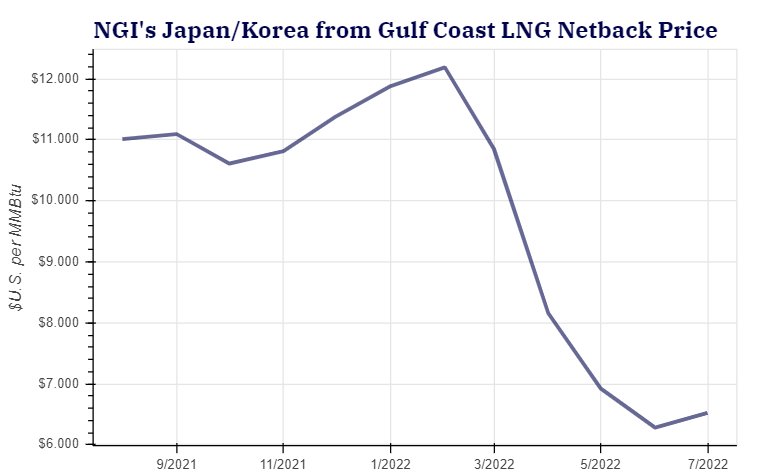 The deal brings Cheniere another step closer to sanctioning the Stage 3 liquefied natural gas (LNG) export expansion project, but it also shows the company’s willingness to turn the traditional project financing model on its head. Under the agreement, an affiliate of Tourmaline, Canada’s largest natural gas producer, would supply the expansion with 140,000 MMBtu/d of natural gas for 15 years beginning in 2023.

But Cheniere would pay Tourmaline for the gas at prices linked to the Japan-Korea Marker (JKM), a pure-LNG benchmark. Cheniere would then market and sell 850,000 metric tons per year and deduct shipping and liquefaction charges from the price it pays for the gas.

Cheniere CEO Jack Fusco said the agreement “demonstrates the breadth of Cheniere’s natural gas resource supply and the range of our commercial options.” He said the agreement would help support a final investment decision for the expansion and reinforces the company’s record of creating “collaborative, innovative solutions to meet customers’ needs and supports Cheniere’s growth.”

Cheniere is the largest U.S. LNG exporter. It has traditionally purchased gas under a model linked to Henry Hub. The company largely financed its existing liquefaction trains by securing 85% of their output under long-term sales and purchase agreements with foreign buyers. Those sorts of deals, however, are becoming harder to come by as LNG production has increased and shorter-term spot deals are on the rise.

All of the GSAs signed by Cheniere for the Stage 3 expansion differ from the company’s earlier model, according to Evercore ISI analysts led by Sean Morgan. In the past, Cheniere passed through commodity risk to its offtakers, who typically paid 115% of the Henry Hub price and a liquefaction fee.

“Cheniere can use its marketing and trading muscle to strike deals with gas sellers that can serve a financeable basis for a project export syndicated finance program,” Morgan’s team said.

The GSAs benefit producers like Tourmaline, Evercore added, because they can take advantage of Cheniere’s marketing strength to gain exposure to Asian markets, where natural gas fetches a steep premium compared to North American prices.

Indeed, Tourmaline CEO Mike Rose said the agreement fulfills an important step in the producer’s quest to diversify the markets it sells into.

LNG buyers at other U.S. terminals do most of the heavy lifting. They pay a tolling fee to have natural gas they secure liquefied. They then secure ships and pay the costs to move American LNG overseas to their end-users.

Cheniere procures feed gas, liquefies the gas and sells it to various buyers on the term and spot markets. The company also has its own shipping capacity.

The Stage 3 expansion would include up to seven midscale liquefaction trains with a nominal production capacity of 10 million metric tons/year (mmty). It has received all regulatory approvals. If built, the expansion would boost the overall LNG output at Corpus Christi to 25 mmty.