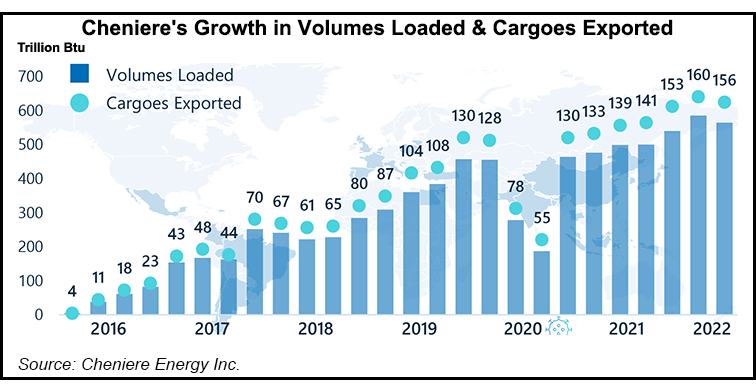 The global methane emissions reporting partnership enables Cheniere to build on its emissions monitoring, “so we can continue to provide reliable LNG supplies to the European Union and other international markets to support energy security now and the transition to a lower-carbon future,” Executive Vice President Anatol Feygin said.

As an OGMP 2.0 member, Cheniere would work toward reporting source-level emissions associated with all operated assets. It also would work to decrease GHG emissions in a set timeframe, according to the OGMP 2.0 framework.

According to Cheniere, academic institutions, including the Colorado School of Mines, provide guidance on data collection and independent verification of measurement results.

Cheniere noted that since the beginning of the year, about 70% of the cargoes have been delivered to Europe, “double the rate exported in 2021,” Vice President of Public Affairs Eben Burnham-Snyder told NGI.

“The OGMP 2.0 reporting framework is an important tool to establish more accurate and transparent information about methane emissions on a global scale,” said Equinor’s Helge Haugane, senior vice president for gas and power. He added that imports of LNG from the largest U.S. LNG producer are “key to Europe’s energy security.”

Cheniere joined a growing list of 85 companies upon its entry into OGMP 2.0. Initially formed in 2020 by 62 oil and natural gas operators, including BP plc and Shell plc, OGMP 2.0 aims to improve industry transparency in methane emissions reporting and encourage progress to reduce GHG pollution.