Cheniere Energy Inc. CEO Jack Fusco expects the sixth train at the Sabine Pass liquefied natural gas (LNG) export facility in Louisiana to start up by the end of 2021. 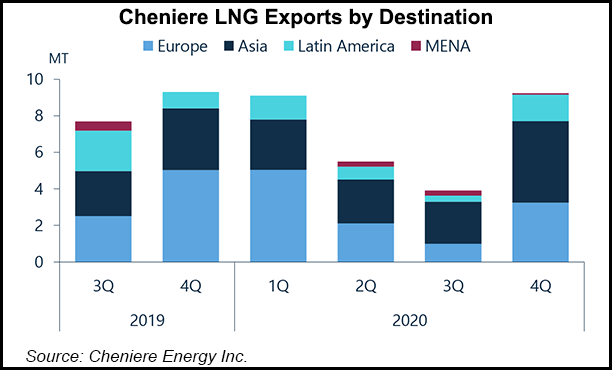 Construction on Train 6, Cheniere’s ninth overall between Sabine Pass and the Corpus Christi facility in South Texas, is about a year ahead of schedule and is expected to wrap up in the second half of next year.

“Hopefully at the end of this year, we’ll be producing LNG on our train number nine,” Fusco said Monday during the virtual CERAWeek by IHS Markit conference.

While Cheniere is focused on those nine trains, Fusco said the company has achieved another 5 million metric tons of LNG capacity — equivalent to a 10th train — through debottlenecking efforts.

“Those portfolio tons that aren’t used to help finance infrastructure, we’ve been very successful at selling into some of the markets that maybe aren’t as credit worthy, and need natgas,” Fusco said. “So we’re happy to help meet their needs on a shorter term basis, if we don’t have to use it to build our infrastructure.”

Fusco made the disclosure despite a turbulent year for energy as the Covid-19 pandemic dampened demand. However, LNG is expected to rebound as many global buyers favor natural gas, which is marketed as a cleaner alternative to other fossil fuels such as coal and crude oil.

However, LNG is also facing scrutiny over its carbon footprint, with global customers demanding more accountability and transparency on the part of U.S. players for emissions associated with their products.

Cheniere recently addressed this call with a plan for cargo emissions tags to provide buyers with information on emissions associated with each cargo. Cheniere said last week it was the first attempt by a major LNG producer to track the emissions on every cargo it produces, though Fusco on Monday acknowledged achieving it would be no easy task.

“We bought from 68 different producers on 15 different pipelines yesterday,” Fusco said. “Some days we buy from over 100 producers on 26 different pipes. So it’s not an easy situation to be able to come up with a carbon emission that is specific for that cargo.”

The tags, which are to be rolled out in 2022, would use the company’s proprietary life-cycle analysis model, which was built using frameworks developed by the U.S. Department of Energy (DOE). In addition, it would use publicly available data from value chain participants, as well as operational data from the Sabine Pass and Corpus Christi facilities. Emissions estimates would be provided from the wellhead to cargo delivery point.

Fusco said the company has already seen some improvements to the DOE’s life-cycle analysis model from 2014.

“I think we’re going to continue to refine and improve upon that, and deliver what our customers need, which is an accurate accounting of carbon emissions so they can offset those emissions.”

The tags would use a carbon dioxide equivalent calculation that takes into account methane emissions as well as those of other pollutants, Fusco added.

As for its carbon footprint, Fusco also said the company has been able to reduce carbon intensity at its facilities through debottlenecking and optimizing the maintenance schedule. That means performing maintenance during unscheduled downtime, such as on foggy days when ports are closed, he said.

“That gives us an opportunity to shut down some of the trains to do that preventive maintenance or do emissions tuning on some of the gas turbines,” he said. “So there’s quite a bit you can do on the operations and maintenance program to make sure that you get your carbon intensity down.”

Looking ahead, Fusco expects to see Asia in general, and China in particular, drive demand for LNG. However, he also expects demand to spread quickly.

“There’s a little over 40 countries, as you know, that utilize liquefied natural gas,” he said. “Our forecast is rapidly going to be over 60. So we’re very excited about hitting new markets and having the opportunity to meet those customers’ needs.”