Cheniere Energy Inc. has requested FERC approval to place the third train in service next month at its Corpus Christi liquefied natural gas (LNG) export terminal in South Texas, which would ramp up capacity by 4.5 million metric tons/year (mmty). 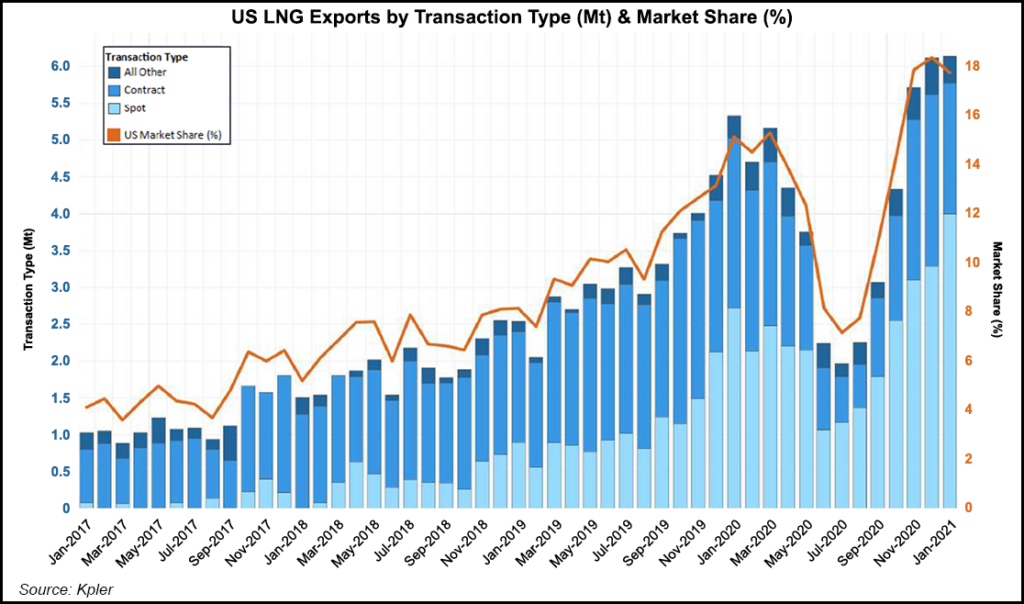 The company requested permission in a letter filed with the Federal Energy Regulatory Commission on Wednesday to bring the train online by March 12.

The third train would bring total output at the facility to 15 mmty. Cheniere in December loaded the first commissioning cargo from the third train.

Cheniere sanctioned the third train in 2018, the same year the Corpus terminal produced its first LNG. In November 2019, the company moved up its timeline to complete the third train to the first half of 2021, several months ahead of schedule.

A sixth train also is under construction at its Sabine Pass LNG terminal in Louisiana, which was 71% complete at the end of September. The sixth train would boost production capacity at that facility to 30 mmty.

Global LNG supply grew by 100 million tons (Mt) between 2016 and 2020, driven largely by Australia, Qatar and the United States, according to data intelligence firm Kpler. Despite the pandemic, LNG supply last year grew by 4 Mt, driven mainly by U.S. growth.

U.S. capacity is expected to increase to 71 mmty this year, driven by the Corpus expansion and more operating efficiencies at existing terminals, according to Kpler.

Winter demand for LNG is strong, and feed gas deliveries to U.S. terminals have been at or near capacity most of the season. Domestic exports reached 6.14 Mt in January during a cold snap in the northern hemisphere that drove up demand, rebounding from a low of 1.97 Mt in July when prices were down amid a supply surplus.

Higher demand has left natural gas storage stocks in Asia and Europe lower, while the global economy continues to recover from low points brought on by Covid-19 last year. LNG buying this year is expected to remain above 2020 levels, supporting U.S. exports. Recent NGI data showed U.S. LNG in the money both in Asia and Europe through the remainder of the year.