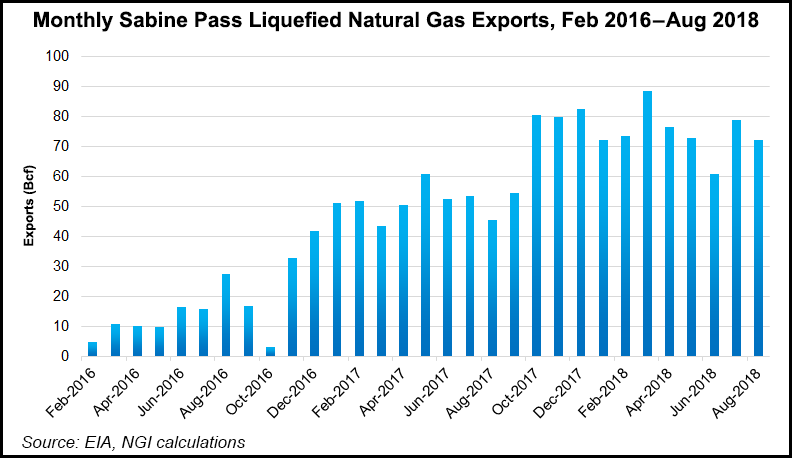 The 24-year SPA with PGNiG is the for the sale of approximately 1.45 million tonnes per year (mtpy) of liquefied natural gas (LNG) on a delivered ex-ship basis. Deliveries will begin in 2019, with the full annual quantity starting in 2023. The purchase price for LNG is indexed to the monthly Henry Hub price, plus a fee.

“Execution of this SPA brings the total amount of contracted volume we have signed this year to over 6 million tons, with an average contract tenure of almost 20 years and expected aggregate notional revenue of nearly $50 billion,” Cheniere CEO Jack Fusco said Thursday on a call to discuss third quarter earnings. “Our contracting success demonstrates the value buyers place on Cheniere’s ability to provide reliable energy solutions tailored to customers’ needs.”

Since the second quarter, Cheniere also has secured a 25-year SPA with CPC Corp. Taiwan for 2 mmty beginning in 2021. Its Vitol deal was for 0.7 mtpy beginning this year.

Fusco said Cheniere’s full-service business model approach has been key in its success in continuing to negotiate long-term contracts with counterparties. Cheniere purchases natural gas from multiple states across the country and Canada, processes it into LNG and then offers its customers the option to load it onto their vessels at its terminals or have it delivered.

“They’re building infrastructure and they need to have an affordable dependable supply of fuel for that infrastructure. Since we’re full service and delivering straight at the utility doorstep, they are willing to sign up with us and quite honestly, pay a premium for those services.”

The Houston-based LNG developer also signed an engineering, procurement and construction contract with Bechtel Oil, Gas and Chemicals, Inc. for the Train 6 expansion at Sabine Pass LNG, “locking in cost and construction schedule,” Fusco said. Cheniere has released Bechtel to do “some early works and get Train 6 underway” prior to its investment decision.

“The process of releasing Bechtel under a limited notice to proceed at Corpus Christi Train 3 worked well, and we expect that to be the case for Train 6 at Sabine Pass also,” the company chief said.

Commissioning of Sabine Pass Train 5 continues as feed gas was introduced in September, and first LNG was produced in late October. Cheniere expects substantial completion to be achieved during the first quarter of 2019.

“Based on current construction schedules for Train 5 and Train 1, our marketing function is expected to gain access to incremental LNG volumes aggregating between 2.5 million to 3.5 million tons in 2019, ahead of the commitment of our long-term SPAs related to those trains. There is also potential for meaningful incremental volumes related to Corpus Train 2 in late 2019,” Fusco said.

During the third quarter, Cheniere produced and exported 65 LNG cargoes from Sabine Pass and as of Oct. 31, more than 215 cargoes had been produced, loaded and exported from the terminal year-to-date. More than 475 cumulative cargoes have been exported since startup, reaching 29 countries and regions worldwide, Fusco said.

Given its year-to-date performance and a bump in its average adjusted run rate production guidance to 4.4 million to 4.9 mtpy of LNG per train, the company raised and tightened full-year 2018 guidance for both consolidated adjusted earnings before interest, tax, depreciation and amortization (EBITDA) and distributable cash flow (DCF.) It now expects to generate between $2.45 billion and $2.55 billion of consolidated adjusted EBITDA and between $500 million and $600 million of DCF.

“Our strong quarterly performance was supported by a steady and reliable operations at Sabine Pass and continued strength in LNG supply and demand fundamentals throughout the quarter, which we expect to continue as we approach the peak winter season,” Fusco said.

The company, which closed its merger with Cheniere Energy Partners LP Holdings, LLC (CQH) during the quarter, is also focusing on developing additional liquefaction and strategic projects that create a path for future cash flow growth. It received the FERC scheduling notice for a Corpus Christi Stage 3 in August and “is encouraged with the regulatory progress in place and that project,” Fusco said.

It is now exploring additional liquefaction capacity in Corpus Christi as it seeks to leverage its infrastructure to develop “new liquefaction capacity with market-leading economics.” Given the facility’s proximity to key gas supply hubs, CFO Michael Wortley said Corpus Christi was “absolutely a better place” to be right now from a gas supply standpoint.

“Permian [Highway Pipeline] and Gulf Coast Express are each being built directly into our existing infrastructure to feed ourselves. That’s really a great place to be from a supply standpoint,” Wortley said.

As for more long-term plans for the Texas facility, Fusco said he thinks “we can double the size of the company quite honestly at that site from the way I think about it from today, from the trains that we’re currently building or that are operating. I think there’s probably another 30 million tons at Corpus that can be built in addition to Train 3.”

Meanwhile, Cheniere’s MIDSHIP pipeline project received a Federal Energy Regulatory Commission order in August and its expects to begin construction in the near future to meet an in-service date in the second half of 2019.