Cheniere Energy Inc. loaded a record 141 liquefied natural gas (LNG) cargoes in the third quarter as prices skyrocketed and global demand increased ahead of the winter. Management expects more of the same in the coming months. 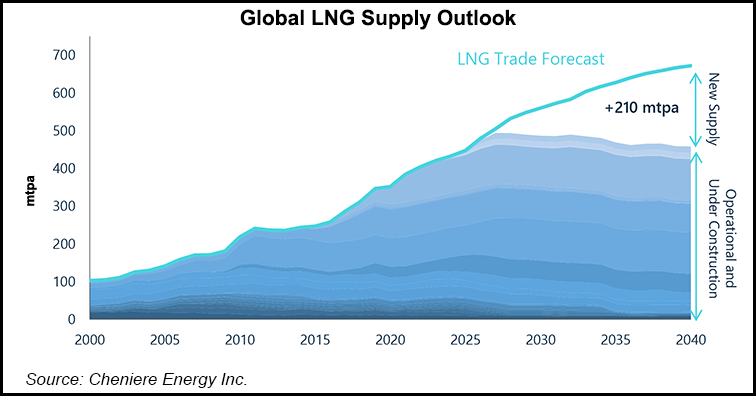 “In the short term, we have witnessed significant volatility and record prices for LNG and natural gas across the globe,” said CEO Jack Fusco during a call to discuss quarterly results. “With storage levels in key demand centers below historic levels as we approach the winter season, we expect demand and prices to remain elevated into 2022.

Cheniere said global LNG consumption jumped 7% in the third quarter as markets across the globe competed for energy amid other commodity shortages, a need for cleaner fuels and resurgent demand as economies recover from the Covid-19 pandemic. European and Asian benchmarks touched highs of more than $50/MMBtu during the most chaotic stretches of trading during the period, reversing the historic lows of last year when they traded near $2.

“Barely a year ago, we were in a market environment of low prices and pandemic-impacted demand,” Fusco said. “Today, however, it’s clear the absolute critical role natural gas and LNG have to play in a global energy transition.”

Is Natural Gas Demand At Risk?

“Sustained market volatility could be disruptive for our industry as it potentially incentivizes end-use customers to utilize cheaper, higher polluting fuels in the shorter-term,” he said.

Feygin stressed that growing U.S. exports have helped to offset declines at legacy LNG facilities across the world, proving “instrumental in providing much-needed supplies to the market.” He said 28 million tons (Mt) of LNG capacity have come online in the last two years, most of which is in the United States, offsetting the 19 Mt decline in production at legacy plants over the same period.

“This new supply has played a critical role in alleviating the global supply shortage while helping mitigate some of the underlying volatility,” Feygin added.

A gap in supply that has emerged in recent years with the delay of project final investment decisions and sky high prices has brought long-term buyers back to the table. Cheniere signed agreements for offtake with ENN Natural Gas Co. Ltd. and Glencore plc in recent weeks. About 90% of the output from Cheniere’s nine liquefaction trains are now under contract, management said.

Where are LNG Expansions Planned?

Plans to sanction an expansion at Cheniere’s Corpus Christi LNG export terminal in South Texas remain on track for next year. Fusco said the company has enough flexibility that it can provide ENN and Glencore with LNG from any of its projects. Cheniere needs to contract another 3 Mt annually under long-term deals to move ahead with the expansion at Corpus Christi, he said.

In all, Cheniere loaded 500 TBtu of LNG during the third quarter, up 167% from the year-ago period, when an oversupplied market and low demand amid the pandemic outbreak hit the global gas market hard. Cargo loadings were up 156% over the same time.

Volumes are likely to move higher as feed gas was introduced to Train 6 at the company’s Sabine Pass export terminal in Louisiana in September. The terminal is expected to begin commercial operations during 1Q2022.

Third quarter results were mainly impacted by losses on natural gas and LNG hedges, as well as long-term gas supply agreements with North American producers at prices indexed to the Japan-Korea Marker, which hit record highs during the quarter.

Cheniere has signed more of the so-called integrated production marketing (IPM) agreements with producers in recent years. The IPMs have elevated its risk profile and subjected it to commodity price fluctuations that it’s more insulated from under the long-term offtake agreements that underpin most of its business. Cheniere’s LNG buyers assume most of the price exposure under those agreements.