Cheniere Energy Inc. exported a record number of liquefied natural gas (LNG) cargoes during the first quarter despite the impacts of Winter Storm Uri, which shut down the Corpus Christi LNG plant in South Texas for several days. 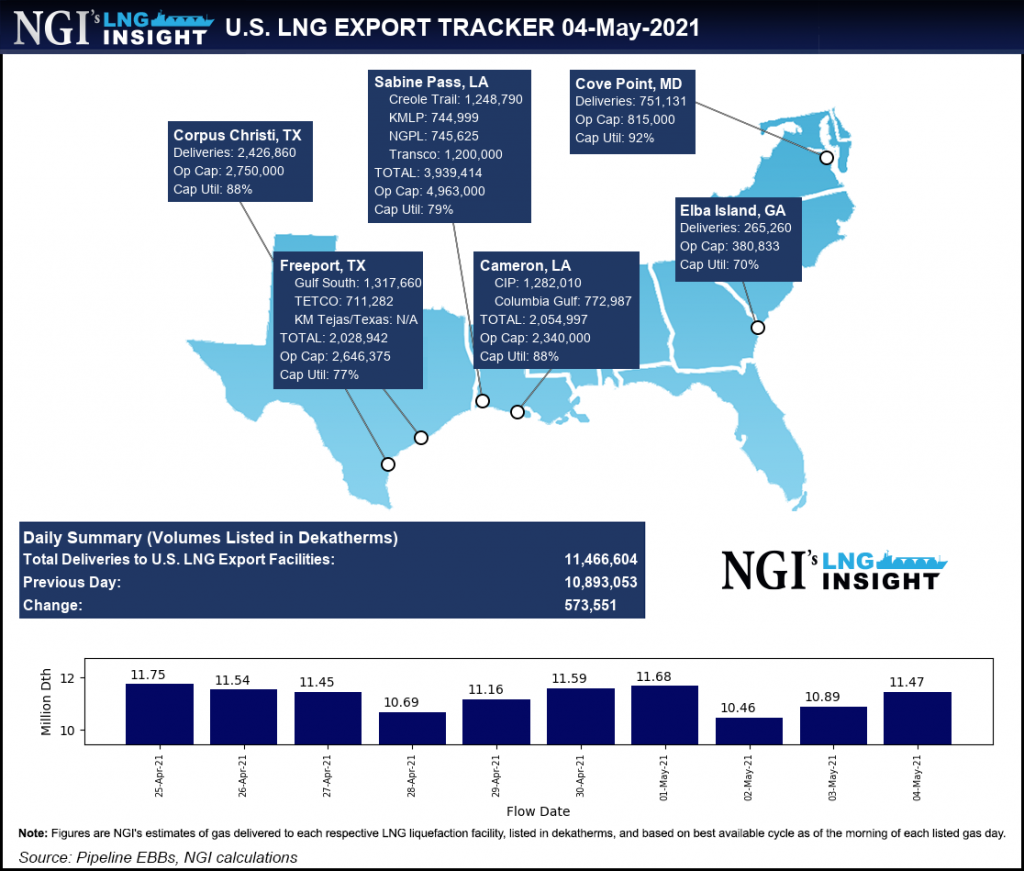 The company said in its first quarter earnings report it shipped 133 cargoes during the period, compared with 128 in 1Q2020. The cargoes totaled 480 TBtu, up from 453 TBtu.

The bump partially came from what Cheniere management called “robust” commissioning cargoes from the third train at Corpus, which came online in March. The company reported 28 TBtu in commissiong volumes in the first quarter.

During the quarterly earnings call, CEO Jack Fusco said Cheniere was able to conduct some maintenance at the Corpus facility during the winter storm, leading to improved production.

“When we came back, we came back strong, and we revised our production forecast and we found a significant number of additional cargoes that we can monetize this year,” he said.

Fusco has previously said the company achieved an extra 5 million metric tons/year (mmty) through debottlenecking efforts and is finding customers to take its excess volumes. Cheniere said it inked multiple fixed-fee LNG sales agreements for portfolio volumes amounting to about 1.7 million metric tons (mmty) across 2022 and 2023.

Chief commercial officer Anatol Feygin said there is a “strong appetite” for midterm agreements “as both intermediaries and end-users add diversity, security and flexibility to their portfolios.”

The company expects the global LNG market tightening at a rapid pace as demand is expected to continue to grow, especially in Asia.

“We discussed over the last few years that we viewed 2021 as a transition year to a tight market,” Feygin said. “That has played out so much faster than we expected.”

He also painted a positive outlook for long-term offtake contracts, which make up the bulk of Cheniere’s business. Factors such higher oil prices prices and sluggish supply growth “will remain quite sanguine on the long-term contracting market for our products over the coming quarters and years, as the demand for LNG will continue to increase over time, with many current markets expanding and new markets continuing to be added,” he said.

During the quarter, Cheniere made its debut in the nascent carbon-neutral LNG market with a cargo supplied to Royal Dutch Shell plc. Cheniere said Tuesday it had worked with the Anglo-Dutch energy major to offset “the complete lifecycle greenhouse gas emissions” by purchasing credits from Shell’s portfolio of nature-based projects. The credits cover the estimated carbon dioxide equivalent (CO2e) emissions associated with activities upstream of the free-on-board delivery point, including production and liquefaction. The CO2e emissions from LNG were calculated using the UK Department for Environment, Food and Rural Affairs conversion rates, which find that 1 metric ton (mt) emits roughly 3.42 mt of CO2e across the value chain, including end use.

Cheniere is one of a growing number of LNG suppliers that have disclosed plans to lower their emissions. It plans to provide certificates disclosing information about emissions related to cargoes starting in 2022.

On the call, Fusco said the company has also investigated carbon capture and storage (CCS) at its facilities.

“CCS is important, our initial blush is that it looks very promising at our facilities,” he said. The company has committed “some real dollars” to look into its potential use at Corpus Christi LNG. “But I think our customers are going to expect us to continue to offer a sustainable LNG product.”

Feygin also said the company is “seeing increasing interest and engagement” from existing and potential customers on Cheniere’s low-carbon initiatives.