Cheniere Energy Inc. said Wednesday the amount of liquefied natural gas (LNG) it produced for delivery to Europe surged during the first quarter in a trend management expects to continue as the continent looks to diversify its supplies in a pivot from Russia. 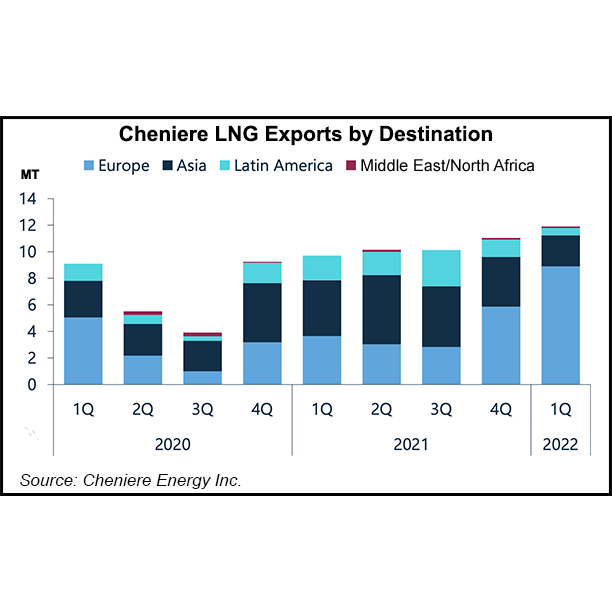 Chief Commercial Officer Anatol Feygin said Cheniere-produced cargoes supplied more of the super-chilled fuel to Europe than any other country during the first three months of this year. Roughly 75% of the LNG churned out during the quarter, or more than 150 cargoes, was destined for the continent.

“And we are just beginning,” said CEO Jack Fusco during a call to discuss financial results on Wednesday. “As Europe looks to reduce its dependency on Russian energy supplies and the administration looks to support our allies, the relevance and criticality of energy security, and the role of LNG and natural gas as a reliable, flexible and cleaner burning fuel, has never been more evident to customers and governments the world over.”

Europe has been the premium market for LNG since late last year. Asia stocked up heading into the winter, which left European storage inventories short, along with a reduction in Russian flows to the continent. Europe is also aiming to cut its reliance on Russia –  its top gas supplier – since the country invaded Ukraine.

Feygin said U.S. LNG accounted for nearly half of European gas imports during the first quarter. In all, domestic gas exports were up 23% year/year to 20.4 million tons during the period, helping to offset declines from other producers around the world, according to Cheniere.

Feygin added that the growth “has been supported by the strong call on LNG demand in Europe as well as new capacity additions, including Sabine Pass Train 6,” which Cheniere brought online in February.

As demand surged during the first quarter, Cheniere, the largest U.S. LNG exporter loaded 160 cargoes, or 585 trillion Btu (TBtu) of LNG. That compares with 133 cargoes, or 476 TBtu, loaded at the same time last year. Cargo loadings also were up from the fourth quarter, when they came in at 153.

The company also increased financial guidance on Wednesday. The forecast for distributable cash flow was increased to $5.5-6 billion from $4.3-4.8 billion. Fusco said the increase resulted from better margins on higher-than-forecast prices, more output on maintenance optimization and an accelerated ramp-up of the sixth train at Sabine Pass.

Maintenance optimization at the Sabine Pass and Corpus Christi terminals is forecast to create an extra eight cargoes for sale this year, Fusco said.

Bechtel Corp. has also begun  early engineering, procurement and site work for the Corpus Christi Stage 3 expansion project, which would add 10 million metric tons/year (mmty) of capacity at the facility in South Texas. Cheniere issued a limited notice to proceed with the expansion in March and expects to make a final investment decision this summer.

Chieniere also on Wednesday said it has another GSA, or what it refers to as an integrated production marketing (IPM) agreement, with an affiliate of Arc Resources Ltd.

Arc, one of Canada’s largest natural gas producers, would supply Stage 3 with 140,000 MMBtu/d for 15 years. Cheniere would pay Arc at prices linked to the Japan-Korea Marker after deducting shipping costs and liquefaction fees. The 0.85 mmty associated with the deal would be sold by Cheniere.

The company has similar deals with APA Corp. and Tourmaline Oil Corp. The IPMs, however, continue to have a negative impact on Cheniere’s earnings given the exposure to volatile international commodity prices.

Net profits declined in 1Q2022 because of an increase in derivative losses, or a wrong-way bet on natural gas prices related to the IPMs from changes in fair value and settlements of $3.5 billion. That offset a surge in revenue to $7.5 billion in the first quarter, compared with $3 billion in the year-ago period.