Cheniere Energy Inc. is in the early stages to again expand LNG export facilities in Louisiana and Texas following a series of supply deals that could underpin the next stage of growth, management said Thursday. 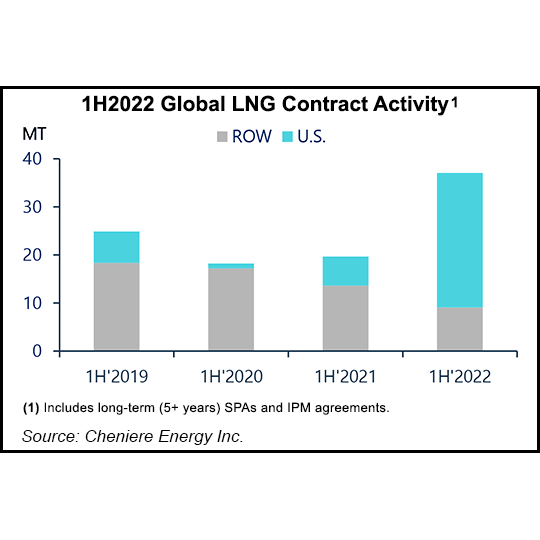 Chief Commercial Officer Anatol Feygin said the company has had its most productive year for liquefied natural gas contracting since 2011. In the second quarter alone, the largest U.S. LNG exporter signed sales and purchase agreements (SPA) to ship 140 million metric tons through 2050 to customers across the world.

The company has been “racking up frequent flier miles,” added CEO Jack Fusco during the call to discuss second quarter results. Cheniere, like other global LNG producers, has seized on high spot prices, supply issues and a pivot from Russian exports to sign the long-term deals that are the bedrock of its business.

Feygin noted that buyers across the world signed supply deals for 38 million metric tons/year (mmty) of supply during the first six months. U.S. LNG producers accounted for 28 mmty of those deals, “potentially underpinning a new round of LNG infrastructure investment” in the country, he said.

A contract signed in July to provide 1.8 mmty to PetroChina Co. Ltd. was Cheniere’s first that extends beyond 2050.

Fusco said management plans to provide an update about its growth plans later this year. Cheniere may add large- or small-scale liquefaction capacity at the Corpus Christi LNG export terminal in South Texas near the expansion sanctioned in June.

Meanwhile, a third marine berth is nearing completion at the Sabine Pass terminal in Louisiana, adding infrastructure that could help pave the way for more projects. A sixth liquefaction train came online at the facility earlier this year.

“You can be certain we’re pursuing growth at both facilities,” Fusco said.

Cheniere again increased its financial guidance because of the higher prices for LNG. The company loaded 156 cargoes, or 564 TBtu of LNG, during the second quarter. That’s up from 139 cargoes, or 499 TBtu, in the year-ago period.

Fusco also addressed regulatory hurdles facing the company that could potentially limit its exports. Reuters first reported in July that the company has requested an exemption from limits on carcinogenic emissions from some combustion engines.

The Environmental Protection Agency (EPA) earlier this year applied the rules to a type of gas-fired turbine used by Cheniere at the Corpus and Sabine Pass facilities. Cheniere is the only U.S. LNG producer using the equipment, according to the Reuters report.

Fusco acknowledged that the company is working with the EPA on the matter. The company is also conducting testing required by the rules.

“While we don’t believe our turbines should be subject to the rule as their use in LNG operations was not contemplated in the original 2003 rulemaking, we will work with the EPA and relevant state agencies to develop a path forward for compliance if applicable,” he said.

Revenue soared to $8 billion during the second quarter, more than double the $3 billion it reported in 2Q2021.

The company continued to incur steep noncash losses during the quarter related to its integrated production marketing (IPM) agreements. The deals require Cheniere to pay North American producers for gas supply at prices linked to the Japan-Korea Marker, which has seen record highs this year.