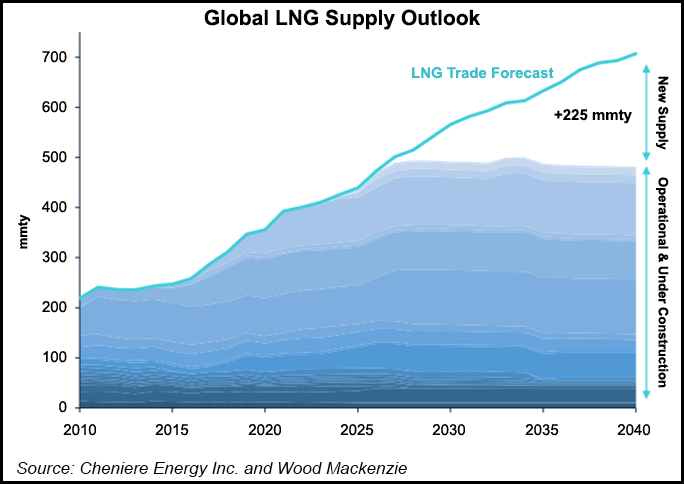 Executives said the Houston operator is focused on lining up commercial contracts for the expansion, which could add more than 10 million metric tons/year (mmty) to Corpus Christi’s capacity. The company is aiming to sign long-term contracts with “diverse credit-worthy customers from Asia, Europe and North America,” CEO Jack Fusco said.

Cheniere’s efforts to address environmental, social and governance issues have “real commercial application,” Fusco said, helping the company sign term deals this year. Among those efforts are steps to certify the emissions associated with its cargoes starting next year.

“Supported by a very strong LNG market backdrop, significant commercial momentum and major competitive advantages, we expect to FID Corpus Christi Stage 3 next year,” Fusco said. The project would come online about five years after sanction, according to the company.

Fusco’s remarks were made during an investor call to discuss Cheniere’s latest capital allocation plan, which outlines spending of $10 billion in distributable cash flow (DCF) through 2024. The plan puts aside $2 billion for equity financing for Stage 3, which would consist of seven modular trains.

The capital spending also calls for Cheniere to reduce debt by $4 billion and return $2 billion to shareholders through share buybacks and dividends. Cheniere plans to distribute its first-ever dividend later this year, a quarterly payment of 33 cents/share ($1.32 annualized).

“Funding of this initial dividend was important and reflects consideration of other capital allocation needs, such as balance sheet goals and growth opportunities, all of which represent a capital return to our shareholders,” CFO Zach Davis said during the call. “We anticipate revising the growth rate upward once our initial capital allocation objectives are reached by the mid-2020s.”

The plan also leaves $2 billion in DCF unallocated. Cheniere said extra capital could be used to accelerate paying off idebt or funding share repurchase goals “in the near term.”

Cheniere also plans to complete the sixth train at the flagship Sabine Pass LNG terminal in Louisiana and bring it online early nextx year. That would be about one year ahead of schedule and within budget, the company said.

Customers at Sabine Pass include Royal Dutch Shell plc, Total Energies SE and Vitol Inc. Fusco said the company has “committed” to adding another investment-grade contract to Sabine Pass “around the time it reaches completion on Train 6.”

Once complete, Train 6 would be the ninth liquefaction unit brought online by Cheniere. But the company indicated it could expand further at both Sabine Pass and Corpus Christi.

“Our land and infrastructure position at both sites can enable significant potential expansion opportunities through both debottlenecking and incremental infrastructure,” Fusco said. “We can leverage our expertise, people and existing infrastructure for this incredible platform we’ve built to develop cost-competitive future growth for many, many years to come.”