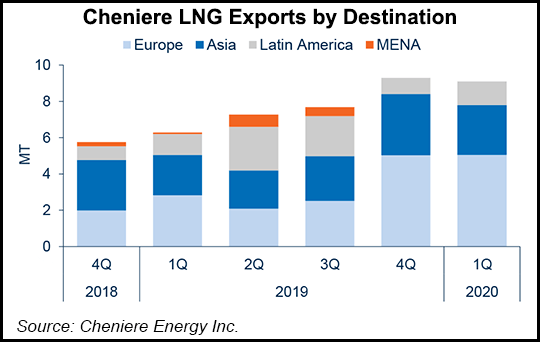 The largest U.S. LNG exporter has contracted 85% of its production under long-term, take-or-pay contracts that generally allow customers to cancel cargoes up to 60 days before they’re loaded. CEO Jack Fusco said the company won’t quantify how many cargoes were canceled, or “make it a practice to offer details about ordinary interactions with our customers.”

Given the economic upheaval caused by the pandemic, and the force majeures and cargo deferrals that have characterized the LNG market in recent months, Fusco also said the company has received “countless investor inquiries” regarding its long-term contracts.

“I remind you that our long-term contracts do not include provisions for renegotiations,” he said of term buyers pushing for price reviews as global benchmarks have nosedived. “We intend to meet all of our contractual obligations, and in return, we expect our customers to do the same.”

He stressed too that customers can’t declare force majeure because of the pandemic. Cheniere’s contracts “specifically exclude such events as the unavailability of, or any event affecting downstream facilities, changes in the customer’s market factors or other commercial, financial or economic conditions. As such, depressed gas prices globally, or decreased gas demand from Covid-19, do not provide a valid, legal basis on which a counterpart can claim” force majeure.

Cheniere noted that the Dutch Title Transfer Facility price in Northwest Europe plunged 50% year/year in the first quarter to an average of $3.35/MMBtu, while the Japan Korea Marker in North Asia declined 40% over the same time to average $4.82. Henry Hub also traded well below $2.00 during the quarter.

Global prices have hit new lows since then and more U.S. cargoes are expected to be canceled in the months ahead as the spread between key markets in Asia and Europe offers little incentive to deliver LNG from the United States.

Given the dynamics, Chief Commercial Officer Anatol Feygin said global final investment decisions (FID) for new capacity are likely to be impacted. Cheniere now expects 65 million metric tons/year (mmty) of capacity to be sanctioned in 2020 and 2021, or about half of what it had forecast before the coronavirus outbreak.

“We do include our Corpus Christi stage three expansion in these expected FIDs, which will be dependent on, among other things, obtaining sufficient commercial agreements to support the project.” he added.

The expansion project, approved by federal regulators last year, would include up to seven midscale liquefaction trains with a total capacity of around 10 mmty. Stage three, with the three trains operating or under construction, would boost total capacity to around 25 mmty at Corpus Christi LNG in South Texas. Construction is not expected to begin until supply agreements have been executed, something Fusco said requires “face-to-face combat,” which is challenging given the travel restrictions in place globally to help fight the pandemic.

The company also said it’s taken additional measures to protect workers against the virus throughout its operations. In April, Cheniere began utilizing temporary on-site housing for workers at its facilities and implemented marine operations with “zero contact” during loading activities, among other things. The company said it has spent $30 million responding to the outbreak.

Loaded LNG volumes increased in the first quarter to 455 TBtu, up from 309 TBtu in the year-ago period, but flat from 462 TBtu in the fourth quarter. Year/year volumes jumped as the company brought more trains online.