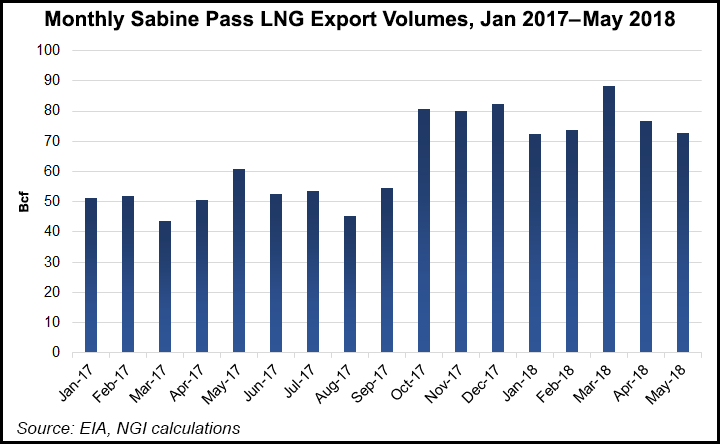 “Our results in the second quarter give us tremendous confidence heading into the balance of the year,” he said. The company reconfirmed adjusted earnings guidance to $2.5 billion from $2.3 billion and revised DCF to $515 million from $400 million.

“We continued to see robust and durable pricing in the LNG market even during the second quarter,” typically impacted by seasonality, a “trough period for LNG prices.”

Cheniere executives have discussed the “structural shift in natural gas and key demand centers around the world, which has been a meaningful driver in the LNG market for some time now,” Fusco said. “We continue to see evidence of this playing out as we expected, and in some instances, faster than we anticipated.”

Cheniere in May pulled the trigger for train 3 at the Corpus Christi LNG terminal, which is to be built on the South Texas coast. The positive final investment decision (FID) “reinforces Cheniere’s position as a leader in U.S. LNG.”

The addition of Corpus Christi once operational would increase Cheniere’s run rate DCF/share by an estimated 20%, the CEO said. Train 3 is backstopped by long-term contracts with three counterparties.

“The market continues to move in our favor,” Fusco said. “And our origination team is progressing commercial efforts on multiple fronts and in multiple geographies.”

Fusco does not expect proposed Chinese tariffs on domestic LNG to have an economic impact on existing contracts with China National Petroleum Corp.’s PetroChina subsidiary. The contracts in part helped trigger the positive FID for the Corpus facility.

In February, PetroChina agreed to buy about 1.2 mmty (around 0.16 Bcf/d) through 2043, with supplies to begin this year. Since then, China and the United States have escalated a trade war, with China adding domestic LNG to the list of prospective products that may be hit with a 25% import tariff.

“We don’t foresee an economic impact to Cheniere as it relates to our existing long-term contracts with PetroChina,” Fusco said.

“We are awaiting details of the proposed tariffs and are hopeful that the U.S. and China can resolve the trade dispute without these tariffs being implemented,” he told analysts. Domestic LNG is an “important variable to help resolve trade issues” with China.

Cheniere, which until Dominion Cove Point went into operation earlier this year was the only U.S. LNG exporter, and it remains the top seller. Today it operates four trains at Sabine Pass, with one more under construction, and three planned in Corpus.

Like potential LNG competitor Tellurian Inc., which reported its results Wednesday, Cheniere once again had a quarterly net loss.

Meanwhile, Cheniere and its U.S. LNG export peers received potentially good news on Thursday, as European Commission (EC) officials said they would travel to Washington, DC, later this month to meet with the Trump administration about importing more U.S. gas.

The meeting would be a follow-up from a meeting in July, when the European Union (EU) tentatively pledged to import more U.S. gas to diversify, as Russia is now its largest gas supplier.

“The European Union is ready to facilitate more imports of liquefied natural gas from the U.S., and this is already the case as we speak,” EC President Jean-Claude Juncker said on Thursday. “The growing exports of U.S. liquefied natural gas, if priced competitively, could play an increasing and strategic role in EU gas supply.”

According to EC data, Europe in 2017 received about 10% of total U.S. exports, double the number from 2016, with the opening of the Sabine Pass project. Since then, Europe has imported more than 40 U.S. cargoes, estimated to total 2.8 bcm.

“Since the arrival of the first U.S. LNG carrier in the Portuguese port of Sines April 2016 and today, EU imports of liquefied natural gas from the U.S. have increased from zero to 2.8 billion cubic meters,” the EC stated. By comparison, Russia in 2017 exported about 194 bcm to Europe via pipeline.

EC’s Miguel Arias Canete, who works on climate change issues, said increasing U.S. imports of “competitively priced liquefied natural gas” would boost diversification and security, and “is therefore to be welcomed.” European gas production is “declining more rapidly than foreseen, and there is an accelerated phase-out of coal power plants in the EU.

Juncker also reiterated that the United States needs to “play its role in doing away with red tape restrictions” on gas exports. “Both sides have much to gain by working together in the energy field.”