Frisco, TX-based Comstock Resources Inc. next year will turn away from the Eagle Ford Shale and Tuscaloosa Marine Shale (TMS) and spend more in the dry gas-rich Haynesville as it believes “improved completion technology, including longer laterals, will provide strong returns on drilling projects at current natural gas prices.” 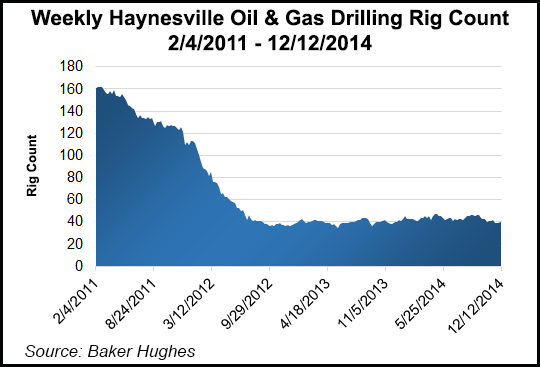 Investors shunned Comstock shares on Thursday, and one analyst wrote that anyone looking for exposure to natural gas should look elsewhere. Comstock shares closed down nearly 14% at $5.90 Thursday, far from their 52-week high of $29.49.

The company has budgeted $307 million in 2015 for its drilling and completion activities. In response to low oil prices, the company plans to suspend its oil-directed drilling activity in its Eagle Ford in South and East Texas and in the TMS in Mississippi. Kohlberg Kravis Roberts & Co LP is a joint venture partner with Comstock in its South Texas Eagle Ford program.

Comstock has released its rig in the TMS and will postpone its drilling activity there until oil prices improve. Comstock currently has four operated rigs drilling on its Eagle Ford shale properties. The company will release two of these rigs in early 2015 and will move the other two rigs to North Louisiana to start up a drilling program on its Haynesville gas properties.

Comstock intends to drill 19 (18.6 net) horizontal wells in 2015. The company expects to spend $161 million for drilling 14 (14.0 net) Haynesville/Bossier shale natural gas wells and $34 million for drilling five (4.6 net) wells on its East Texas and South Texas Eagle Ford shale acreage. The 2015 budget includes $49 million for completion costs of 13 (11.9 net) Eagle Ford wells that were drilled in 2014 but will be completed in 2015 and $63 million on facilities, recompletions and for other capital projects. Comstock plans to re-fracture 10 of its existing Haynesville producing wells as part of the 2015 program.

The company estimates that the program will generate company-wide oil production of 3.5-3.9 million bbl in 2015 and natural gas production of 55-60 Bcf.

“Like that observed with other producers, Comstock’s allocation of capital shows the economic breakeven sits above where the commodity is trading — that is, it shows what doesn’t work at today’s oil prices” BMO Capital Markets analyst Dan McSpirit said in a note Thursday.

“We’re not confident the natural gas operations tell a different story, despite the company’s aggressive move back to drilling dry gas wells. Something has to give. That means growth and and loss of momentum, potentially.”

McSpirit, who has a “market perform” rating on Comstock shares, said the latest plans from Comstock were a “negative,” and said his take on gas production next year is closer to 47 Bcf than the company’s estimated 55-60 Bcf. “Looking for exposure to the natural gas trade? In our view, this isn’t it,” he said.