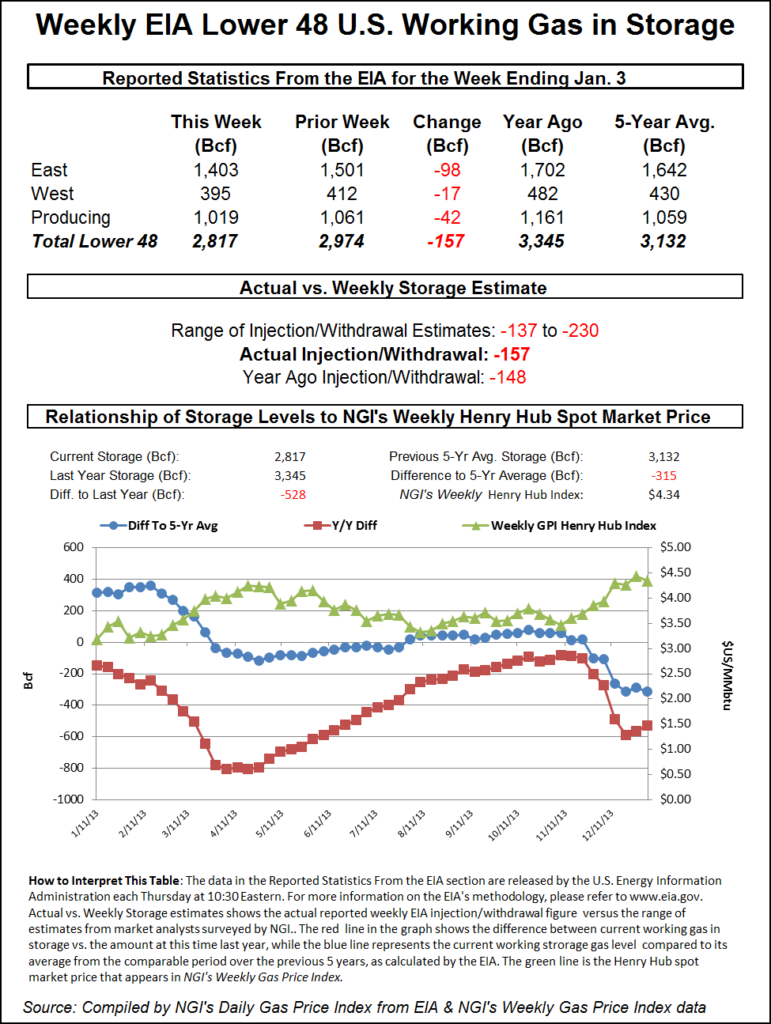 A pattern of cold and heavy precipitation meant Western U.S. hubs saw some of the largest gains for the week, particularly in the Pacific Northwest, where Northwest Sumas jumped 82.0 cents to $3.070. In California, Malin rallied 37.5 cents to $2.620; SoCal Citygate dropped 49.0 cents week/week but continued to trade at an elevated $5.190 on average as forecasts showed colder-than-normal conditions for the region.

Elsewhere, with unseasonably mild temperatures dominating over much of the eastern United States, Northeast prices languished at uncharacteristically low prices for this time of year. Algonquin Citygate finished the week at $2.590, up 17.0 cents. Tenn Zone 6 200L skidded 12.0 cents to $2.595.

Meanwhile, the prospect of a return to something resembling winter temperatures later this month provided enough impetus Friday to lift natural gas futures ahead of another potentially pivotal weekend of weather data. The February Nymex contract picked up 3.6 cents to settle at $2.202. Week/week the front month gained 7.2 cents after settling at $2.130 the previous Friday.

With disagreement between the American and European datasets Friday, guidance presented significant price risks depending on the weekend trends, according to NatGasWeather.

“Essentially, the latest European model still shows colder air into the northern U.S. Jan. 17-24 for stronger demand, just not nearly as cold/impressive” as the Global Forecast System (GFS), the forecaster said. “At issue is the GFS forecasted numerous frigid cold outbreaks in December that never came to fruition. That makes it risky going into the weekend, because what if the GFS happens to be correct this time and the European model trends colder to better match it?”

The pattern showed an “impressive” amount of frigid air over Canada, but the models need to persuade the market that it will push far enough south, NatGasWeather said. “That’s the weekend risk, because a little further shift south with the cold pool and the pattern will be increasingly bullish. A shift of a few hundred miles north” and the pattern “will quickly revert bearish.”

Prior to the report, the market had been looking for a print in the low 50s Bcf, with predictions ranging from minus 41 Bcf to minus 73 Bcf. A Reuters survey had pointed to a 53 Bcf withdrawal, while a Bloomberg survey had landed on a pull of 52 Bcf. NGI’s model had predicted a 51 Bcf withdrawal.

Bespoke Weather Services said it wasn’t reading too much into the report given the impact of the New Year’s holiday and some “tail-event warmth” during the period.

“We rarely read much into any holiday number, especially one with tail-event weather, and last week was super warm,” Bespoke said. “It may be that we simply underestimated holiday-related impact between Christmas and New Year’s Day. It may also be somewhat of a correction for the slightly bullish miss on last week’s report. Market is shrugging it off for now.”

Even after accounting for holiday impacts, the light withdrawal does keep the pressure on prices as the market enters what is typically the peak of the heating season.

“We just have ample supply and not enough demand and weather to sop it up,” Powerhouse President Elaine Levin said. “Winter is a time when, if we’re going to do it, we need to do it. And so far we’re not doing it.”

By region, the Midwest posted the largest net withdrawal at 20 Bcf, followed by a 15 Bcf pull in the East. The Mountain and Pacific regions each withdrew 7 Bcf for the week. The South Central posted a net injection, with a 10 Bcf refill of salt stocks offsetting a 6 Bcf pull from nonsalt.

“For the second straight week gas inventories reported a withdrawal well below the five-year average, and, unfortunately, we’re expecting much same again next week,” the TPH analysts said. “In total, the ugly three-week run is expected to result in cumulative draws 274 Bcf softer than the five-year average.”

In terms of ascribing blame for the “particularly ugly” 44 Bcf pull reported this week, “the finger can be squarely pointed at the weather, as degree days were 23% below normal levels, although cumulative degree days this withdrawal season are still 3% above the five-year average.” Even so, “persistent oversupply” has limited withdrawals to 9% below norms.

On a weather-adjusted basis, the TPH analysts viewed the 44 Bcf withdrawal as implying a 3.5 Bcf/d oversupplied market. “With no significant demand adds expected in the near-term, we continue to see supply reductions as being key to a balanced market.”

Forecasts calling for a “potent winter storm” over the central United States and parts of the Northeast proved enough to push spot prices at a number of hubs back above the $2 mark Friday.

“…Light to moderate snow over the Intermountain West and Rockies will spread eastward. A wintry mix of snow, sleet and rain/freezing rain is possible in portions of the Southern/Central Plains into the Middle Mississippi Valley and northeastward into the Great Lakes Friday into Sunday as temperatures fall. The heaviest rain/freezing rain is forecast over parts of the Great Lakes Saturday into Sunday.”

The strong front over the central part of the country was expected to create a “stark temperature gradient,” with warmer-than-normal temperatures ahead of the front affecting the Ohio and Tennessee Valleys into the Northeast, according to the NWS. Western U.S. regions were expected to see colder than normal conditions.

Planned maintenance on Equitrans LP’s Plasma Compressor Station, scheduled to begin Sunday and continue through next Friday, could restrict up to 252 MMcf/d of flows through Ohio, according to Genscape Inc. analyst Anthony Ferrara.

During this maintenance, and another planned maintenance event scheduled for Jan. 26-31, flows through the Plasma-OVC Meter would be limited to 573 MMcf/d, the analyst said. It may impact gas delivered to interconnects with the Rockies Express and Rover pipelines at the western end of the Ohio Valley Connector.

“Over the past 30 days, deliveries have averaged 796 MMcf/d and maxed at 824 MMcf/d,” Ferrara said. “For the first phase of this maintenance, Equitrans has cited Jan. 12 as the start date in a critical notice posted on Dec. 20 but cited a start date of Jan. 13 in the maintenance calendar posted” Thursday.

“At the start of December, snowpack throughout Washington state was running less than 41% of normal, with some areas in the central part of the state below 25% of normal,” Margolin said. “Since then, however, significant moisture events have generated low-altitude rains (which is bearish gas due to near-term hydro generation) and upper-elevation snows (bearish gas for spring and summer months).

“…While current snowpack levels are recovering relative to early December, it is worth noting that they still notably lag last year’s same-date levels, suggesting at this point in time that hydro generation may be slightly weaker than last summer,” the analyst said. “…That said, it is common to see just one or two storm systems pummel the region hard enough to radically boost snowpack in a short period.”