There are currently three commissioners at FERC, with a fourth recently nominated by President Trump, but Chairman Neil Chatterjee wants a full complement of five members on board to reach consensus on some major issues, including an ongoing review of the Commission’s pipeline approval process. 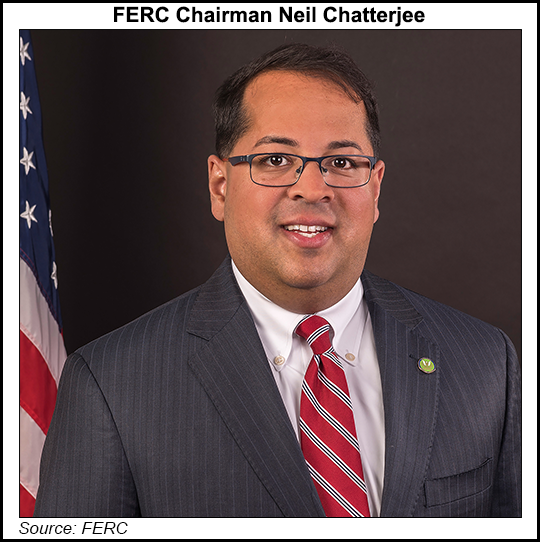 “For something as fundamental and significant as changing our pipeline approval process and a review of the 1999 certificate policy statement, that’s something that you need a full complement of five and consensus on to have durability for the future,” Chatterjee told reporters Monday.

“…To have long term durability and provide the certainty to all stakeholders in the process, we would want to have consensus among five members.”

Chatterjee spoke with reporters at the Envision Forum, hosted by the University of Kentucky Center for Applied Energy Research and the Federal Energy Regulatory Commission in Lexington, KY.

While current commissioners Richard Glick and Bernard McNamee were not in attendance at the forum, former members including Jon Wellinghoff, Colette Honorable and Rob Powelson participated. Chatterjee and the former commissioners all took pains to avoid discussing issues currently before FERC at the ex parte event.

FERC issued a notice of inquiry (NOI) last year to examine its policies in light of changes in the natural gas industry and increased stakeholder interest in how the Commission reviews natural gas pipeline proposals since it adopted its current policy statement on pipeline certification in September 1999.

“I want to make clear it could be that at the conclusion of the process we determine that our 1999 certificate policy statement is good law — that is one of the potential outcomes,” Chatterjee said.

Chatterjee also said he wants commissioners to come to a consensus on the definition of resilience in its ongoing examination of the resiliency of the nation’s power grid — an order FERC issued in the wake of its unanimous rejection in January 2018 of the Department of Energy’s (DOE) controversial notice of proposed rulemaking (NOPR). However, he said the current three-member FERC could make that vote.

“I would very much like to achieve consensus on something of this significance. Whether that consensus is 3-0 or 4-0 or 5-0 — as long as it’s ‘something-0.’ If we can get consensus among the three of us, I’m very comfortable moving forward.”

Earlier this month President Trump nominated James Danly, who is general counsel of FERC, to fill one of the two vacant seats at the Commission. Danly was nominated for the remainder of a five-year term expiring June 30, 2023, effectively replacing former commissioner and Chairman Kevin J. McIntyre, who died Jan. 2.

Like Chatterjee and McNamee, Danly is a Republican; Glick is a Democrat. By law, no more than three seats at FERC may be held by one political party. McNamee’s term expires next year; Chatterjee’s in 2021; and Glick’s in 2022.

The fifth, empty seat at FERC was vacated in August, when Cheryl LaFleur, a Democrat who had served on the Commission since 2010, stepped down.