Chaparral Energy Inc. is forming a drilling joint venture (JV) with Bayou City Energy to help fund development of its 110,000 acres in Oklahoma’s Sooner Trend of the Anadarko Basin, mostly in Canadian and Kingfisher counties (aka, the STACK). 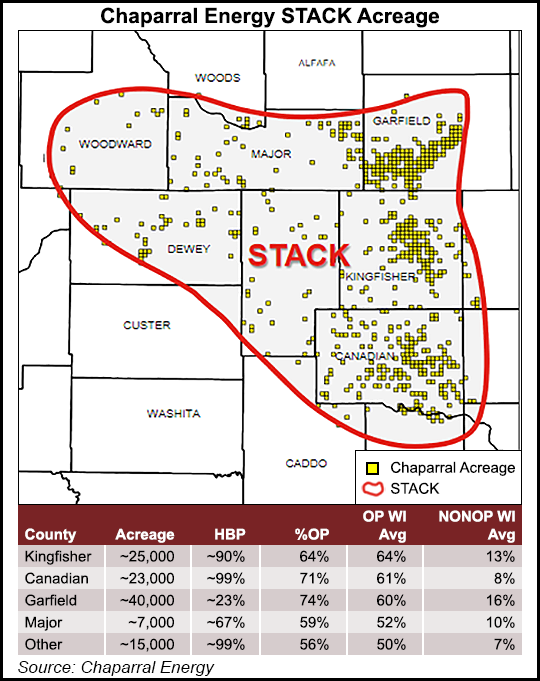 Under terms of the agreement, Bayou City is paying 100% of the drilling, completion and equipping costs associated with 30 STACK wells in the JV, subject to average well cost caps that vary by well-type across location and targeted formations, resulting in a maximum capital commitment of about $100 million for the first tranche.

The first tranche of wells, to be drilled and operated by Oklahoma City-based independent Chaparral, includes 17 wells in Canadian County and 13 wells in Garfield County, with the ability to expand the partnership to drill additional tranches in the future.

Chaparral would retain all acreage and reserves outside of the wellbore, with each party paying lease operating expenses based on relative ownership interests. Drilling has already begun on the first JV well, the companies said.

In April, Chaparrel said it would budget $135-155 million this year to develop its position in the STACK. Citing depressed commodity prices, Chaparrel filed for bankruptcy protection in May 2016 and exited Chapter 11 proceedings earlier this year $1.2 billion in debt lighter.