More than 100 local and state government officials from across Ohio have sent a letter to Gov. John Kasich asking that he support initiatives aimed at giving local communities more control over oil and gas drilling. 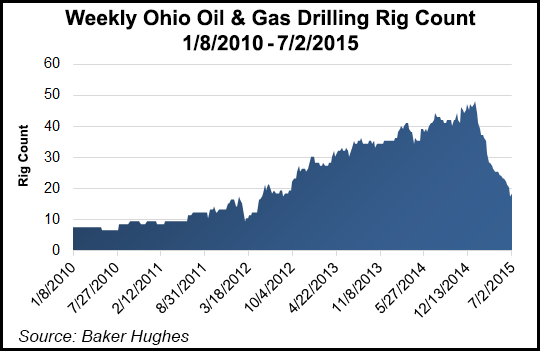 In the letter, the elected officials said they are deeply concerned about the “frenzied pace” and “growing threat hydraulic fracturing poses to our health and environment.” An overwhelming majority of the officials that signed the letter represent communities in which no high-volume horizontal hydraulic fracturing (fracking) has occurred. The officials, however, point to the truck traffic, industrial supply chain operations and underground injection wells that have fanned out across the state to support the unconventional oil and gas industry.

Some of those communities located in counties such as Summit, Cuyahoga and Medina have hosted conventional oil and gas drilling in shallower fields like the Clinton Sandstone. City council members and senators from larger cities such as Columbus, Akron and Cincinnati also signed the letter, which is being circulated by Environment Ohio, a group that has been critical of the oil and gas industry’s operations in the state.

The number of injection wells to dispose of the millions of gallons of oilfield waste generated in the Utica Shale has increased across the state. In the letter, the officials complain of growing amounts of that waste, along with criminal issues that they contend have increased and a spike in truck traffic related to the shale boom that has strained local roads.

Many communities, primarily outside the 13-county region in Eastern Ohio where Utica Shale drilling has been heaviest, have attempted to pass charter amendments to ban injection wells or fracking with limited success, while others have tried to enact zoning ordinances that would have more clearly defined where drilling could occur (see Shale Daily, May 7, 2014). In February, the state Supreme Court upheld the Ohio Department of Natural Resources’ (ODNR) preemptive authority to regulate the industry and said municipalities may not use their home rule powers to interfere with the state’s centralized regulatory role (see Shale Daily, Feb. 17; March 9).

“In the face of these grave impacts, and despite the Ohio Supreme Court’s recent ruling, communities continue to seek to halt or substantially limit activities within their borders,” the letter said. “The notion that our communities have the right to bar or limit activities which threaten public health or the quality of life of their residents has a long tradition in Ohio law.”

The group is asking Kasich to “declare…clear support for this right of local control here in Ohio.”

Meanwhile, in the Cleveland suburb of Broadview Heights, a community group known as Mothers Against Drilling in Our Neighborhood, has vowed to appeal a Cuyahoga County Common Pleas Judge’s decision to dismiss its lawsuit against the state for more local control. In 2012, the city passed a charter amendment banning oil and gas drilling. Earlier this year, a judge struck down that charter amendment in a separate case brought by two conventional drilling companies that challenged it (see Shale Daily, May 21).

While the city has said it has no legal grounds to challenge the ruling, especially after the Ohio Supreme Court’s decision, Mothers Against Drilling said both the federal and state constitutions give the community a right to more local control over the industry.