The U.S. Commodity and Futures Trading Commission (CFTC) levied a $225,000 fine against two entities of JPMorgan Chase & Co. (JPMC), the largest bank in the United States, for filing inaccurate large trader reports (LTRs) for physical commodity swaps positions for more than one year. 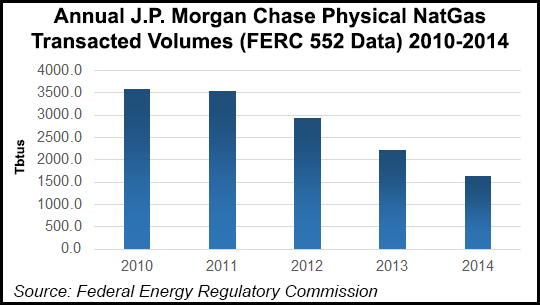 In an order filing issued Wednesday, the CFTC said one of JPMC’s principal bank subsidiaries, JPMorgan Chase Bank NA, and subsidiary JPMorgan Ventures Energy Corp., violated Section 4s(f) of the Commodity Exchange Act and CFTC Regulations 20.4 and 20.7 when they failed to submit accurate LTRs. The respondents were ordered to jointly and severally pay the penalty and to cease and desist from committing further violations.

According to the CFTC’s order, the respondents filed LTRs that “routinely contained errors” from at least March 1, 2013, through April 30, 2014. The errors included reporting the underlying commodity, futures equivalent months, and currency value strike price in the wrong data fields; reporting futures contract equivalents, commodity units, and notional values that were incorrect or missing; providing identifying information for principals that attributed positions to the wrong entities; and incorrectly reporting counterparty names.

The CFTC said the respondents also failed to submit LTRs on two days.

“As noted in the order, the respondents have made modifications to their data processing and reporting systems as necessary to comply with their LTR reporting requirements, have corrected errors as they were identified, and have submitted corrected historical LTRs,” the CFTC said.