Investment banks JP Morgan and Goldman Sachs Wednesday said they supported the Commodity Futures Trading Commission (CFTC) imposing federal position limits in the energy futures market to curb excessive speculation, but with one caveat — the limits should be on the ultimate holder of a contract, not the swap dealer when it acts as an intermediary between buyer and seller.

Blythe Masters, head of the global commodities group for New York-based JP Morgan, called on the CFTC to focus on end-use customers when imposing position limits across all markets — both over-the-counter (OTC) and exchange-based markets. “[Look] through [the swap dealer’s activities] to the end-market participant as you evaluate whether that specific participant is over or under a particular threshold or position limit,” she recommended.

“My layman’s read of your existing authority would suggest you have the power to do this. And if not, we would be supportive of legislation needed to achieve this,” she said during the second of three hearings into whether federal position limits should be set in the energy futures markets.

The CFTC should maintain the exemption from position limits for those who act as aggregators, such as JP Morgan, and impose a large trader reporting system for OTC positions, “just as is done for exchange-traded positions,” Masters said. “The aggregator or intermediary plays no net economic effect…All it does is facilitate aggregation activities, the meeting of the buyer and seller.”

Don Casturo, a managing director with Goldman Sachs, agreed that the CFTC should “[look] through the swap dealers to apply limits at the end-user level across derivatives and futures” markets.

“While it might often appear that a swap dealer has taken a large position in the futures market, in reality the swap dealer is using the exchange to manage the risk incurred in the capacity as an important intermediary in the OTC markets,” he said. “We’re just a passer.”

Swap dealers “have become the broadest source of liquidity for both commercial and non commercial entities and in so doing have provided more customized [forms] of risk managing products to end-users,” Casturo noted.

However, “we’re not advocating that Goldman Sachs have any special treatment. We should be held to the same at-risk level of position limits as any other end-user” when buying commodities, Casturo told the CFTC. Masters echoed the sentiment, saying JP Morgan was not asking for any special treatment either “other than in the area where we’re facilitating” a trade. “Where we’re not [an] intermediary, we shouldn’t be exempt from anything.”

The testimony came in the second day of CFTC hearings into the need for position limits on speculative trading in finite commodities markets. A third hearing is scheduled Aug. 5 (see Daily GPI, July 29).

Tyson Slocum, director of the energy program for public watchdog Public Citizen, called for the CFTC to establish “strong effective” position limits across all markets and for all products, reaching into swap dealers and index funds. He emphasized that the CFTC, not the energy exchanges, should impose position limits.

“We believe that the lack of effective position limits [in energy markets] has allowed the accumulation of too much market power and has limited effective competition in these markets, and allowed a handful of very powerful entities — two of which are seated here at the table today, Goldman Sachs and JP Morgan — to take very large positions in underregulated format,” he said.

“We are aware of no credible academic study or analysis that demonstrates the presence of noncommercial interests in commodity markets has been detrimental,” said Masters.

Slocum urged the agency to “only provide exemptions [from position limits] for bona fide commercial interests…folks that can demonstrate they have a direct financial interest in hedging their risks.”

As for the OTC market, Slocum suggested that the CFTC “should explore whether or not…it can use [its] emergency authority to reach into the OTC and try to effectively regulate that market.”

In addition, “we must urgently work with Congress to [secure] additional resources to effectively police our markets,” he said. 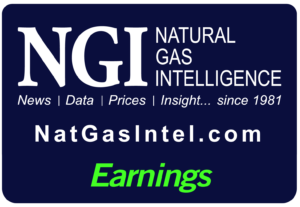 Natural gas and oil operators are likely to report a return to normalcy — but not growth — when they unveil their third quarter results in the coming weeks, and demand forecasts may be hazy amid a historic hurricane season and the expanded wave of damaging Covid-19 infections.  Schlumberger Ltd., the world’s largest oilfield services…