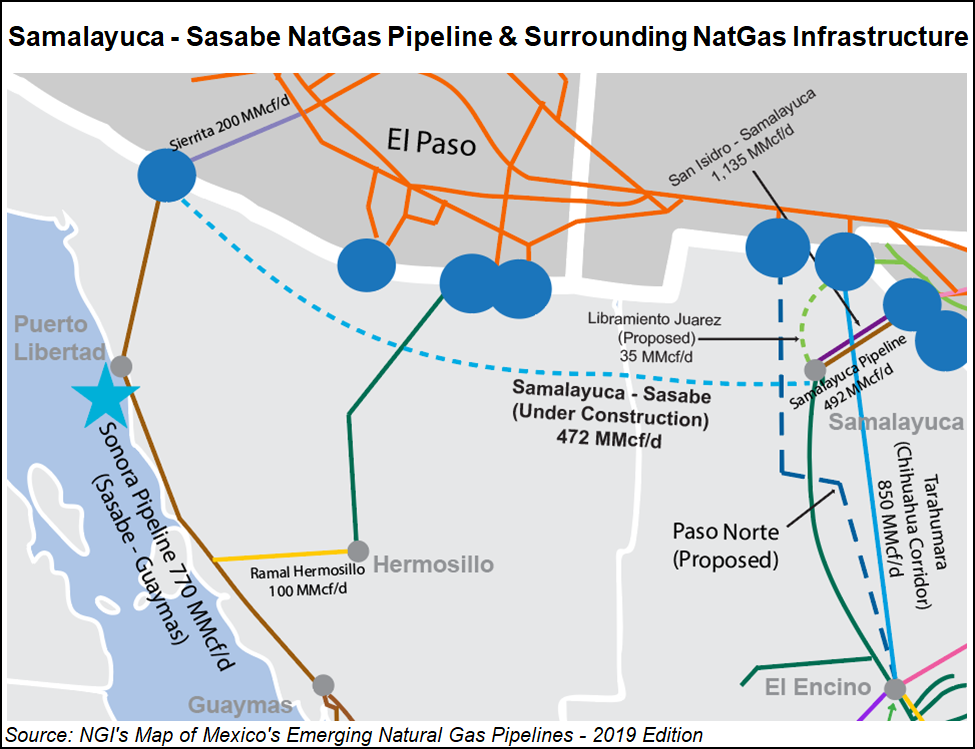 CFE is the anchor client of Carso Gasoducto Norte’s (CGN’s) 472 MMcf/d Samalayuca-Sásabe pipeline under construction in Chihuahua and Sonora states.

In its first quarter earnings report, Carso said the $570 million pipeline is about 70% complete and expected to enter operation in 1Q2020. Work on the project is currently halted because of delays in receiving the necessary rights of way to continue, Carso said.

Carso said in the filing Wednesday it is analyzing the content and legal foundation of the arbitration request from CFE.

The announcement follows a similar revelation this week from Infraestructura Energétic Nova (IEnova) that CFE is impeding the start of commercial natural gas flows on the recently completed 2.6 Bcf/d Sur de Texas-Tuxpan marine pipeline, which IEnova developed with TC Energy Corp. The litigation could soon extend to other CFE-anchored pipelines under development in the country.

Although construction of the pipeline is complete, and initial line packing and testing have begun, commercial operations cannot begin until CFE signs off on the official start date, a notice that CFE “has not yet emitted,” IEnova said.

Instead, CFE on Monday sent IMG a request to begin arbitration to modify the contract’s force majeure clauses, and to obtain reimbursement for the capacity payments it has already made to IMG.

CFE “is demanding the annulment of certain clauses of the transport services contract, which make reference to the responsibility of the parties in events of…force majeure, as well as the reimbursement of capacity payments related to said events which CFE initially recognized in line with the contract, and now considers undue,” IEnova said.

IEnova also said that the request to begin arbitration “in no way impedes” CFE from allowing the start of commercial gas flows on the pipe.

President Andrés Manuel López Obrador and CFE General Director Manuel Bartlett Díaz have repeatedly called for the renegotiation of contracts for delayed pipelines, such as TC Energy’s Tuxpan-Tula and Tula-Villa de Reyes projects, arguing it is “unfair” that CFE should have to make capacity payments for pipelines that are not operating.

Developers, including IEnova and Carso, have countered that they won the contracts through transparent public tenders designed by CFE itself, and that the force majeure clauses are standard practice around the world.

Despite the arbitration proceedings, pipelines should still be able to go into operation, according to analysts contacted by NGI’s Mexico’s GPI. “Still, we don’t know what CFE will choose to do,” energy expert and former energy regulator Meney de la Peza said.

Canada’s Mexico Ambassador Pierre Alaire, tweeted Wednesday, “I am profoundly worried by the recent actions of [CFE] and by the signal they send that, despite the declarations of [López Obrador], Mexico does not wish to respect the gas pipeline contracts.”

López Obrador said in his Wednesday morning press conference a deal “would be reached,” but maintained that the contracts were “abusive,” and that he would “defend the assets and the interests of the Mexican people.”

Although gas from the pipeline would not yet be able to flow directly to the peninsula, its commercial startup would nonetheless free up national oil company Petróleos Mexicanos (Pemex) to send more of its gas production in southeastern Mexico to CFE’s Yucatan power plants, Talanza Energy Consulting’s David Rosales, midstream and downstream partner, told NGI’s Mexico GPI recently.

Rosales tweeted Wednesday that the latest dispute “puts at risk the supply [of gas] to the Yucatan,” adding, “It’s time to call the parties to dialogue and to find in arbitration a definitive solution that defends the value of this infrastructure for Mexico.”