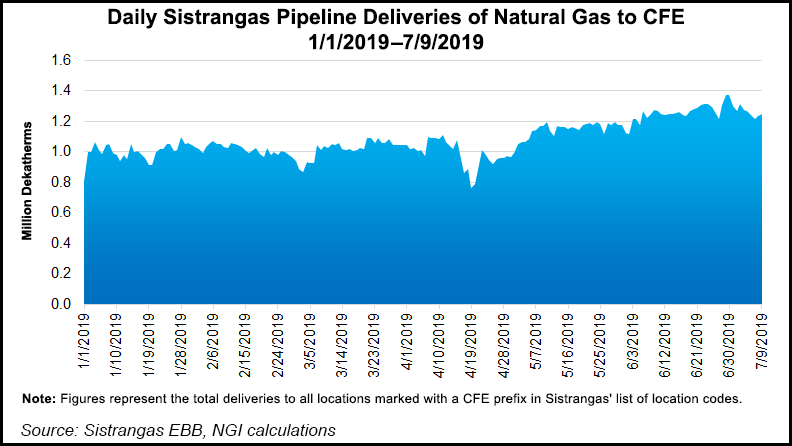 CFE on July 1 disclosed that it had filed seven arbitration requests, six in London and one in Paris, pertaining to seven pipeline projects for which CFE is the anchor client, and which have faced delays for varying reasons.

All of the reasons, however, presumably meet the contracts’ criteria to be considered force majeure, Ruiz told NGI’s Mexico GPI, which is why CFE has had to make capacity payments to the developers despite the fact that the pipelines are not yet in operation.

President Andrés Manuel López Obrador and CFE general director Manuel Bartlett Díaz have publicly called the contracts unfair and abusive on repeated occasions, and demanded that certain clauses be renegotiated or removed entirely. The state-owned firm is seeking compensation for the fixed-capacity charges it has paid already, as well as reimbursement for the arbitration costs.

However, Ruiz said, “it’s very difficult for CFE to allege that a clause is abusive, because CFE prepared the contract, CFE put it on offer in a tender, and CFE awarded it.”

“What I think CFE will try to do is to say that these contracts were [awarded] under a previous administration, but for the arbitrator, it’s the same CFE,” said Ruiz, who specializes in the development of oil and gas projects, and represents both Mexican and international companies before Mexican governmental bodies and regulatory agencies.

Before disputes of this nature reach arbitration, there is typically a conciliation period of 20-30 days, Ruiz said, during which the top executives from all of the firms involved try to reach an agreement that satisfies all parties.

López Obrador’s office said on Monday that conciliation talks between CFE and the developers had begun.

Representatives of Mexico’s Consejo Coordinador Empresarial (CCE), a group representing the private sector, and the secretive, but by all accounts very powerful Consejo Mexicano de Negocios (CMN), or Mexican business council, were also present “as observers,” the government said.

At the meeting, CFE and the developers established objectives and a timeline “to advance in conversations and reach agreements that satisfy all parties in benefit to the nation,” the government said, adding that each of the firms will meet bilaterally with CFE over the coming days.

Ruiz, however, was less optimistic.

“I think that every case is different, because each company could take a different position,” Ruiz said. “But I think very probably, some of these cases are going to end up in arbitration, and it will be long and costly.”

He added that “in the end, I see very few possibilities for the CFE’s arguments to prevail.”

The dispute over the marine pipeline has generated the most concern in Mexican business circles, due to its importance for the gas-starved Yucatán Peninsula, and the fact that its construction is complete.

IEnova and TC Energy announced in June that work on the $2.5 billion project had concluded. However, CFE has refused to sign off on a start date for commercial operations.

Bartlett has said that allowing the pipeline to operate would “legitimize” the “unfair” contract that anchored its construction. IEnova has said that there is no reason why the dispute should impede the pipe from operating and transporting badly needed gas from Texas to Mexico.

Multiple business groups have denounced the marine pipeline conflict, and called for a speedy resolution for the sake of Mexico’s economy.

Employers’ association Confederación Patronal de la República (Coparmex) on June 27 expressed its concern “over the arbitration processes initiated by the Comisión Federal de Electricidad (CFE) … that could impede the placement in operation of the Sur de Texas-Tuxpan pipeline, which aims to bring [gas] to the south-southeast zone of the Mexican republic. This fact … increases uncertainty around investments in our country and negatively impacts the economy.”

Industrial chambers Concamin and Canacintra, as well as commerce and tourism chamber Concanaco Servytur, all expressed similar sentiments, highlighting the risk of continued blackouts in southeastern Mexico if the gas supply issue is not resolved.