Mexico’s Comisión Federal de Electricidad (CFE) has signed yet another deal with a private sector firm to increase natural gas transport in the country. 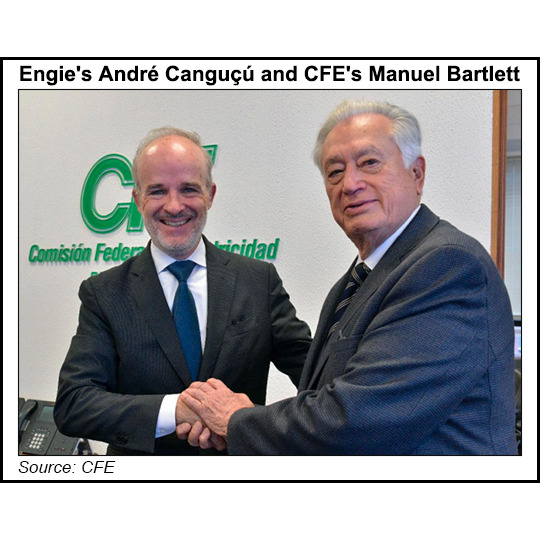 This time it’s with French company Engie SA. The two firms will work together to expand capacity on the 483-mile, 250 MMcf/d Mayakan pipeline, in the Yucatán Peninsula.

The Engie trunkline now stretches from its interconnection to the national pipeline Sistrangas in Reforma, Chiapas, via the newly completed 250 MMcf/d Cuxtal I interconnect, to Valladolid, in the upper Yucatán Peninsula. Cuxtal has room to expand to 500 MMcf/d.

Engie has previously indicated that the Mayakan could also be doubled in capacity. Executives have also said they were looking to expand the pipeline to Cancún, in Quintana Roo state.

The Yucatán has faced natural gas shortages in recent years, leading to problems with electricity supply. Natural gas demand is set to rise with the development of the Mérida IV and Valladolid IV combined cycle plants, adding capacity of more than 1,500 MW.

CFE executives said they were “celebrating an agreement that would allow the parties to agree on the technical and commercial terms for the execution of an expansion of the Mayakan gas pipeline.”

They said the pipeline, which came online in 1997, can supply six CFE generation plants.

“However, with the entry into operation of the two new generation plants, as well as the expectation of future demand for natural gas in the region, it is imperative to develop additional natural gas transportation infrastructure that meet the needs of the area.”

The 1.3 Bcf/d, $4.5 billion Southeast Gateway Pipeline, set to come online in 2025, would supply fuel to the project.

Average pipeline flows on the Mayakan for the past year have been 0.163 Bcf/d, according to NGI calculations. This comes out to an average capacity utilization of 69%.

An Engie spokesperson told NGI, “This agreement allows progress in the development of the Mayakan expansion, and when the time comes, the details of the project will be announced. We are collaborating with CFE to design a solution to provide a definitive response to the additional natural gas transportation infrastructure that is required in the southeast and that meets the needs of the Yucatán Peninsula.”

CFE CEO Manuel Bartlet said this kind of public-private agreement “strengthened the strategic position of the CFE at the national and international level, in addition to contributing to the economic and social development of the country.”

Speaking earlier this month at LDC Forums’ annual US-Mexico Natural Gas Forum in San Antonio, CFEnergía head Miguel Reyes echoed a similar sentiment. He said the CFE and international firms were putting problems behind them and would now work together to solve natural gas problems.

CFEnergía is the international marketing arm of CFE. The majority of the natural gas used in Mexico is sourced via pipeline from the United States.