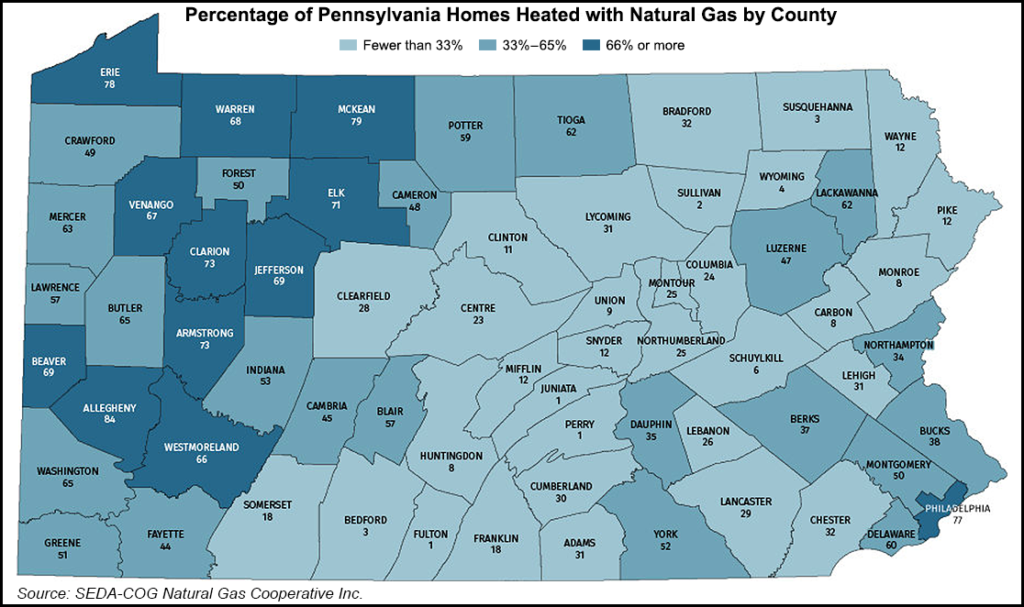 Juniata County passed a resolution to join the nonprofit SEDA-COG Natural Gas Cooperative and will pay $20,000 for membership.* The cooperative was formed by Clinton, Centre and Mifflin counties in June 2016. Juniata joins about three months after Perry County became the cooperative’s fourth member county.

The Susquehanna Economic Development Association Council of Governments (SEDA-COG), which serves eleven counties in the region is also a member. The cooperative is one of the latest efforts in both the private and public sectors to utilize more of the natural gas produced in the Marcellus and Utica shales in-state.

While more than half of all homes in many counties in the state use natural gas, 33% or less of the homes in central Pennsylvania use the fuel for heating, according to the U.S. Census Bureau’s 2014 survey. At the time, only 1% of homes in Perry and Juniata counties used natural gas.

Despite an abundance of natural gas distribution companies operating in the state, it has been too costly for some to connect more rural homes. By joining together, the counties have more power to attract state grants and funding for projects. Groups of businesses and residential neighborhoods can also join the cooperative.

Natural gas production set a record in 2016, when shale drillers helped push volumes to 5.1 Tcf. Some of Pennsylvania’s leading private and public sector economic development organizations have stepped-up their efforts to expand markets for that production, which has created more opportunities for the state in power generation, manufacturing and transportation.

*Correction — The original version of this story incorrectly stated the fee that Juniata County must pay to join the SEDA-COG Natural Gas Cooperative. The membership fee is $20,000.

The U.S. Energy Information Administration reported an injection of 66 Bcf The result was lower than expected and helped sustain a rally LNG volumes ticked back up to 6.0 Bcf Natural gas futures soared for a second consecutive day on Thursday after a light storage build provided a positive surprise and liquified natural gas (LNG)…