The advance guard of the natural gas revolution in Central America is in place, led by AES Panama SRL and Engie SA in Panama with El Salvador’s Energia del Pacifico Ltda de CV (EDP) waiting in the wings. 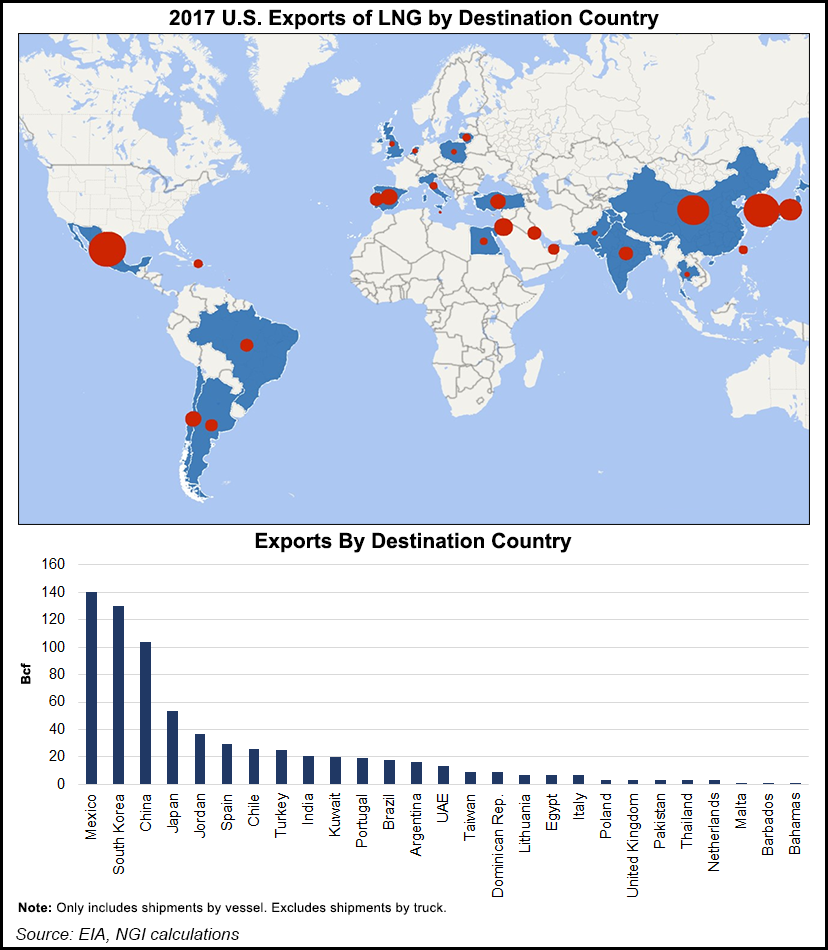 The first cargo of liquefied natural gas (LNG) to the region was delivered earlier this month to the AES-Engie 50-50 joint venture at its $1.15 billion liquefaction facility and 380 MW power plant, known as Costa Norte, which is nearing completion in the Panamanian province of Colon, near the mouth of the Panama Canal.

A floating storage regasification unit (FSRU) is to be used for testing purposes for several months.

The importance of the arrival of natural gas cannot be over-emphasized in Central America, whose economies, with the modest exceptions of Costa Rica and Panama, are among the poorest in the region. Nor do they have any hydrocarbons, except a dribble of crude produced in Guatemala.

Costa Rica’s former Energy Minister Roberto Dobles, long an evangelist for natural gas in Central America, told NGI’s Mexico GPI that “countries that fail to advance in the transition toward a world in which natural gas is the principal source of energy, will simply be left behind.”

AES and Engie got the message; their power plant is to use about 0.4 million metric tons/year (mmty) of LNG. The remainder of the 1.5 mmty capacity is to be distributed throughout the region, using trucks or FSRU. With the facility’s strategic location adjacent to the Panama Canal, the LNG could also be used as ship fuel.

Engie said sales of LNG from Costa Norte through Central America of up to 0.7 mmty would be sourced from the Cameron LNG project underway in Hackberry, LA, a joint venture led by Sempra Energy that is due to come on stream next year.

The AES-Engie alliance already has an operation in the Dominican Republic, the 1.5 mmty Andres regasification facility.

Together with Costa Norte in Panama, the alliance would have 3 mmty capacity, with the bulk of it for industrial customers, to meet small-scale demand and provide bunkering services throughout the Caribbean basin.

Inversiones Bahia, a Panama-based holding company whose interests include retail, airlines, finance and media, contributed 49% of the Costa Norte investment.

Panama has an installed power capacity of 3.38 million MW, of which 2.2 million is firm.
The project in El Salvador is on track to launch operations by late 2020, EDP’s Alejandro Alle, executive director of the locally based unit, told NGI’s Mexico GPI.

The aim is to build a 378 MW combined-cycle power plant and regasification terminal on the Gulf of Fonseca that would meet about a third of the country’s current power needs.

EDP’s partner in the project is Chicago-based Invenergy LLC, whose $800 million stake is expected to help fund construction from the International Finance Corp.

A unit of Royal Dutch Shell plc is to supply the LNG at a cost indexed to Brent, not Henry Hub, which Alle said should have financial advantages over the price of the fuel used by most power plants in the region.

Why use LNG at all? Mexico, after all, has been promising to pipe natural gas to Central America since the beginning of the century when Vicente Fox was Mexico’s president.

That promise was never realized, however, simply because Mexico had no natural gas to spare. Under current Mexican President Enrique Pena Nieto, several meetings of top officials discussed plans for a pipeline running 600 kilometers (373 miles) from Salina Cruz on Mexico’s Pacific Coast to Escuintla, Guatemala, and possibly Honduras and beyond. No formal announcement has been made, but that project has also been quietly shelved.

Shell would supply the LNG for the Acajutla project from its global portfolio, Alle told NGI’s Mexico GPI. “It’s up to Shell to choose the best option, for any particular shipment,” he said.

The closest LNG supplier to Acajutla could be Cheniere Energy Inc.’s Sabine Pass LNG facility in Louisiana, which already is in operation, via the Panama Canal. On the Pacific side, it would be Peru, without the expense of crossing the canal. Either way, deliveries could take four to five days.