Natural gas has never made much of a mark in Central America, but in September the fuel will open a new frontier when a combined-cycle generation plant comes onstream, officials of AES Corp.’s AES Panama told NGI. 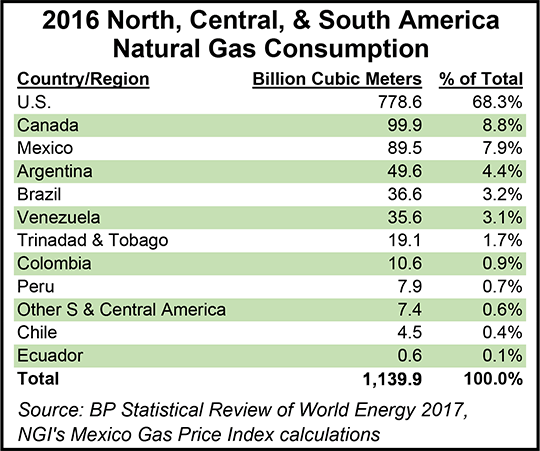 The inauguration of the plant scheduled Sept. 1 is to be followed by completion of the construction of a liquefied natural gas (LNG) reception and storage terminal with 170,000 cubic meters of capacity, or about 6 MMcf.

The 381 MW plant and LNG terminal are being built on Telfers Island in the province of Colon, about 80 kilometers (50 miles) north of Panama City and within sight of the Panama Canal.

Until the import terminal is completed, a floating unit would supply the gas to the plant, AES Panama spokeswoman Crisly Florez told NGI.

Bolinga claimed that consumers should be enthused by the news.

“Once the plant reaches maximum capacity, electricity tariffs will be cut by 8% to 10%,” he said.

Investment in the entire project amounts to $1.15 billion, of which AES Corp. has contributed slightly more than half. The rest was provided by Inversiones BahÃ­a Ltd., a privately held holding company that has varied interests, including retail, finance and media.

Engineering, procurement and construction of the overall project was conducted by Posco E&C of South Korea. The power is to be delivered to Panama’s state owned utility Etesa. The LNG would be provided by France’s Engie under what is reported to be a 10-year contract.

Engie’s LNG business is being bought by France’s Total SA. And on a related note, Engie and AES two years ago had struck a 12-year joint marketing agreement, targeting the Caribbean for LNG sales.

Bolinga told the journalists that only a quarter of the capacity of the receiving terminal would be used for the plant. Dozens of potential clients for the remaining gas from Panama and the rest of Central America have already been in touch, he said.

Central America, save for a handful of bbl a day of crude oil in Guatemala, has no hydrocarbon resources. Except for Costa Rica, a beacon of political stability in Latin America, and Panama, with its Canal, the other countries are poverty stricken.

What is known as the region’s Northern Triangle — Guatemala, El Salvador and Honduras — have some of the highest homicide rates in the world, generated by violent gangs and drug traffickers.

This week the U.S. State Department called for the Triangle’s leaders to attend one of what are becoming regular summits in an effort to resolve their difficulties.

Nicaragua’s beauty has huge tourism potential. It was also peaceful until late last month, but then it was plunged into crisis when long-standing President Daniel Ortega — ironically a former rebel leader — ordered cuts in pensions and other social benefits. The result was a social explosion in which several people have been killed in daily protest marches. The Roman Catholic Church is currently promoting a national dialogue to resolve the issues.

Meanwhile, the region has sensibly opted for alternative energy, rather than bunker fuel, its traditional stable. But, of the alternative sources, only geothermal provides firm supply, which is why Costa Rica’s former energy minister Roberto Dobles is a strong advocate of the use of natural gas in Central America.

Panama, with the AES project, and El Salvador, with a similar one that is in the pipeline, “are really taking the lead in Central America by developing natural gas to fuel power plants,” Dobles told NGI.

Lots of people talk in Central America about diversification of energy sources, he wrote. However, the introduction of natural gas “is real diversification.”